¶ In Switzerland, says BLDGBLOG, winter is sculpted "by one wizard-like figure who is really just a stoned twenty-something in a wool hat, turning different parameters on and off and spraying whole new European landscapes into existence outside."

¶ Staying with Europe for a moment, this article comes from the British newspaper The Telegraph, but it is written by an American and reveals, among other things, what teenage girls do in hunting blinds. "How one nature lover was converted to deer-hunting: Could an ethically minded carnivore be converted to the law of the gun in his pursuit of organic meat in the Mississippi Delta?"

¶ How people panic during a disaster, most of them anyway. (Via Peter "Bayou Renaissance Man" Grant.)
Posted by Chas S. Clifton at 5:22 PM No comments:

The most common language heard at the SHOT Show is Upland Southern English, followed by German.

Apparently to succeed in the firearms industry, it is helpful to sound like you come from Arkansas — or Arnsberg.

I have also overheard several varieties of Spanish, e.g., terse Argentinian around the Bersa booth — plus Portuguese, Swedish, Chinese, Turkish, Japanese, Italian, Arabic, and some that I could not be sure of (Hindi?).

German, Italian, and British firms are clustered in national pavilions, with Germany's being the largest.

There are enough Turkish firearms firms to fill a pavilion too, although the man whom I spoke to at the Trabzon booth seemed cool to the idea. We prefer to be spread out, he said.
Posted by Chas S. Clifton at 1:23 PM 1 comment:

The Gun, by Vicki Feaver

Vicki Feaver (b. 1943) is a British poet. According to her listing in the Poetry Archive, "Feaver includes the stuff of everyday life in her poems - jam-making, gym classes, ironing - but grafts them onto the transgressive power of fairy-tale and myth."

Author's note: I lived in Brixton in central London for twenty years and though I sometimes heard gunshots I never actually saw a gun. But now living in Lanarkshire, Scotland, right in the middle of the country, I see lots of guns. Almost all the men seem to have a shotgun. And then my own husband got a shotgun and brought it into the house, and at first I felt very afraid of it and then gradually my whole attitude changed as I describe in this poem.

Bringing a gun into a house
changes it.

You lay it on the kitchen table,
stretched out like something dead
itself: the grainy polished wood stock
jutting over the edge,
the long metal barrel
casting a grey shadow
on the green-checked cloth.

At first it's just practice:
perforating tins
dangling on orange string
from trees in the garden.
Then a rabbit shot
clean through the head.

Soon the fridge fills with creatures
that have run and flown.
Your hands reek of gun oil
and entrails. You trample
fur and feathers. There's a spring
in your step; your eyes glean
like when sex was fresh.

A gun brings a house alive.

I join in the cooking: jointing
and slicing, stirring and tasting—
excited as if the King of Death
had arrived to feast, stalking
out of winter woods,
his black mouth
sprouting golden crocuses.

from The Book of Blood (Jonathan Cape, 2006).
Listen to her read the poem.

Leather gaiters or not?

And the dog is "wrong" too.

A minor dust-up in The Telegraph over alleged anachronisms in the costuming of a shooting party during the British stately-home soap opera Downton Abbey.

I am sitting here with my first cup of coffee only half an inch down, trying to think of American equivalents.

A group of Colorado big-game hunters in the mid-1960s, all wearing blaze orange? Back then, a red cap was considered sufficient for safety. It probably still is in Vermont.

Conversely, duck hunters all in brown coats or tan coveralls in a scene set any time after the 1970s?

Help me out, the caffeine has not yet kicked in.
Posted by Chas S. Clifton at 8:43 AM 3 comments:

What Do You Think about Falconry?

Two British researchers, Helen Macdonald (University of Cambridge) and Mike Nicholls (University of Greenwich) have created an online survey on people's understanding of falconry and their opinions about it.

Although some questions are particular to the UK, respondents from other countries are welcome.
Posted by Chas S. Clifton at 11:47 AM 2 comments:

We May Hear More Claims Like This over Wind Turbines

An English farming family is going to court over the noise from wind turbines near their home.

Granted, North America has more wide-open spaces for turbines, but I could see something similar happening here too.

Meanwhile another  British study shows that the real money in wind farms is not so much selling electricity as it is selling the "renewables obligation certificates" to owners of fossil fuel-burning power plants.


Quite often windy periods come when demand is low, as in the middle of the night. Wind power nonetheless forces its way onto the grid, as wind-farm operators make most of their money not from selling electricity but from selling the renewables obligation certificates (ROCs) which they obtain for putting power onto the grid. Companies supplying power to end users in the UK must obtain a certain amount of ROCs by law or pay a "buy-out" fine: as a result ROCs can be sold for money to end-use suppliers.

And that comes from a study funded by the John Muir Trust.

Mega-renewable energy projects seem to be mostly about gaming the system, whether it's wind turbines in Scotland or huge solar projects in American deserts, built because the voters demanded "green energy," and big utility companies build big projects.

This Photo Was Not Taken in the American West 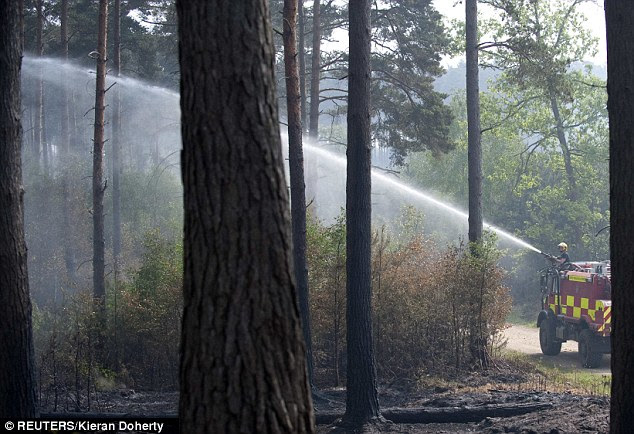 Rather, it was taken in the United Kingdom—in Wales, to be precise. The UK has a series of wildland fires burning, in England and Scotland as well as Wales. Several seem to have been started by teenage boys. More photos at the link.
Posted by Chas S. Clifton at 2:10 PM No comments:

Blog Stew on the Skids

• I'd do it. H.P. Lovecraft action shooting.

• Something other than the usual Colorado fishing photos.

• The Suburban Bushwacker goes deer hunting in Sussex. The link is to the last of the series, so click to the main site and scroll down.
Posted by Chas S. Clifton at 9:26 AM 2 comments:

• Diseased French chipmunks threaten Britain. It's in the Daily Mail, so it must be true. The chipmunks are not really French, however, but Siberian. What a relief.

• Mary Scriver scans a bat, possibly a diseased bat. It is not, however, a French bat.

• Patrick Burns has a few issues with Wendell Berry and what Burns calls "entertainment agriculture."

• Like most outdoor writers I have known (and me when I was one), Chad Love blanches at the tsunami of sheer gadgetry (which he is expected to promote), but he still thinks there is something innately valuable in hunting and fishing themselves.
Posted by Chas S. Clifton at 9:36 PM No comments:

Snowballs and the Nanny State

Deluged with unexpected amounts of snow, the British media are full of breathless reports of danger, chaos, and a shortage of "grit," both literal and metaphorical.

And the BBC attempts to answer the question of what to do if one is a target of snowballs.

"We sometimes don't know how to respond to something like a snowball. Some adults feel it demeans their dignity and compromises their status. All their pent-up anger, all the times their boss has had a go at them, can be unwittingly released when they are hit on the head by a snowball. But if you respond too pompously, you're likely to be hit by 20 more [says 'a leading expert in body language and social behaviour'].

"And in our era of the nanny state, if you decide to join in the fun and throw a snowball back at the children, and it happens to contain a stone or too much ice, will you get into trouble?"

Thank goodness there is always a leading expert when you need one.

Mellors, is that you?

The 2009 Lords, Ladies & Gamekeepers calendar is now for sale.

Interview with a Gamekeeper

The Guardian, which occupies a somewhat similar (perhaps even more leftward) place in the British media spectrum to that of NPR's All Things Considered in the United States, interviews a British gamekeeper.

"A lot of people don't really understand what we do," he says. "The bottom line is, I'm not going to deny it, we're rearing game birds to shoot. People think we're murdering bastards, just killing things. But they don't see the benefits of it ... you're more likely to see songbirds out on a shoot than you are on non-managed land, where the predators at the top of the tree are the ones surviving."

If your word association with "gamekeeper" is "Lady Chatterley," then you are probably an NPR listener--as am I. But the arguments that Geoff Garrod makes are what an American would expect to hear from the local district wildlife manager, game warden, etc.
Posted by Chas S. Clifton at 11:44 AM No comments:

After 13 years' residence in the Wet Mountains of Colorado, I have my own personal weather lore that says it usually snows only one more time after the first broadtailed hummingbird arrives.

The first male hummer arrived on Wednesday the 13th. Dare we hope? It has been a long, snowy winter.

I usually think of "invasive species" as a New World problem, but here is archaeological evidence of the introduction of rabbits to Britain by the Romans, a significant change to that island's ecosystems>. (Via the archaeology blog Cronaca.
Posted by Chas S. Clifton at 9:56 PM No comments:

Email ThisBlogThis!Share to TwitterShare to FacebookShare to Pinterest
Labels: archaeology, birds, Britain, rabbits
Older Posts Home
Subscribe to: Posts (Atom)
"The point was no longer to show one's hardihood. The point was to be there."