A new meme has been going around news media lately, the "liberal prepper."


The signs of change are surely in the air. Groups that cater to gun-toting bleeding hearts — such as the aptly named Liberal Gun Club — say they’ve seen a surge in paid membership since the election. Candid talk of disaster preparedness among progressives is showing up on social media. Even companies that outfit luxury “safe rooms” — which protect their wealthy owners from bombs, bullets, and chemical attacks — attribute recent boosts in business to the incoming administration.

Terrified by the so-called "Trumpapocalypse," this (presumably) Hillary voter is stocking up on guns and canned food — example: Colin Waugh of Independence, Mo., an "unapologetic liberal . . . no fan of firearms."

Read the article, watch Colin Waugh make a string of newbie mistakes, but don't be too judgmental.

And remember, we don't say "survivalist" any more; we say "prepper."

For instance,  Waugh has been "browsing real estate listings in Gunnison County, Colorado, which he’s determined to be a 'liberal safe-haven.'"

Does he know that the average low temperature this month in Gunnison is -6° F. (-21° C)?  Does he know how short the growing season is? Or how expensive the college town/resort-area real estate is?

In the event the "Trumpapocalypse" occurs, does he plan to drive 750 miles across lawless prairies to his Secret Mountain Hideout?

He would be a lot better off staying in Missouri. I recommend Moniteau County. It's close by, has no large cities, and land is much more affordable.

To protect himself against "state-sanctioned roundups of Muslims, gays, and outspoken critics," Waugh has purchased two guns, a 9mm pistol and an unspecified shotgun.  I hope that he gets some serious instruction and practice with them. Start with the assumption that everything you see in movies and TV about guns is wrong. (People do not fly through the air when shot, for one thing.)

Taking care of yourself and yours is a good plan. Government cannot do it — at least when disaster first strikes. Even with good resources and planning, it takes at least 48 hours for the wheels to turn, and that is a best-case scenario.

(As a member of my county's emergency services board, I have seen plenty of planning and discussion, not to mind that I have been evacuated from my home four times in the last eleven years.)

As blogger Liz Shield writes, "Are we sure this guy isn't one of us? . . . . Welcome to the world of 'taking care of yourself and your family.'"

Anyone who is serious about self-defense, about food, and about general preparedness — "keeping your wits about you," etc. — is going to be a more effective citizen and less of a drain on public resources.

Unfortunately, bullets will not stop a Missouri ice storm.
Posted by Chas S. Clifton at 7:14 PM No comments:

What People Are Missing from this Story?

M. and I are spending the long Thanksgiving weekend with her siblings and their spouses in a rented "chalet" on Table Rock Lake in southern Missouri—all imitation log siding, cathedral ceilings, stuffed animals (M. not too keen on them), and rustic lodge-themed art of the Hobby Lobby variety.

It's been all feasting and sleep, which is what we needed after the stressful last two weeks.

Yesterday she and I broke off from the group and hiked around in Table Rock State Park, adjacent to the big 1950s dam that created this impoundment with its 700-plus miles of shoreline. (Purposes: flood control on the White River, hydropower, recreation.)

Then we visited the Corps of Engineers visitor center at the dam. The historical exhibit began with the Osage and other Indian tribes . . . and then suddenly it was 1954. Nothing from the early 1800s until the 1950s.

Apparently the people living here then were just "dumb hillbillies" not worth memorializing except for a brief video appearance as victims in the Great Flood of 1927.

Assuming that eminent domain was employed to get the land that would be flooded, some people must have left their farms and businesses in sorrow, cursing the federal goverment.

Perhaps others took the money with delight and never looked back. Maybe others sold to private buyers for what seemed like a lot of money, while the buyer made much much more selling what would become prime lakeside building lots.

Whatever the stories are, the Corps of Engineers is not telling them.


After all, the Blue Ridge dwellers were not only different from the mainstream of American society, but, according to one contemporary journalist, their existence in the dark hollows represented "about the limit of destitution at which human life could be sustained." Park promoters and government officials publicized the fact that "these people will be moved to more civilized regions of agriculture and industry."

I suspect that the attitude of officialdom towards the Ozarks residents was much the same, but you will not find out at the Dewey Short Visitor Center.
Posted by Chas S. Clifton at 10:30 AM 5 comments:

A long time ago—three dogs ago—M. and I passed through Hermann, Missouri, after visiting my sister's farm in southeastern Missouri. We bought some white wine—most of the local wines were whites—and had a picnic.

Later, after the same sister moved up to Little Dixie (Randolph County), she took Dad and me to Les Bourgeois winery, and I discovered that Missouri did offer some drinkable reds (although it is indicative that Les Bourgeois' best-selling red, Riverboat Red, is described as "a tantalizing blend of raspberry and cherry aromas, this chilled sweet red dazzles the palate with rich layers of ripe fruit."

Last week, M. and I visited three Missouri wineries: Les Bourgeois, Adam Puchta, and Hermannhof, the latter two in the German immigrant-founded town of Hermann, whose wine-making history goes back to the first half of the 19th century. We also had a bottle of Stone Hill's Norton varietal wine one night at dinner.

All of these wineries' dry red wines rely on the Norton grape, grown by Thomas Jefferson at Monticello and introduced to Missouri around 1860.


Well adapted to sweltering Midwestern summers, the grape became very popular in the [Missouri] area. Several nurseries along the Mississippi River began selling seedlings, especially in and around the tiny town of Bushberg, just east of Pevely. Catalogs from 1870 proudly advertised Norton, which by that time had already become one of Missouri’s most popular grapes.

In the 1920s, prohibition shut down the entire American wine industry. European wines regained preeminence on the world stage, a position they have been loath to relinquish ever since. But now, with American wine making a comeback, Norton is gaining momentum. “It has made a remarkable recovery,” noted Laszlo Kovacs of the Mid-America Viticulture and Enology Center, located in Mountain Grove, Mo. He specifically praised Norton as an “American grape that can be made into a premium-quality wine.” He’s not the only one in on this secret – today, Norton is the most widely planted red grape in the state.

We tasted Norton-based wines at all of these vineyards, and they all have a family resemblance. I lack the fancy vocabulary of a wine writer, but compared to the California wines that I am used to, the Nortons tasted "grape-ier" (My favorite was Adam Puchta's "Legacy.") It's not a bad taste, just different from the "big" California reds that I am used to.

We brought a few bottles home and will try them out on our wine-loving friends.

This post's title invokes the real Emperor Norton.
Posted by Chas S. Clifton at 12:01 AM 2 comments:

Across the Wide Missouri (2)

Faced with a big river, I keep trying to get a good photo of it. Visiting the Les Bourgeois winery at Rocheport, Missouri, for the first time in several years, I discovered that they had built a new restaurant. 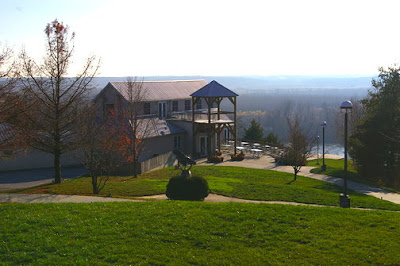 If you walk down to the edge of the bluff past the building and look upstream, you see this: 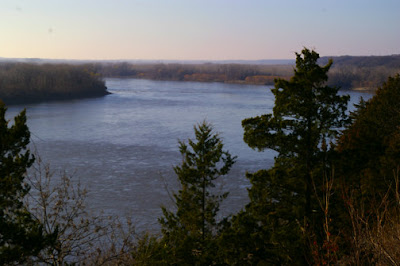 If that view doesn't make you feel like you want to be in a boat heading upstream (or down), I don't know what would.

Next, a few thoughts on the wines.
Posted by Chas S. Clifton at 2:48 PM No comments:

Across the Wide Missouri (1) 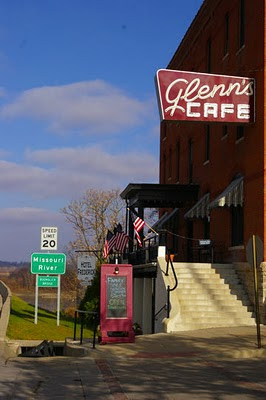 Like the late, lamented Steel City Diner in Pueblo, Colorado, Glenn's Cafe in Boonville, Missouri, hides a white-tablecloth restaurant behind a proletarian name. M. and I ate there Tuesday night and liked it.

Just out of the photo to the left: the Boonslick Bridge across the Missouri River.
Posted by Chas S. Clifton at 10:04 AM No comments:

Off to the Boone's Lick Country

M. and I are packing for a trip to the Boone's Lick Country. For the next week, this may be a cross-country photo blog.

Some small business related to my late sister's estate remains in Little Dixie, but I don't think that I need to see Moberly, Huntsville, or for that matter Clifton Hill, again.

To put ourselves in the mood, we watched Winter's Bone. Of course, that is southwestern Missouri, not the central part. No similarities, nope, not at all, no sir.

But in addition to family, we intend to focus more on historic hotels, sightseeing, and wineries.
Posted by Chas S. Clifton at 9:23 PM 2 comments:

Email ThisBlogThis!Share to TwitterShare to FacebookShare to Pinterest
Labels: Missouri, travel
Older Posts Home
Subscribe to: Posts (Atom)
"The point was no longer to show one's hardihood. The point was to be there."