Look an Eagle in the Eye, February 3–5

In our "wildlife taxi" volunteer gig for Colorado Parks & Wildlife, M. and I frequently make runs to the Raptor Center in Pueblo.

Too often, we are facilitating an injured hawk or owl's rendezvous with a hypodermic needle. But sometimes there is good news and we get to release a rehabilitated bird.


At the center of this whirl stands Raptor Center director Diana Miller, and the Colorado Springs Gaztte has an article about her: "Raptor center gives southern Colorado raptors a second chance at survival."

The ICU sees roughly 250 birds a year - about half of which are released back into the wild after a few months in captivity, said Diana Miller, director of the center.

"They get hit by cars, they get electrocuted on power lines, they get hung up on barbed wire," Miller said. "There's a million things that can go wrong. It's not an easy life when you're out and about."

Miller and some volunteers will be center-stage again next weekend during Pueblo Eagle Days on the 3rd through 5th.

Stop by the state park headquarters at Pueblo Reservoir and see if you have what it takes to look an eagle in the eye.
Posted by Chas S. Clifton at 7:00 AM No comments:

Who Came to the Gut Pile?

On the afternoon of November 5th, I walked out the back door and hiked to some burned-over BLM land about 45 minutes from the house.

Maybe it was my scouting and camera work at "Camera Trap Spring," maybe it was the red gods' favor, but about an hour after leaving home I shot a mule deer buck, three points or four points (Western count), depending which side you looked at  — not a huge buck, but since I would be backpacking the meat out, that was OK.

I boned the meat and filled my Osprey Talon 22 day pack past its design specifications, I am sure, but it's a tribute to that design that it still felt comfortable, even though heavier than I had ever loaded it.

The next morning I returned — with a larger pack —carefully glassing the area as I moved through the burnt pines, lest a bear have found the gut pile, bones, etc. No, just a few crows were flying around and talking.

So would a bear or other scavengers come? One way to find out — I brought a scout camera with fresh batteries, piled bones, hide, rib cage, and skull with the guts — and set it to cover the scene.

Today, twenty-four days later, M. and I went back for it. The deer's remains had been rearranged considerably.

The well-nibbled rib cage and spine were a few yards away, downhill. The hide was in several pieces, and the head was not immediately visible.

The slideshows are 19 MB and 16 MB, so if you don't want to load them, see highlights below.

The bear came later. An ear-tagged bear, meaning it has been relocated once — not like there is any vacant habitat.

The golden eagle made multiple visits.


Of course there were lots of crows visiting, and a couple of ravens and a red fox. And other deer walked past the scene unconcerned. 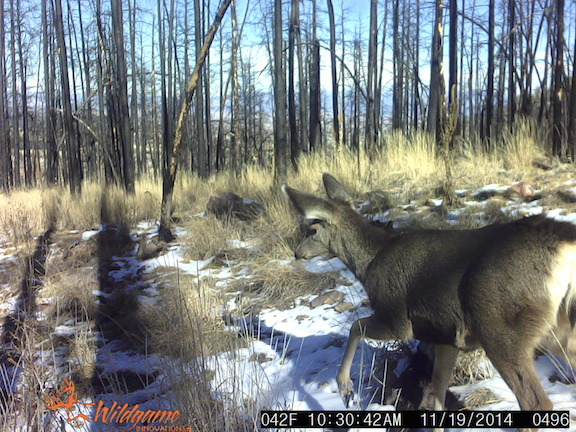 Email ThisBlogThis!Share to TwitterShare to FacebookShare to Pinterest
Labels: bears, deer, eagles, hunting, photography
Older Posts Home
Subscribe to: Posts (Atom)
"The point was no longer to show one's hardihood. The point was to be there."