The Cult of "Ute Prayer Trees"

Finally, a take-down of the whole "Ute Prayer Tree" legend that has been getting too much of a hearing up and down Colorado, particularly in the Ute Pass area (west of Colorado Springs, e.g., Woodland Park, Divide, etc.)

"Bent Trees Part 1: Pseudo-archaeologies" was published last week on the What's Up, Archaeology? group blog. The author, Holly Kathryn Norton, is the Colorado State Archaeologist, and this is only Part 1 of her fisking of this contemporary "old Indian legend."

As you walk through a forest in Colorado, or anywhere else, really, there are trees that have not grown straight. In Colorado, particularly in the Pike’s Peak region of the Front Range, a contemporary mythology has grown around these trees. The myth takes many forms but the foundational logic is that these trees were purposely bent by the Ute Tribe, and the name given to the trees hints at why proponents of the practice think the Ute bent the trees- Prayer trees, burial trees, spirit trees, grandfather trees, marker trees, vortex trees, trail trees. The names change as the loosely formulated hypothesis are challenged by both professional archaeologists and the Ute themselves.

A little basic forestry combined with knowledge of history disproves a lot of it. I have made this same challenge to "prayer tree" proponents: Take a forester's increment borer, pull a core, and count the rings. Any ponderosa pine tree "modified" by the Utes on the Eastern Slope of Colorado ought to be at least 150 years old. If it's only 70 years old, then forget it. And if you know pine trees, you will know that many of the trees so described are far too young to have been modified by old-time Ute people.


There have also been serious questions about the age of individual trees that have been identified as “Ute Trees.” Core samples taken a couple of years ago on a tree that was identified as a “prayer tree” aged the tree to 67 years old, well after the Utes were forcibly removed from the Front Range to reservations in the Southwestern part of the state, nearly 8 hours away by modern car travel. I was personally told that this age is not accurate because “bending trees causes the DNA in a tree to change, so modern dendrochronology no longer works for aging a tree.” These kinds of arguments are just false, but no amount of fact-checking can refute such a blatant disbelief in scientific information.

And yet . . . and yet . . . this desire to see Ute Prayer Trees (or for some people, trees modified by Bigfoot) is what people have always done, seeing the spiritual side of nature and trying to put a name and face on it, whether it's dryads or Druids or you name it.
Posted by Chas S. Clifton at 3:44 PM 4 comments: 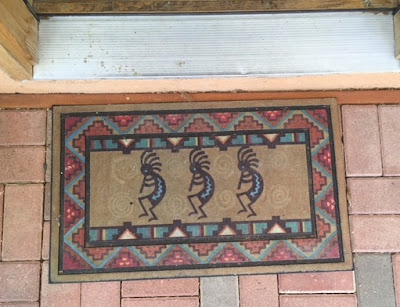 The rented Taos apartment's doormat depicts Kokopelli, "hump-backed flute player," a fertility deity of some Southwestern tribes. And here he is, minus the erect penis of some old-time images, reproduced in synthetic fiber — probably in China. (His "hump" may originally have been a sack of goods for trading.)

And you're wiping your feet on him, you racist, you cultural appropriator.

I don't care. When I see him, I know I'm in my home region, and that's what matters. Lift a glass to Kokopelli, be he god, culture hero, or Aztec pochteca. I am not one of those people who thinks that sacred matters must be kept at arm's length. He is here.

When culturally appropriating, grasp firmly with both hands and shake.
Posted by Chas S. Clifton at 9:08 PM No comments:

Email ThisBlogThis!Share to TwitterShare to FacebookShare to Pinterest
Labels: folklore, Indian tribes, New Mexico, Southwest, Taos
Older Posts Home
Subscribe to: Posts (Atom)
"The point was no longer to show one's hardihood. The point was to be there."