Links Taller than Your Head

Links. Do I have links. They sprout like sunflowers on the prairie.

• How to improve your outdoor photography. 10-2-4 is not about Dr. Pepper — 2 p.m. is when you are traveling to the place that you wish to photograph after 4 p.m. And "Zoom with your feet" does not apply to buffalo.

• Predatory ducks. It's Romania, so maybe they suck blood as well.

• How older elk survive to a ripe old age (for elk).  They learn the difference between bowhunters and rifle hunters.

• A poacher goes down hard. If only this happened more often.

• Another article on bold, aggressive urban coyotes. Denver, this time.

• High country trails don't just happen. It takes people like this.
Posted by Chas S. Clifton at 9:26 PM No comments:

I have never fished John Martin, but I have tried it for waterfowling with mixed success. When it is high like this, you can find some cover and improvise a blind.

But when it is low,  the best areas are surrounded by a wide margin of boot-sucking mud. I wonder how far down the original bottom is under the the silt that has washed in.

HASTY, Colo. - The wet Colorado spring at John Martin Reservoir has allowed something that hasn’t been seen for quite a while: high water levels.

That means it’s a great time to visit the park. There’s plenty of room for boating in the reservoir that now spans roughly nine miles long and two miles wide. There's also 200-plus campsites and nearly five miles of hiking trails to explore.

"The reservoir hasn't looked like this in a long time," said Park Manager Dan Kirmer. "If you haven't been to the reservoir before or haven't been in awhile, you definitely need to come check it out."

Boat, picnic and fish at this peaceful oasis known for its wildlife. John Martin Reservoir is also considered a birdwatcher's paradise with almost 400 species documented in Bent County.

Beat the crowds and long lines at boat ramps at other reservoirs across the state and enjoy the open water at John Martin Reservoir. While the dock at the east boat ramp had to be closed, boats can still launch and both the east and west boat ramps remain open.

The reservoir is letting in water at a rate of around 3,900 cubic feet per second and is releasing at a rate of about 820 cfs, so the high water levels will remain for a while.


I write ths in Valentine, Nebraska, on my way home from the hunting trip to North Dakota. As I blogger earlier, Galen and I were weathered out for the first two days.

On day two, reconnaissance continued, and the rain let up enough to sneak up on some sloughs. Result for me: one mallard.

The next day — Saturday, the nicest day of our four-day hunt — we went off to see Farmer Dennis. He packed us into his pickup truck and took us on a 30-minute tour of his land ("I often see pheasants here when I'm working this field"), other huntable nearby land, a federal duck-protection area, and for a bonus, his gun room and collection of military memorabilia.

Finally free of his friendliness, we drove to a promising section of prairie grassland across the road from a harvested corn field, unloaded the dogs and started walking. And walking. And nothing of game bird size flew up.

So we moved a couple of miles to "this field," pushing through its brushy edges and some shelter belts. No birds but a harrier, which startled me when it swooped low over my head. Fisher munched some fresh moose turds, while I wondered what he (and I) would do if a moose loomed up in the shelter belt.

We decided that maybe the pheasants were still "dug in" after the windy, rainy days. Or maybe we just needed one of those big Midwestern pheasant-hutning productions with drivers, flankers, and blockers.

But the conversation was good, the skies were immense, and I got my annual dose of prairie.

Maybe in the end it was only an $800 duck, but whatever it cost, it was worth it.

Before I left for North Dakota on October 1st, Galen told me to expect cooler weather than on our previous years' September grouse hunts. Luckily I checked the forecast too, which predicted warmer weather.

Oh yeah. Like stiff breezes from the south and temperatures into the 80s F. Most un-North Dakota, but good for drying out the corn, beans, and sunflowers for harvest, I suppose. Somehow I ended up with both sets of waterfowling gear—the heavy neoprene waders and the light unlined hip boots, the insulated parka and the lightweight jacket, etc. Plus long underwear, wool pants . . . I am notorious for over-packing, but this was ridiculous.

Ducks were not yet migrating, so we ended up jump-shooting some of the abundant sloughs. Finally the last evening we did a "proper" decoy set and killed our last three ducks (one mallard, two teal) in the final seconds of legal shooting light.

Cry Damnit and Release the Dogs of Corn

As for the sharp-tailed grouse, this past severe winter and wet spring and summer might have hurt reproduction. I had one shot at one and missed it. The funny thing was that the grouse we were seeing were flying above and into standing corn, not in the prairie grass where we had found them before.

You are not supposed to hunt standing crops without the owner's permission, so we did not. Certain dogs might have been encouraged to run down the rows, however.

But the dogs did not want to go more than about three rows in. Perhaps they find the cornfields to be disorienting and spooky. 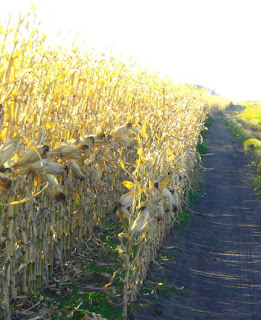 This was my fourth North Dakota bird hunt, and I coming to believe that the presence of Hungarian partridge is advertised in order to sell licenses to gullible out-of-staters, but that they do not actually exist.

Likewise, I have seen ungulate-type droppings and large rounded hoof prints and am informed with seeming sincerity that they are made by moose.

No doubt the shelter belts and abandoned farmsteads are swarming with them, but I always happen to be looking in another direction. Perhaps they are snoozing moosily in the sunflower fields.

But I will be happy with my duck dinners.
Posted by Chas S. Clifton at 11:44 AM 1 comment:

DENVER, Colo. - The Colorado Division of Wildlife is soliciting original artwork entries for the 2011 Colorado Waterfowl Stamp Art Contest. This year's species of focus is the green-winged teal (Anas crecca). The deadline for artists to submit entries is 4 p.m., Friday, March 4.

"It is amazing every year to see what the artists come up with and to see the new artists that are starting out in this specialized category of art," said judging committee member Tilman Bishop, a former state senator who sponsored the legislation that created the waterfowl stamp in Colorado.

The Colorado Waterfowl Stamp program was implemented in 1990 and provides funding to conserve wetlands for waterfowl and other wetland-dependent wildlife. Waterfowl hunters 16 years of age and older are required by state law to purchase a waterfowl stamp validation annually before hunting. In addition to hunters, many collectors aid in wetland conservation by purchasing collector stamps and prints that are created from the winning entry.

"We are all beneficiaries of the Waterfowl Stamp," Bishop added. "Whether you are a hunter, a bird watcher or just a citizen that likes seeing birds around the house, every one of us gets the benefit of this terrific program."

The green-winged teal is a colorful duck found in Colorado primarily during fall and spring migration, with lower numbers during the breeding season and winter. The vocal and often noisy duck is the smallest North American 'dabbling duck', which feed on the surface of waters instead of diving for food. It is one of the most frequently harvested ducks taken by Colorado waterfowl hunters, and is known as excellent table fare.

Artists must submit a 13-inch high by-18 inch wide, full color original artwork for the contest. There is a $50 fee for each entry. Complete requirements are explained in the application packet.
Posted by Chas S. Clifton at 8:00 AM No comments:

From a Division of Wildlife news release:

Each year, the Colorado Waterfowl Stamp Program holds a contest for original waterfowl artwork to be depicted on the Colorado waterfowl stamp. A stamp and a print of the stamp are created for sale to waterfowl and wetland enthusiasts, bird watchers, and stamp and print collectors. The funds are used for wetland projects that benefit ducks, geese, shorebirds and other wetland-dependent wildlife species. The first place winner will receive $3,500, second place receives $1,000 and third place receives $500. Entries will be accepted through Friday, March 5, 2010, 4:00 p.m., MST. The winner will be announced by Monday, March 29, 2010. See Waterfowl Contest (pdf) for an application and details.

To Purchase a Stamp

Colorado requires all waterfowl hunters to buy a Colorado hunting license (either a small game or a combination license) with a Colorado duck stamp verification, in addition to the federal duck stamp.  An actual stamp can be requested at the time the hunting license is purchased and will be mailed to the purchaser.

To Order a Collector's Stamp

To Order an Art Print of the Stamp

Art prints of the Colorado Waterfowl Stamp may be purchased by contacting Terrie DeLoria, Colorado Wildlife Heritage Foundation, at tdeloria@cwhf.info.
Posted by Chas S. Clifton at 9:00 AM No comments:

Email ThisBlogThis!Share to TwitterShare to FacebookShare to Pinterest
Labels: birds, Colorado, hunting, waterfowl
Older Posts Home
Subscribe to: Posts (Atom)
"The point was no longer to show one's hardihood. The point was to be there."