A Slap from the Colorado Legislature

Because Colorado's lawmakers in their wisdom are trying—and failing—to make Amazon.com collect state sales tax, Amazon has cut off all of its Colorado affiliates.

From my perspective, the legislators were willing to sacrifice individual "Amazon affiliates" who happen to live in Colorado (like me). In return, they get nothing except the satisfaction of making some kind of point that will be lost in the general political noise.

I never made big money as an Amazon affiliate. It was about enough to pay my Web-hosting and email account bills for the year. Who knows, I might have spent part of my commission in Colorado and paid Colorado state sales tax.

Email ThisBlogThis!Share to TwitterShare to FacebookShare to Pinterest
Labels: blogging

Here is Where Our Cheap Sneakers Come From

A photo essay on pollution in China.

Email ThisBlogThis!Share to TwitterShare to FacebookShare to Pinterest
Labels: China

Italian SAR is Piste Off

Search and Rescue (SAR) teams in the Italian Alps are increasingly unhappy with out-of-bounds skiers, reports the Times of London.

In a crackdown on “avalanche tourists”, Michela Vittoria Brambilla, the tourism minister, announced that she was drafting strict rules, similar to the Highway Code, to govern off-piste skiing.

February 26-28 I went winter camping for the first time in a very long time, skiing in to a site on the Arapho National Forest north of Silverthorne, Colorado.

Blogger Sawtooth has put together a slide show about it.

A Nature Walk on Mars

"Ready for a nature walk?" asked T__, the assistant fire chief, after we had donned our self-contained breathing apparatus (SCBA) and walked out of the Big Sister Department's building.

"On Mars," I answered. That's what it felt like, all bundled up with the sounds of inhalation and exhalation all Darth Vaderish inside my facepiece—like I was exploring an alien planet. 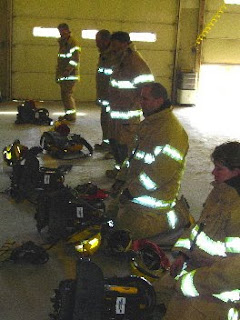 We walked around the building, down the alley, up along the irrigation ditch, back around to the front. Slowly, watching our breathing. "Yogic fire breathing" suggests something else, but in sense, that's what it was. We're not trying to raise kundalini, just trying to make the air in the tank last.

Right: Firefighters prepare to practice putting on breathing apparatus in less than one minute. I can't do it yet--hoses and straps get tangled ...

I grew up around wildland firefighting. I have done a little. I have my federal "red card" certification.

Now some of us in our little rural department are going through Firefighter I state-certification training.  It's the real deal. Today, for the first time, I wore SCBA (borrowed). I climbed ladders in bunker gear and practiced hauling stuff up to rooftops, such as pike poles, chainsaws, and other ladders. More weeks of training lie ahead.

Here is the irony:  I joined the local volunteer department 14 months ago after the county Search and Rescue (SAR) outfit told me that my services were not needed. That seemed an odd way to run a volunteer operation—there is always turnover. People move away or whatever. You need new blood all the time.

Now the local weekly runs an article on how SAR is looking for volunteers. Well, too late. I am committed to the fire service.

I think the fire departments are a little more blue-collar than our county's SAR. They are the people with mountain bikes and backgrounds in rock climbing and backpacking. You see more pickup trucks with lift kits at the fire department, meet more former military NCOs. But that's only a rough comparison—I would not push it too far.

I'm going up the ladder, and I'm thinking, "Two years ago I would have been grading essays on a Saturday in March."
Posted by Chas S. Clifton at 4:25 PM No comments:

Email ThisBlogThis!Share to TwitterShare to FacebookShare to Pinterest
Labels: fire

So, like, um, how do you do a "science fair" without science?

Once again, supporting the stereotypes about Boulder, Colorado ...

This is why at low points in my career I never thought of teaching in a public school. Based on my career as a student, I would have been kicked out for disrespecting authority figures.

The first thing I would have told them is that the colons in the list of rules are useless and ungrammatical.

Email ThisBlogThis!Share to TwitterShare to FacebookShare to Pinterest
Labels: childhood

Now We Are Six

Tuesday (when M. and I were in Colorado Springs) was Southern Rockies Nature Blog's sixth "blogiversary."

And in tribute to such longevity, here is the first post, which I did not write.

That's right. This started as a class blog for English 325, "Nature Writing in the West," a course that I designed at CSU-Pueblo. (I don't know if it survived my leaving.)

Consequently, many of the earlier postings are by students. And it was hard to get some of the student writers to hyperlink names, terms, etc. in their posts--or even put titles on them!

When the semester ended, I hated to see the blog die, so I kept posting. Later other nature-writing classes also participated.

Cooking (and Meat) Made Us Human?

From the BBC, scientific speculation on how a change in diet from raw to cooked foods may have speeded evolution:

Without cooking, an average person would have to eat around five kilos of raw food to get enough calories to survive.

The daily mountain of fruit and vegetables would mean a six-hour chewing marathon.

It is already accepted that the introduction of meat into our ancestors' diet caused their brains to grow and their intelligence to increase.

Meat - a more concentrated form of energy - not only meant bigger brains for our ancestors, but also an end to the need to devote nearly all their time to foraging to maintain energy levels.

It's a common observation that dogs have a moral sense.

Today I was reminded that they can tell lies as well.

I was out shoveling snow. Fisher, the Chesapeake, was quietly gnawing a bone. But Shelby, the ninja collie, kept trying to slink away down the driveway.

Just when I was about to give up on calling her back and put her behind the gate on the veranda, she spotting something off across the gully between our house and the neighbors.

She gave out an alarm bark and charged off across the gully. Fisher leaped to his feet and ran after, barking excitedly.

I suddenly suspected the worst. Calling them, I slogged through the deeper snow in the gully and up to the other side.

It had all been a ruse. There was no intruder on four feet or two. Fisher and I were both (momentarily) snookered. He turned and came back. She was gone, as fast as she could run.

A hour later she came trotting back up the drive, having made her rounds of the neighbors' places, just checking for free food or other excitement.

She has pulled that trick once or twice before. When will I learn?
Posted by Chas S. Clifton at 11:32 PM 1 comment:

On February 22, it became legal to carry concealed weapons in national parks and wildlife refuges according to the laws of the state in which they are located.

Most states require classroom instruction, a firing-range session, and a criminal background check in order to grant a concealed-carry permit. Vermont and Alaska do not require permits. Arizona permits "open" carry.

It's been a whole week, and mass carnage has not yet erupted.

Sitting her office, Betsy Marston, retired editor of High Country News, "views with alarm" the new regulations: "tourists around you might be packing an assault rifle."

Right. Frankly, I doubt that Mrs. Marston could define "assault rifle" if you handed her a pencil and piece of paper. And even using Wikipedia evidently is too much trouble.

Let's go back to that key word: concealed. It means, "you can't see it," and that fact pretty rules out rifles and shotguns.

But why let simple facts get in the way of editorial opinions?

National parks are not always safe places, and the dangerous predators usually walk on two legs. (I prefer pepper spray for the four-legged type.)

Meanwhile, on the East Coast, Sebastian of Snowflakes in Hell puts boots on the ground, looking for carnage in parks and monuments, but he finds none.

Blogging will cease for a few day while I take a trip. It should involve snow, skis, and tipis. Other people are in charge, so I get to ride along, try to be cheerful, and pull my weight (literally, as there is sledging involved).

No, that is not me in the photo. He is a competitor in one of the original primitive biathlons at Smugglers' Notch, Vermont.

We might be able to figure out some kind of biathlon too.

Right now the study floor is littered with gear, and Fisher, the young Chessie, has discovered the fleece sleeping-bag liner.
Posted by Chas S. Clifton at 4:05 PM 1 comment:

Not naming any names or making any direct comparisons, but here is one capital city that can probably handle a record snowfall.
Posted by Chas S. Clifton at 9:00 AM 2 comments:

• The solution to Australia's cane toad problem might be as simple as cans of cat food. (The Cane Toads documentary is still a classic.)

Once There Were Two Saloons

The local weekly's "100 Years Ago" column this week reprinted a news item about how "Under-sheriff Triplett made the trip" to our corner of the county in 1910, where he "ordered the two saloons there, running without a license, closed."

You haven't been able to walk up to the bar and order a drink here since the Great Poaching Scandal closed down the one café-and-bar at the junction back in 2004.

It seems the manager (the owner's son) and five of his buddies decided to poach a few trophy mule deer out of the pastures nearby in the early winter of 2003. They were caught and sentenced to hefty fines and suspended jail time.

The owner put a notice in every box at the post office, saying in effect, "It wasn't me, and it's not true we were serving any of the venison."

But people stopped eating and drinking there, and the café, which had been in operation under various owners at least since the 1950s, closed and stayed closed.

Now the county has bought the building and plans to tear it down and make a little roadside park "with picnic tables, a pavilion, and other improvements for area residents as well as for travelers."

Some of the fire department guys wanted to burn it down for practice, but there are problems with that, such as overhanging trees.

Maybe we can just chop holes in the roof for ventilation practice before the building is demolished.

And if you have an urge to drink in a bar, it is 15 miles to the nearest such establishment.
Posted by Chas S. Clifton at 10:18 AM 2 comments:

Still Not Exactly the Joads

vibe going in this story on nomadic retired volunteer parkies, but I don't think it works.

These people are not that desperate.

But if you like to travel, like outdoor-related work, and can stand dealing with the public, it's not a bad way to live.
Posted by Chas S. Clifton at 3:36 PM No comments:

Email ThisBlogThis!Share to TwitterShare to FacebookShare to Pinterest
Labels: parks, travel
Newer Posts Older Posts Home
Subscribe to: Posts (Atom)
"The point was no longer to show one's hardihood. The point was to be there."