Roseann Hanson comments on my previous post, "We haven't been members of the BINGOs (Big International NGOs) for years. Though we still get the mailings with the sandhill crane on them . . . which go right to the bin."

Driving to town this afternoon (hardware store--plumbing emergency), I was thinking that maybe my last post was too hard on the Sierra Clubs, etc. They do good work. But the one thing about them is that they don't "get" wildlife issues, unless said wildlife can be linked to a "landform" issue.

I had the same battles back when I occasionally wrote for High Country News in the late 1980s. Then-editor Betsy Marston loved Old West/New West stories, etc., but her eyes always seemed to glaze over when I proposed a wildlife story unless it involved the Endangered Species Act and politicians.

I'm thinking of one that I wanted to do on the wildlife refuge at Great Salt Lake--the areas described in Terry Tempest Williams' book Refuge--only a few years after the flooding that Williams writes about. By 1990, the high waters were receding and the birds were coming back. It was published, but in a fairly short version.

Another formative experience occurred in the 1980s when I was on the program committee of the Pike's Peak Group of the Sierra Club.

In my youthful naivete, I thought, "These people are outdoors a lot. We could educate them about poaching and how to spot and report poachers." So I arranged for a speaker from the Colorado Division of Wildlife.

BIg mistake. Blank looks from the audience. The DOW guy was just suffering at the podium.

I began to realize that for my fellow Sierra Clubbers, the mountains were scenic and uplifting and a great place for recreation, but they were not plugged into critters. They didn't know which person with a gun was a legitimate hunter and which was a poacher, and they didn't care to know, since the whole topic made them uncomfortable. (On a national level, the Sierra Club remains fairly neutral on hunting.)

M. contributes to the Natural Resources Defense Council, which does good work, but I saw something indicative in their latest "Nature's Voice" newsletter. It was an article about the "fight for Spirit Bear's rainforest home." What's really going on is a tussle with the provincial government in British Columbia over sustainable logging and old-growth protection. But it's headlined as being about the "Spirit Bear," an unusual white-colored black bear that supposedly lives only there. Talk about your "charismatic megafauna."

It's a land-use issue, and a legitimate one, but they drag in this unusual bear to put a face on that, not because they really have any relationship with bears.

Again, in NRDC's defense, I support their effort to protect whales and dolphins from powerful sonar blasts. When it comes to marine mammals, the hunters, alas, are not the conservationists in most situations.
Posted by Chas S. Clifton at 6:17 PM 1 comment:

They would be the guardians of traditional values, natural values. Nature, wildlife, the Earth, remember? Few people do these days.

The guardians of traditional values are hunters, fishermen and conservationists. They are the latest dying breed as America grinds itself up in the latter-day throes of its Manifest Destiny tantrum. We seem bent on erasing the last pagan wild place and improving it with asphalt, big-box stores, rows of human chicken coops, cul de sacs and drilling pads.

These "hook and bullet" groups seem to be getting more done these days than the traditional big enviro groups, although the latter continue to send M. and me plenty of fundraising appeals.

Or maybe our focus has shifted to state and even county-wide issues over the big "Save the ______" issues.

Disclaimer, or maybe a confession. Around 2000 I spent a term on the Colorado Wildlife Federation's board of directors. I don't know how effective I was, other than as a voice from outside the Denver metroplex. I learned something about nonprofit organization boards--that they have to clear the deadwood occasionally, and that the best board members either bring specialized skills (geologists, wildlife biologists, etc. for CWF) and/or fat checkbooks to the meeting room.

Lacking the precise skill-set needed and not having a family foundation at my disposal, I rated myself as "deadwood" and stepped down.
Posted by Chas S. Clifton at 4:06 PM 1 comment:

The "Buffalo Commons" is here

In the 1980s, studying the falling population of the High Plains and the depletion of the Ogallala aquifer, slowly being drained for irrigation, planner Frank Popper and Deborah Popper suggested turning much of the area in the "Buffalo Commons," a combination of national park and giant ranch featuring the land's biggest herbivore.

Something like that is happening in southeastern Montana. Financing comes from the American Prairie Foundation, a Bozeman, Montana-based land trust, and the World Wildlife Fund.

In addition, several Indian tribes have begun tribal cooperative bison ranches on the Northern Plains. Some federal land-management agencies are participating too.

When the Poppers first proposed their idea, they were met violent disagreement and even threats against their lives. They toured the Plains back in the 1980s, speaking in towns like McCook, Nebraska, with armed state troopers in the audience in case of trouble. Anne Matthews' book Where the Buffalo Roam describes that era.

But now, piece by piece, something somewhat like what they proposed is being assembled.
Posted by Chas S. Clifton at 8:26 AM No comments:

(Note that this story, blogged earlier, happened in Wales.)

Here is another story out of Wales, about a teacher whose pupils knew more than she did. It's the one under the headline "Unknown Knowns."

It helps if you realize that Leeds is an northern English industrial city, whereas north Wales has been sheep country since there were sheep. All the jokes that Coloradans tell about Wyoming ("Wyoming: Where men are men, and sheep are nervous") were probably told about north Wales in 4th-century P-Celtic dialects.
Posted by Chas S. Clifton at 7:31 PM No comments:

Ed Quillen, editor of Colorado Central magazine, asked me for 2,000 words of opinion on last summer's forest fire evacuation experience, so I wrote them. And here is the sidebar.

But after this fall's hurricanes, the earthquake in Kashmir, and other tribulations, all I can say is that we had it pretty easy, even though we feared losing our home.

The best part was getting to quote George Leonard Herter. Steve Bodio followed up with these observations.
Posted by Chas S. Clifton at 1:07 PM No comments:

A living-history show on the British Broadcasting Corp. had participants living like 17th-century farmers.

Sitting here in a cool house in a synthetic fleece sweater, I read this, one of several bits of wisdom that the time-travelers learned: 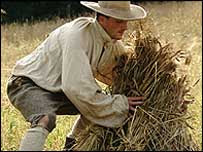 Dress for practicalities. Today fashion and social convention dictate our wardrobes. While polar fleeces and high-performance tramping boots may be all the rage when going rural, the wardrobe of 400 years ago proved more comfortable. "While the crew shivered in their modern garb, we never felt the cold in just two layers - a linen shirt and woollen doublet," says archaeologist Alex Langlands. Breeches meant no wet and muddy trouser legs, and staying covered up - rather than stripping off in the heat - prevented bites, stings, sunburn and scratches.
Posted by Chas S. Clifton at 1:02 PM 1 comment:

Bird flu and your bird feeder

The ornithology lab at Cornell University, one of the nation's leading places for research on wild birds, has this advisory about bird flu.

Summary: there is not much to be concerned about in terms of catching anything from wild birds. If it spreads into humans, than human-to-human transmission will be the problem.

It is unknown if the avian H5N1 virus can cause significant mortality in songbirds. If H5N1 does make it to North America and is spread in populations of wild birds, long-term surveys such as Project FeederWatch will help us assess the impact of the virus.
Posted by Chas S. Clifton at 10:02 AM No comments:

What were they thinking?

In what looks like a city park somewhere, a rabbit and two crows have a spat. (40-second video--fast connection necessary.)

"The Rabbit and the Crow" sounds like one of Aesop's fables, but if we are not going to anthropomorphize these animals, then what do you suppose provoked this encounter?

Forest fires of the future

An interesting interview with the author of a new book on the 1988 Yellowstone fires and how they changed our thinking, linked from The Uneasy Chair.
Posted by Chas S. Clifton at 3:30 PM No comments:

The Alpha Environmentalist, Jonathan Hanson's blog, has a new bloggier formart, and he himself has a plan: to bicycle around the Grand Canyon and write a book about the trip. First consideration: What model to ride?
Posted by Chas S. Clifton at 12:33 PM No comments:

Email ThisBlogThis!Share to TwitterShare to FacebookShare to Pinterest
Newer Posts Older Posts Home
Subscribe to: Posts (Atom)
"The point was no longer to show one's hardihood. The point was to be there."