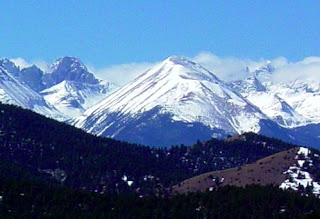 a. A beautiful, inspiring snow-covered mountain that lifts my spirit and makes me glad to live in Colorado.

b. A pretty decent snow pack for late March, but a couple more spring blizzards would be good. We could sure use the moisture.

Answer Key: If you answered (b), you are either a native or naturalized. If you answered (a), let's just say that you are not here for the long term.
Posted by Chas S. Clifton at 10:35 AM 2 comments:

This is a little off-topic but still fascinatng: A robot controlled by slime mold.

The Physarum polycephalum slime, which naturally shies away from light, controls the robot's movement so that it too keeps out of light and seeks out dark places in which to hide itself.

Earlier, there was the robot that generated power by catching flies.

I am waiting for the robot that digests tamarisk. I can see it, a twenty-foot high hexapod, slowly grazing along the Arkansas River somewhere downstream from Pueblo, gently raising its mechanical legs over the barbed-wire fences.
Posted by Chas S. Clifton at 3:11 PM No comments:

The rats in the walls are laughing


When tickled, rats can laugh, says researcher.
Posted by Chas S. Clifton at 10:53 AM No comments:

Email ThisBlogThis!Share to TwitterShare to FacebookShare to Pinterest
Labels: animals

First, no crop grown in the United States consumes and pollutes more water than corn. No method of agriculture uses more insecticides, more herbicides, more nitrogen fertilizer. Needed for the production of one gallon of ethanol are 1,700 gallons of water, mostly in the form of irrigation taken from streams either directly or by snatching the water table out from underneath them. And each gallon of ethanol produces 12 gallons of sewage-like effluent.

And then there is the question of whether we get a net gain or net loss in energy from ethanol. I'm still dubious.
Posted by Chas S. Clifton at 3:12 PM No comments:

Email ThisBlogThis!Share to TwitterShare to FacebookShare to Pinterest
Labels: energy

Irony and a long-handled round-point shovel

I should not have reminisced about clearing irrigation ditches in spring.

Walking the dogs last night, M. and noticed standing water where there is normally none. With a sinking feeling, I realized that it was near where a valve on the water line from the well to our next-door rental cabin is located.

This morning I dug down a couple of feet (through waterlogged Holderness silt loam, for those of you keeping track of soil series) to determine that, yes, the water was coming up from below. It was not from melting snow.

Then I called the "backhoe guy." Now there is a six-foot-deep muddy hole waiting for the "well guy" to put in a new valve. (I could do it, but it would take me three times as long, and I have to teach classes.)

And at the end of the day, I was trudging in high muddy boots back up my driveway, shovel on my shoulder.

Just like irrigation days.
Posted by Chas S. Clifton at 1:00 PM No comments:

¶Crotch rockets: A warm weekend brings out the crotch-rocket yuppies from Colorado Springs, looping down through the Wet Mountain Valley. (In Florence, by contrast, the Harley owners seem to drive up and down Main Street.) Every year a couple are killed on Hardscrabble Hill or the Bigelow Divide, sacrifices to two-wheel tourism.

¶The first meadowlark singing down on the prairie between here and Florence.

¶Northern flickers yammering and hammering on utility poles--they have been doing it for two weeks now.

Some crocus bulbs that I planted at least two years ago have bloomed, thanks to this winter's snows. And in the woods the spring beauty (Claytonia) are blossoming. (Photo)

¶So let's have a another spring blizzard. We need the moisture.

¶But the one that still affects me is the smell of burning grass. At once I think, "Ohmygod, I've got to clean the ditch."

But it has been fifteen years since I owned ditch shares in Canon City. That wandering lateral ditch along the bluff is no longer my concern. But something in my memory gets me looking around for a shovel and a propane torch come March and ditch-cleaning season.

Is this like post-traumatic stress syndrome for gardeners?
Posted by Chas S. Clifton at 5:43 PM No comments:

Coming back from last weekend's class trip to Vogel Canyon, we saw several versions of "this land is not for sale to the Army" homemade billboards.

Colorado's Congressional delegation has been hearing from them. Senator Wayne Allard has made some noises. Is he trying to slow the process--or just make it more palatable?

Some Colorado legislators want to limit the Army's ability to condemn land, although they know that the bill might not stand up in court.

A lot of wildlife and botanical research takes place there.

SE Colorado was wracked by this same issue in the late 1970s, when the Piñon Canyon Maneuver Site was created. In the 1990s, I went quail hunting there several times. You had to buy a special permit, but it was not much trouble.

Once my friend and I strolled into one of the former ranch houses--we could tell that the owners had just packed and left without tidying up at all. Perhaps they were some of the unwilling sellers whose land was taken by eminent domain. A 1978 Sears catalog still lay open on the kitchen counter. It spoke of pain.

Yet despite the Humvee tracks and the occasional bit of military debris, PCMS had lots of wildlife when I was there--maybe more than when it was grazing land. Windmills were maintained to pump water for wildlife. Certain sensitive areas were cordoned off and treated as "minefields." Like Fort Carson itself, PCMS was turning into something of a wildlife sanctuary. (Some hunting and fishing at Fort Carson is open to the general public.)

As a visitor, I was able to go places and explore things like the ruined stage stop that I probably could never have done before, unless I was the previous landowner's cousin or something.

On the other hand, expansion could restrict public access to areas in the Comanche National Grassland that are now open. And of course the ranchers who lease grazing rights there would lose them, further cutting into their economic base.
Posted by Chas S. Clifton at 4:05 PM 1 comment:

If you come from Colorado, people elsewhere assume that you are a skier, at the very least.

But most Colorado children never get into the mountains, says the Denver Post.

In the Denver Public Schools, the figure is 90-95 percent.

Unless parents make the effort--and obviously many cannot or will not--only organized clubs and programs can get kids off the asphalt.
Posted by Chas S. Clifton at 12:52 PM No comments:

Email ThisBlogThis!Share to TwitterShare to FacebookShare to Pinterest
Labels: childhood, Colorado
Newer Posts Older Posts Home
Subscribe to: Posts (Atom)
"The point was no longer to show one's hardihood. The point was to be there."