Some Facts and Figures on Bear Attacks

If I never hear again that joke whose punch line includes, "grizzly bear shit has bells in it," I will be a happier person thereby.

Alaska journalist Craig Medred offers some facts and figures on bear attacks — based on Alaska data, of course, but worth nothing anywhere.


“As of 2015, 75 instances of bear spray use were recorded (in Alaska) of which 70 (93.3 percent) were successful in altering bears’ aggressive behavior whereas five (6.7 percent) were not,” [Brigham Young University professor Tom] Smith and [noted Canadian bear researcher Stephen] Herrero write.

“However, of the 197 persons involved in those 75 encounters only four received slight injuries (2 percent) – all inflicted by grizzly bears.”

There is a significant likelihood, the scientists add, that the spray worked on a lot more bears than are in the study. Smith and Herrero says information on bear attacks, which involve people being injured by a bear, is limited, and information on incidents, in which people are involved in non-injury incidents, even more so.

“Unquestionably,” they write, “many incidents go unreported for a variety of reasons. It is believed that many human-bear interactions resolve peacefully, are not newsworthy, and therefore underreported. This (also) includes times when persons successfully dispatch a bear with a firearm.”

“None of these joggers or bicyclists [was] carrying a bear deterrent, and we believe that contributed to the outcome,” the study added.

Hikers and hunters remain far and away the largest category of people attacked by bears. Attacks on hunters have been going down, though, with attacks on hikers going up, probably representative of another lifestyle change.

And then there is the whole issue of dogs and bears, with which I have had a little experience. You should read the whole thing. 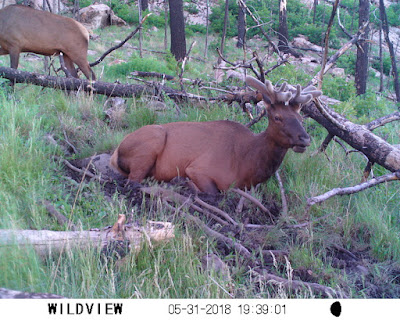 Some time when I hike to Camera Trap Spring — particularly during dry summers like this one — I take a trowel and try to dig out the spring a bit, making a little pool for the water to collect in.

And then this happens. Or a bear does the same thing. Fine, boys, enjoy your mud wallow.
Posted by Chas S. Clifton at 3:44 PM No comments:

A New Site for Ringtails 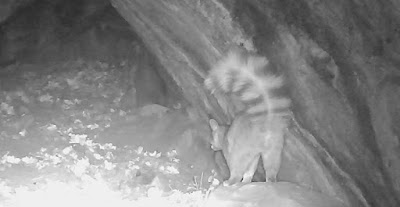 Some years ago my friend John S. was telling me about a backpacking trip he had made into the Beaver Creek State Wildlife Area in northeastern Fremont County in southern Colorado.

During the night, he said, a noise at his campsite awakened him. He flicked on his flashlight and found a "skinny raccoon" trying to get into his pack.

"That was a ring-tailed cat," I said, using the common nickname. (They are not really felines, and in fact they are related to raccoons.)

It was a case of being book-smart rather than speaking from experience. Truth is, I have never seen one one of these nocturnal "skinny raccoons" in the wild, despite all the nights that M. and I spent hiking around places like Beaver Creek SWA in the mid-1990s when we were censusing owls for the Bureau of Land Management.

They forage exclusively at night, feeding on mice, birds and insects. They are slim enough to hunt woodrats in their dens. Frequently they hunt in pairs and in autumn forage as family groups. Ringtails have efficient kidneys and may not need to drink, thriving instead on the moisture in their prey (Colorado Parks and Wildlife).

Gray foxes are nocturnal too, but I spot one now and again, most recently last week while walking the dog at 10 p.m. Not these guys. I did get some blurry images on a camera at one location, but it is not a location that I care to use anymore.

So the new summer project is to find them on our property, and I just succeeded this past week. Not much of an image, but now I know they are there and can try different camera sets.
Posted by Chas S. Clifton at 4:08 PM 2 comments:

They Came from the Sea, So Why Not Deep-Fry Them?


Apparently some people do that.
Posted by Chas S. Clifton at 4:07 PM 2 comments:

A Journey of 100 Miles Begins with a Single Dart

The four bears were getting big and bored, maybe with some tendencies toward bad. What had been hungry cubs in 2017 were now hefty sub-adult males, weighing around 160–170 pounds (~75 kg).

They had spent months at the wildlife rehabilitation center, eating, sleeping, climbing tree trunks, eating, wrestling sumo-style, eating, splashing in stock tanks — but now it was time to go!

Their human contact had been kept low — the rehab center is not a zoo — but now came more humans, two of them with CO2-powered dart guns. PPFFFTT!
The couple who run the center were there, of course, plus me as additional stretcher-bearer.

We lifted each tranquilized bear onto a stretcher, where it was weighed,  micro-chipped (as with pets),  ear-tagged (all this is wildlife-research data), and vaccinated against sarcoptic mange. Here is the one I called "Stumpy," the smallest at about 125 pounds, waiting to be loaded with his companion.

Then they were loaded into trailers (which are actually "live" bear traps themselves) for a long ride up into the Arkansas River headwaters, into areas where the drought is not so severe. At last came release, two in one place, two in another.

"No long goodbyes," says district wildlife manager Kim Woodruff, who made this last video. That these bears gallop away from humans is a good thing, for them. Now they have their chance.
Posted by Chas S. Clifton at 1:05 PM No comments:

• Colorado Life is not as wide-reaching a magazine as New Mexico, but they did get off the beaten Denver-ski towns-ghost towns path recently to do a piece on a small town in southern Colorado that has reinvented itself as "the antiques capital of Colorado."


Florence boomed in the 19th century, but it wasn’t one of Colorado’s innumerable gold- and silver-mining boom­ towns – black gold was the specialty here. Florence had the first oil well drilled west of the Mississippi River, and the local oilfield was just the second in the nation to be commercially developed. Alexander M. Cassidy, who kicked off Florence’s oil industry in 1862, went on to found a company that evolved into Conoco.

• As long as we are on the antiques-and-nostalgia kick, there is a small enterprise in the gold-mining town of Victor making tin cans with 19th-century labels. Collectors and filmmakers know where to find them.


A couple of summers ago, she got a call requesting cans for the second season of AMC's "The Son," featuring Pierce Brosnan and taking place in the old West. Proper props were needed for a target practice scene, Karen was told.

"I didn't tell the cans they were gonna be shot," she says, regretfully.

• Today's junk, tomorrow's antiques: "Gear That Doesn't Work," from Outside magazine. Hang on to that titanium spork; it might be worth something some day.
Posted by Chas S. Clifton at 8:00 AM No comments:

The current Southwestern drought does not stop at the border but extends into northwestern Mexico. Sitting here with a mid-day temperature of 98° F., humidity of 8 percent, and only a tenth of an inch of rain, if that, for the week, I was wondering When will it end?

So I went looking online for 2018 Southwestern monsoon forecasts and found one from The Weather Network. Pretty informative — but also geographically "challenged."

I scrolled down through the charts and graphs and found this video: "Must See: Time Lapse of the Monsoon Season in Mexico."  Late summer rains do start first in Mexico and then move northward. And ponderosa pine trees do grow in the Mexican Sierra Madre.

But wait — that logo says "Angel Fire Resort," which is in northern New Mexico, admitted to the Union in 1912.

And who will appreciate that error more (I hope) than the editors of New Mexico Magazine, which for decades has run an item in every issue titled "One of Our 50 Is Missing" (archived here).

Even today, traveling in the USA and elsewhere, New Mexico residents are complimented on how well they speak English, while postal clerks in other US states tell people that they must fill out a customs form to send a package to Las Cruces. And so on.

Should we cut TWN some slack because they are headquartered in Ontario?
Posted by Chas S. Clifton at 2:20 PM 1 comment:

A Sudden Little Fire and a View from the SEAT


Single-engine air tanker drops retardant at the Horse Park Fire
in southwestern Colorado on May 28, 2018.

I was just about to make the turn to the post office at 9 a.m. on Saturday, June 2, when my cell phone rang, and suddenly I was a volunteer fireman again.

A little blaze had popped up a few miles from town, possibly caused by lighting three days previously, but so far no one is saying so officially.

We got one brush truck with three volunteers as close to it as we could by driving through pasture land — the fire was nearby on national forest. A colleague and I were just tightening our bootlaces preparatory to walking up there and scouting it when the Forest Service arrived — in force.

There were command vehicles, wildland fire engines — and here came a line of crew buggies, which turned out to be the Twin Peaks Initial Attack crew, normally based in Utah. They formed up and started marching up the slope.


We looked at each other and said, "Well, it's their fire now." Our second brush truck was on-scene by then. We got a new mission, to visit all the homes nearby that had been put on pre-evacuation notice, look for potential problem areas, chat with the homeowners, eat cookies . . . and watch the air show.

The bigger tankers can do the most, but it felt good to see the SEATs come in early.  The video above, found on the Fire Aviation blog, gives you a view from the pilot's seat.

Everyone is on edge about the drought, but the fast and heavy response stopped this little quickly.  Bullet, dodged. By five o'clock, some of the nearby residents who had decided to evacuate were coming home again.
Posted by Chas S. Clifton at 5:22 PM No comments:

Email ThisBlogThis!Share to TwitterShare to FacebookShare to Pinterest
Labels: Colorado, fire, Forest Service, summer, Wet Mtns.
Newer Posts Older Posts Home
Subscribe to: Posts (Atom)
"The point was no longer to show one's hardihood. The point was to be there."