Andre Norton Messed with my Mind

Recent Web-surfing (Do people still say that?) led me this fascinating article on Gizmodo: "A Mysterious Mammoth Carcass Could Change Human History."

The problem was that I read as far as this line — "A rounded hole through the interior jugal" —and immediately I think, "A bullet hole! Time travelers!" (And as a second thought, "What caliber for mammoth?")

Whose fault is that? Andre Norton's — pen name of Mary Alice Norton (1912–2005), who published in days when female SF writers pretty much had publish under male names for a nearly all-male readership.


At the end of the Twentieth Century petty crook Ross Murdock is given the choice of facing a new medical procedure called Rehabilitation or volunteering to join a secret government project.

Hoping for a chance to escape, Ross volunteers to join Operation Retrograde and is taken by Major John Kelgarries to a base built under the ice near the North Pole. Teamed with archaeologist Gordon Ashe, he is trained to mimic a trader of the Beaker culture of Bronze-Age Europe.

(The Time Traders and one of its sequels, Key Out of Time, are available as free e-book downloads from Project Gutenberg.)

When I read it, after finding it in my tiny branch county library in Lakewood, Colo., I was maybe 11. It was not a good time— my parents had separated — Dad had moved out —and my mother was seeing some counselor whose office was in the same strip mall, so she would park me at the library. Then he moved back in — I was so glad —and then he moved out again. So maybe that was actually a good time for time travelers and for thinking about that evocative phrase, "the Beaker People."

Meanwhile, about that mammoth.


This 45,000 year-old mammoth’s life ended violently at the hands of hunters. That wouldn’t be surprising—it’s well known that Pleistocene humans were expert mammoth killers—but for the location. It was excavated from a permafrost embankment at Yenisei bay, a remote spot in central Siberia where a massive river empties into the Arctic Ocean.

That makes this brutalized mammoth the oldest evidence for human expansion into the high Arctic by a wide margin. Its discovery, published today in Science, might push back the timeline for when humans entered the northernmost reaches of the world—including the first entries into North America.

Reading about it is still a form of time travel, but I want to go to the Bronze Age via a secret base in the Arctic, damnit.
Posted by Chas S. Clifton at 5:12 PM 1 comment:


Famed cattleman Charles Goodnight is usually associated with the Texas Panhandle region, but he had a ranch in the 1870s that stretched southwest from Pueblo into the Wet Mountains. A feature of this ranch was a sandstone barn built in 1870. Goodnight dreamed big, but he never would have dreamt that his barn would have its own Facebook page.


Charles Goodnight was born in 1836 in Illinois and when he was 10 years of age his family moved to the newly formed State of Texas. Here learned about cattle herding and began his life-long love affair with Texas Longhorns. He and Oliver Loving began trailing Longhorns north to Colorado and Wyoming in the 1860s. Goodnight invented the chuck wagon in order to more easily feed the drovers on the trail.

In 1868, Goodnight put down roots just west of the newly created town of Pueblo, Colorado. He built his Rock Canyon Ranch below the bluffs of the area just west of what is named Goodnight Street. He ran his cattle all over the Gervacio Nolan Grant and had line camps over the area, including Babcock’s Hole Ranch in Wetmore, Colorado. The ranch remains today as a testament to Goodnight’s western heritage.

Goodnight and his wife lived several years in Pueblo before he transferred his headquarters to Palo Duro Canyon south of Amarillo. The barn lies between the Arkansas River and Thatcher Boulevard/Colorado 96 on the city's west edge. Formerly it was surrounded by the buildings and machinery of a gravel operation mining the alluvial deposits. Now all that is gone.

In a classic bureaucratic snafu, there is a sign by the barn about its history, but you cannot
(legally) enter the property, even it is (I think) state-owned now. Bring your big telescope.


The City and County are set to approve $5,000 each toward the cost of Construction Documents and Specifications. The total for the documents is $37,500.00! Frontier Pathways and HPI are funding $1,000 each toward this amount. The Committee is giving $26,540.00 which we raised already! . . . . In April we will be writing a State Historic Fund Grant for $200,000 to begin the exterior work on the barn next Autumn. Our grant writer is also submitting grants to go toward the cash match and more. We are looking forward to a HUGE 2016!

Assorted factoids about Charles Goodnight from Wikipedia and elsewhere.

• Young Charlie was too busy being a cowboy and then a Texas Ranger to be bothered much with schooling, never learning to read and write. About the time the barn was going up, he married Mary Ann "Molly" Dyer, a Texas schoolteacher, who handled all written matters for him. She died in 1926.

• He smoked numerous cigars every day.

• He is credited as the (very loose) inspiration for the character of Woodrow F. Call in Larry McMurtry's novel Lonesome Dove (1985) yet also appears himself as a minor character.

• At the age of 91, after Molly's death, he married a woman of 26. She got pregnant, but miscarried. (He and Molly had no children either.) He died two years later at the age of 93.
Posted by Chas S. Clifton at 5:00 AM No comments:

When I posted those snowpack numbers, I knew that for the Arkansas River drainage, where I live, the better-than-average figure represented snowfall along the Continental Divide. At my foothills location, the ground is mostly dry, and the High Plains mostly likewise.

But this latest NASA report suggests that we may yet get the big snow. Maybe it will be "three feet of glop," as sometimes happens in the spring.

Let's Start 2016 with a Look at the Snowpack 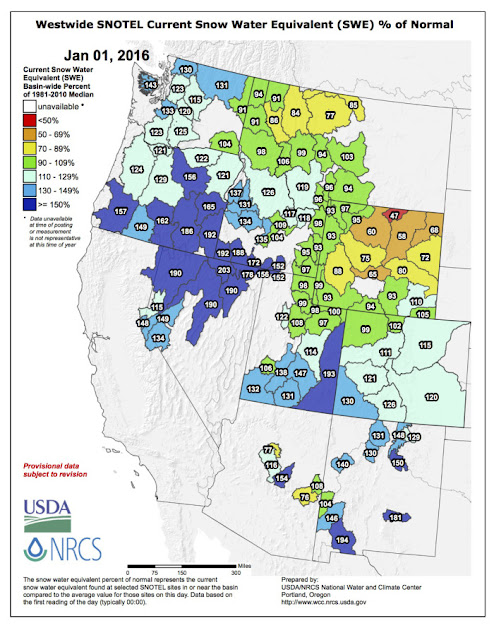 Lots more information at the National Weather and Climate Center.
Posted by Chas S. Clifton at 9:35 AM No comments:

Email ThisBlogThis!Share to TwitterShare to FacebookShare to Pinterest
Labels: snow, water, weather, winter
Newer Posts Older Posts Home
Subscribe to: Posts (Atom)
"The point was no longer to show one's hardihood. The point was to be there."