The day started clear, and I heard flickers, robins, and blackbirds singing when I left home to travel to the university.

Around 3 p.m., a snowstorm swept through. A north wind blew big, wet snowflakes horizontally across Pueblo's Baculite Mesa and through the university buildings, while thunder boomed.

Email ThisBlogThis!Share to TwitterShare to FacebookShare to Pinterest
Labels: weather

A walk in the Mason Gulch Burn 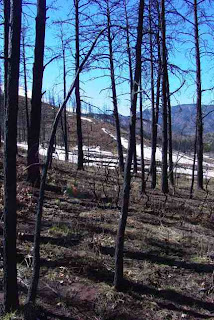 I took this photo yesterday along the north edge of the Mason Gulch Burn, which burned in July 2005 and which covers at least 11,000 acres between the communities of Wetmore and Beulah, Colorado.

Heavy rains in July 2006 tore through the burned area. What had been a tiny trickle of a stream in Mason Gulch is now, in places, a wider, flat, graveled trench several yards across.

Between the localized flash flooding and the loss of trees, walking a trail that I had not taken since before the fire is a disconcerting experience. It's like seeing someone you know who has shaved their head--the contours are the same but the visual experience certainly is different.

The burned area calls me, though. I look up at little ridges that used to be hidden from sight, wondering what lies behind, seeing routes that could be hiked once the snow and mud dry.

This spring and summer I hope to make more of a photographic survey of at least this end of the burned-over area.
Posted by Chas S. Clifton at 3:59 PM No comments:

In his latest column for Colorado Central, also available through High Country News, my neighbor Hal Walter faces winter claustrophobia, growing older with snow shovel in hand, and a friend's falling sick during a snowstorm.

This winter’s series of snowstorms has sent me shoveling day after day, and for some reason now that I am 47, this doesn’t seem as much fun as it did when I first moved to the mountains. While my neighbors gear up with snow-blowers, truck-mounted snow blades and tractors, small and large, I shovel away, wondering how much of this stuff has to fall to stockpile enough water for summer.

When not snowed in, Hal is a serious competitor in the Colorado niche sport of pack-burro racing and also writes about it.
Posted by Chas S. Clifton at 3:43 PM No comments:

The end of an era in serious boots 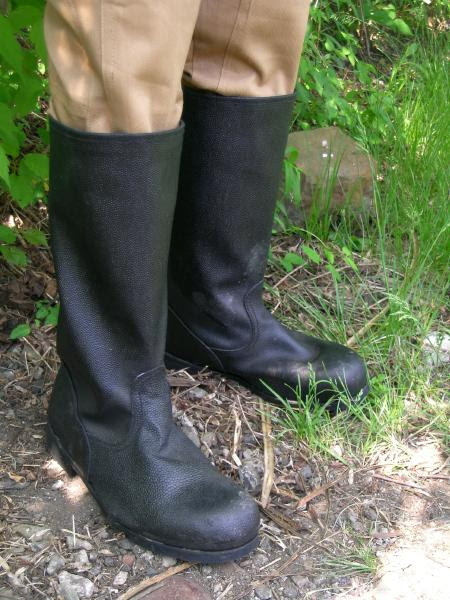 Southern Colorado is thawing out a little bit this week. My rubber snow boots, caked in mud, sit drying on the front porch. Fifteen inches tall, they are still not tall enough for some of the lingering snow drifts.

M. swears by her Sorels with the felt inner liners and rubber/nylon outer layer. I go for laced shoepacs with removable liners when I have to walk a long distance; gumboots with thick socks when I don't.

But none of that compares with the World War II German and Russian infantry who marched in pull-on boots and no socks. Instead, they wrapped their feet in pieces of cloth (an art in itself) that could be rearranged when holes wore through, thus outlasting any pair of socks. Today's Russian army, however, appears ready to drop that system. (See photo.)

Advocates of the tradition say cheap and virtually indestructible boots and foot bindings suit the cold Russian climate better than the refined footwear of Western armies. And in the marshland, there is almost no danger of water making its way inside.

On a related note, this story from a January 1945 issue of the military newspaper Stars and Stripes describes how American soldiers adapted to winter weather.
Posted by Chas S. Clifton at 9:56 AM No comments:

Back to the Stone Age! (Beginners welcome)

The Cottonwood Institute in Crestone, Colorado, offers a "Back to the Stone Age" week-long camp for high-school students.

We will experience first hand how we used to live, thrive, and survive in the natural world by learning and practicing stone age survival skills. We will focus on shelter, fire, cordage, and stone tools. We will discuss the environmental impact of these skills, look at the waste we produce, and contrast that to the way we live today.

The philosopher Paul Shepard, writing in his book The Tender Carnivore and the Sacred Game, suggested that all teenagers should have at least a one-time experience of hunting large game with primitive weapons. He regarded the experience as part of human maturation and development--much of his critique of our culture revolved around Americans being stuck in adolescence.

So is this "Stone Age" camp at least a start?

Quite a few nature writers and others say that Paul Shepard changed their lives.

Its plot is based on recent history on the Tibetan Plateau, where a rag-tag group of volunteer game wardens attempted to stop poachers killing Tibetan antelope for their fur, which is woven into soft, luxurious cloth: shahtoosh.

It was made in 2004 by National Geographic Films, who have been criticized for soft-pedaling the Chinese takeover of Tibet. On the other hand, without Chinese government cooperation, Mountain Patrol could never have been filmed on location.

A warning: The film's first five minutes are pretty brutal. M. walked out. But after that the story takes over.
Posted by Chas S. Clifton at 5:47 PM 2 comments:

What is the 'wrong type of snow'?

We step outside our usual Colorado/New Mexico milieu for this one.

Heavy snow (6 inches/15 cm--don't snicker) has fallen in Britain, and people are asking questions about it. The First Post online newspaper has the answers.

Here is the British take on "champagne powder:"

What's the "wrong type of snow"?

Made famous by British Rail back in February 1991, this is powdery snow that gets sucked into engines or trapped in points and electrical gear on tracks, causing short-circuits.
Posted by Chas S. Clifton at 3:54 PM 2 comments:

Email ThisBlogThis!Share to TwitterShare to FacebookShare to Pinterest
Labels: winter

A new birthplace for skiing?

My readers who are familiar with Central Asia (the both of youse) may enjoy this news.

Stranded in the customer lounge of the Jeep dealership last Friday while M's TJ was undergoing a facial, Swedish massage, and mud bath (Jeeps love mud baths), I read an interesting item in one of last year's issues of Skiing magazine.

The oldest archaeological evidence for skiing comes not from Scandinavia but from the Altai Mountains, where China, Mongolia, Russia, and Kazakhstan meet.

Stone Age cliff paintings found in the Altai range in northwest China that date back to about 8000 B.C. are the latest proof that skiing got its start in central Asia. And even though the paintings, which depict hunters using primitive skis, are 10,000 years old, not much has changed in the Altais: Nestled in valleys ringed by 14,000-foot peaks, a handful of tribes are still using what looks to be the same ancient skiing technology.

The indigenous, nomadic Altai people have had minimal contact with their ethnic-Chinese neighbors until very recently, and even less exposure to the West (thus no P-tex or dorky Austrian graphics). In turn, they have maintained traditional lifestyles, living in log houses and yurts, tending livestock—and slapping on eight-foot-long, five-inch-wide wooden boards when the snow flies.

Since I doubt that there was a Mongolia-Finland trade route, I suspect that Scandinavian skiing, which goes back at least four millennia and maybe more, was an independent invention.

In Colorado, however, we assume that skiing was invented by the 10th Mountain Division.
Posted by Chas S. Clifton at 5:19 PM 4 comments:

'A Nation of Wimps'

There must be joy in Norfolk: Adria Hinkle and Andrew Cook were found to be guilty only of littering when they dropped dog and cat carcasses in supermarket dumpsters.

We can expect PETA to spin this as another victory over the forces of ignorance.

As Dave Hardy said, they should have been charged with fraud, if it is fraud to tell an animal shelter that you are adopting an animal, when you really plan to kill at it as soon as it is in your Death Van. But the charge of "obtaining property by false pretenses" did not stick.

The van itself was confiscated. Whoopeedoo.

More trial coverage from the anti-PETA folks.
Posted by Chas S. Clifton at 8:30 AM No comments:

I drove home this evening in a white and grey landscape on Colorado 96. For part of the trip, there were no cars ahead of me and no cars in the rear-view mirror, but better that than idiots on either side of me, convinced that all-wheel drive makes them invincible.

But I digress. The real topic of this post is an article in today's Denver Post: Killer Beetles Juiced Up to Beat the Cold.

Researchers say for a significant beetle die-off, low temperatures must hit 35 below to 40 degrees below zero for several consecutive days.

And while it has been cold - and is going to get frigid again as an Arctic front is forecast to bring temperatures as low as 30 below to the mountains this weekend - it just isn't cold enough to cause a massive beetle die-off.

This summer M. and I watched a big ponderosa pine's needles turn yellow near our house. Others have died nearby. Only a miraculous wind shift kept the July 2005 Mason Gulch Fire from moving into one stand of dead trees.

We hope that the thinning we have done will help slow the beetles' progress, but they are definitely here.

There is more than one type of beetle at work--the article does not really differentiate.
Posted by Chas S. Clifton at 5:58 PM No comments:

From the Better Late Than Never Dept.: The Goat reports that Ed Abbey's classic piece of enviro-fiction is finally being prepared for the silver screen.

A longer story ran in the Deseret News in Salt Lake City.

The real question will be whether [director Catherine] Hardwicke can resist the temptation to soften Abbey’s eccentric but steel-cored characters into mere lovable buffoons, and whether she’ll submerge his pro-environment/anti-development message in a bland sugar coating of comedy

(She also directed The Nativity Story.)
Posted by Chas S. Clifton at 3:47 PM No comments:

They are watching the PETA "We Kill Dogs Better" trial, of course.

In day eight of the trial, PETA euthanasia boss Daphna Nachminovitch admitted that PETA "owns" animals (for a short time). Funny, I thought that they did not believe in anyone owning animals for any purpose whatsoever.

You will have scroll way down the page. Look for this passage:

The only thing stranger than Nachminovitch's legal hedging throughout this discussion was the odd sound of a PETA employee referring to people as the "owners" of dogs and cats. We'd never experienced that before—it's usually "guardians" and "companion animals."

But when it's convenient, PETA will apparently assert ownership over the animals it has otherwise sworn to "liberate."
Posted by Chas S. Clifton at 3:39 PM 2 comments:

Email ThisBlogThis!Share to TwitterShare to FacebookShare to Pinterest
Labels: dogs, PETA
Newer Posts Older Posts Home
Subscribe to: Posts (Atom)
"The point was no longer to show one's hardihood. The point was to be there."