"The Big Burn" Coming to PBS

Based on Timothy Egan's excellent book The Big Burn, an upcoming episode of PBS' The American Experience,  "The Fire That Changed Everything," is devoted to the largest forest fire complex in the history of the United States, which rampaged through northern Idaho and western Montana in 1910.


In the summer of 1910, hundreds of wildfires raged across the Northern Rockies. By the time it was all over, more than three million acres had burned and at least 78 firefighters were dead. It was the largest fire in American history, and it assured the future of the still-new United States Forest Service.

Rocky Mountain PBS has it scheduled at 8 p.m. on February 3.

I have already seen commenters on a wildfire-related site say, hey, that man is using a pulaski too, which postdates the fire and assistant ranger Ed Pulaski's heroic actions. Well, yes, I don't think there was any movie footage in 1910, so the filmmakers probably substituted footage from the 1920s–1940s (the pre-hard hat days).

Bill Gabbert here offers some "behind the scenes" images, including the firefighters trapped in the Pulaski Tunnel, a/k/a the War Eagle Mine.
Posted by Chas S. Clifton at 11:39 AM No comments:

Why You Don't Want a 'Water Feature' in Bear Country 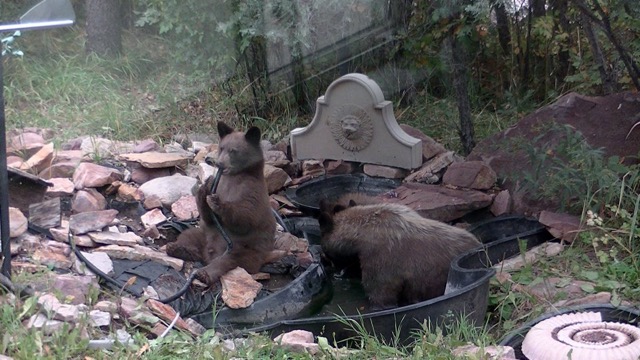 The attribution for this photo was stripped off in the process that brought it to me, but I understand that it was taken in Beulah, Colorado (western Pueblo Country), located in the foothills of the Wet Mountains, which have a healthy population of black bears.

Bears will walk along a shallow stream flipping over rocks to see if anything edible is underneath — these two probably found nothing in the artificial pond and stream, but being bears, they had fun anyway.
Posted by Chas S. Clifton at 11:55 AM 1 comment:

Would You Have Eaten What George Melville Ate?

In July 1879, the USS Jeannette, a former Royal Navy gunboat with both sails and a steam engine, left San Francisco Bay for the Bering Strait and the Arctic Ocean beyond.

Its purchase and outfitting expenses were chiefly covered by newspaper tycoon James Gordon Bennett, Jr.,  sort of the Ted Turner of his day, with the ship being commissioned by the US Navy and given a Navy crew—plus two native Alaskan dog handlers and a veteran whaling captain to serve as "ice pilot."

For two winters Jeannette explored northeast of Siberia, looking for a hypothesized open water projected — by eminent geographers— to exist north of the band of pack ice. For most of the time, of course, the ship was stuck in the pack ice, carried along by the polar drift while the crew carried out scientific observations and visited some hither-to unknown islands.

In June 1881 Jeannette was released by the ice—but then re-caught by moving floes. Despite the hull reinforcements added in preparation for the voyage, this time the ship was crushed. The crew had warning and had evacuated many supplies, sleds, dogs, and three of the ship's boats.

And then the hard part started. The story of Jeannette, the sinking, the horrible sled journey south, south, south, and the open-boat voyage toward the Siberian cost are told in Hampton Sides' book In the Kingdom of Ice, and if you like stories of adventure and endurance, you will devour it like a starving sailor eats raw fish.

But there is more. When the story shifts to the struggles of the castaway sailors and the search for the missing, Sides relies quite a bit  on In the Lena Delta (1884), an account written by the senior surviving officer, George Melville, the ship's engineer. So I had to get it.

Only two months after being rescued by some native Siberian Yakuts and still suffering from frostbite and malnutrition, Melville organized a November dogsled expedition to look for more survivors beyond those already found. (He did receive significant assistance from Russian imperial officials, once they learned of the castaways' existence.)

At one point, in the middle of howling winter gales, Melville and his Yakut guides (who always lived on the ragged edge of starvation anyway) ran out of food and were reduced to eating bits of leftover frozen reindeer and bones that the Yakuts cached here and there on their trapping routes. He writes,


With an axe the rib pieces were soon severed from the back-bone, and then from the inside of these the natives cut strips with their sheath-knives and handed me a chunky moral from the loin, as breakfast. I bit into it without any ceremony, while the dogs clamored frantically for a share. So long as it remained frozen the meat did not exhibit the vile extent of its putridity; but directly I had taken it into my mouth it melted like butter, and at the same time gave off such a disgusting odor that I hastily relinquished my hold upon it, and the dogs captured it at a single gulp. The natives first stared in genuine astonishment to see me cast away such good food to the dogs, and then burst forth into hearty laughter at my squeamishness. But I was not to be outdone, much less ridiculed, by a Yakut, and so ordered some more, perhaps a pound of the stuff, cut up into little bits. These I swallowed like so many pills, and then gazed on my Yakut friends in triumph; but not long, for in a little while my stomach heated the decomposed mess, an intolerable gas arose and retched me, and again I abandoned my breakfast — my loss, however, becoming the dogs' gain.

At this the natives were nearly overcome with mirth; but I astonished them by my persistence, requesting a third dose, albeit the second one had teemed with maggots; and swallowing the sickening bits as before, my stomach retained them out of pure exhaustion.

Remember this the next time you notice that the package of meat in your refrigerator is past its expiration date.

And In the Kingdom of Ice is a great cold-weather read. Unless you are in Yakutsk (a locale that figures in the story), it will make your winter seem like balmy spring.
Posted by Chas S. Clifton at 6:45 PM No comments: 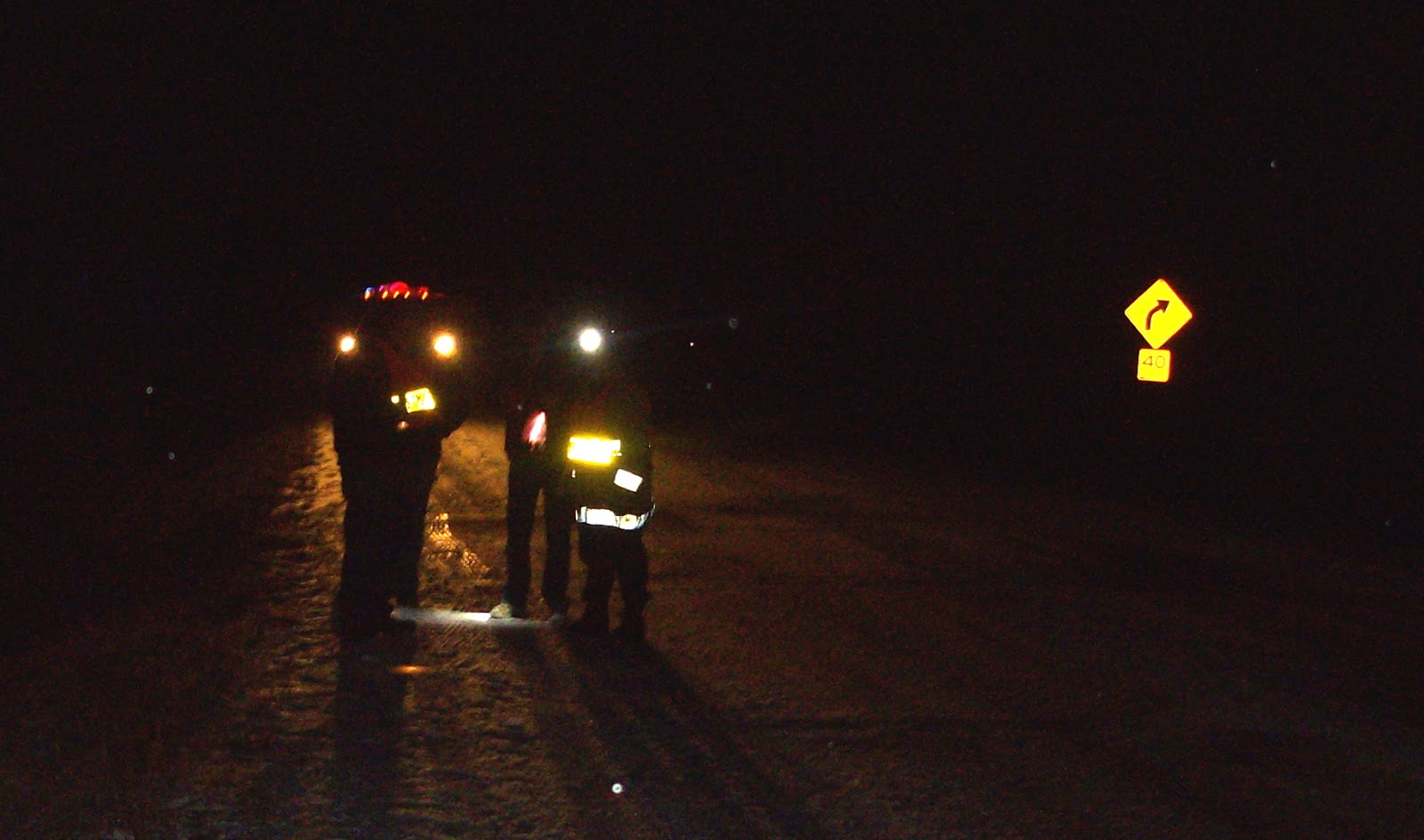 1. You see a neighbor at a cafe during lunch in Nearby Town, 15 miles away. Eight hours later, you meet her at the site of a one-pickup truck rollover accident on a snowy highway near home. She was wearing her EMT gear at lunch—must have been her shift on Nearby Town's ambulance.

2. Responding to the call in your POV (personally owned vehicle), yours are the only tire tracks on the snowy county road. In the headlights' beams, the track of a fox weaves back and forth across the road. Red flashes bounce off the pine trees — now they are echoed by other flashed on the highway.

3. On the scene: the sheriff's deputy, a state snowplow driver, and the volunteer firefighter who just walked over because it happened in front of his little ranch. The ambulance goes to the home where the truck's occupants, not seriously injured, had gone, following the lights. "Someone was pounding on my door," the firefighter says, "but by the time I got there, they were gone." They went up the canyon and across the road — probably highly agitated. 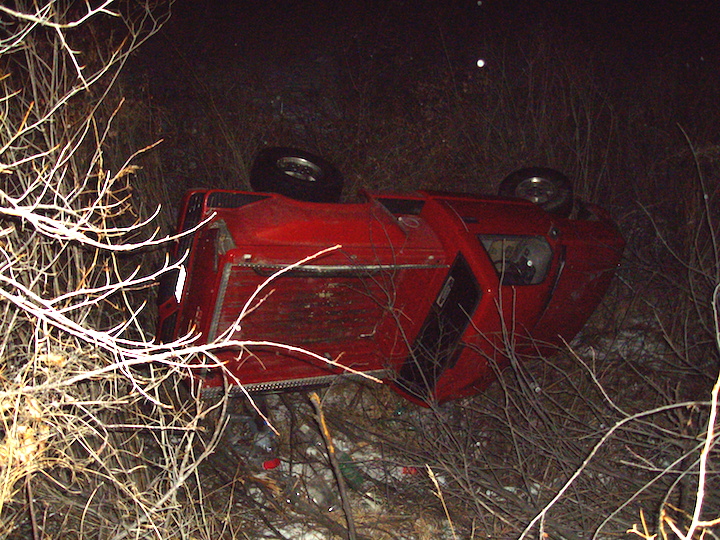 4. Another volunteer arrives. You and he climb down the slope to where the red Chevy lies pillowed on crushed willows — maybe they cushioned it, preventing serious body damage. Passenger-side window broken out (crash or evacuation?), windshield badly cracked, but no leaking gasoline, no smoke, no crackling or hissing sounds. No blood either, that's good.

5. Your engine arrives with three on board. The deputy is relaxed. The Colorado State Patrol is  not coming, he says. No wrecker coming tonight either. So there is no need to direct traffic. You say hello to the chief of the Nearby Town VFD, who followed the ambulance out to the scene (adrenaline junkie that he is). Say hello to the neighbor. Tell the deputy we're clearing the scene. Tell "Central" we're clearing the scene.

6. You all go your separate ways. The chief will do the incident report. You drive back down the quiet road to your house, cutting the fox tracks once again.
Posted by Chas S. Clifton at 12:30 AM 2 comments:

Yes, It's Pretty, But We're Sick of It 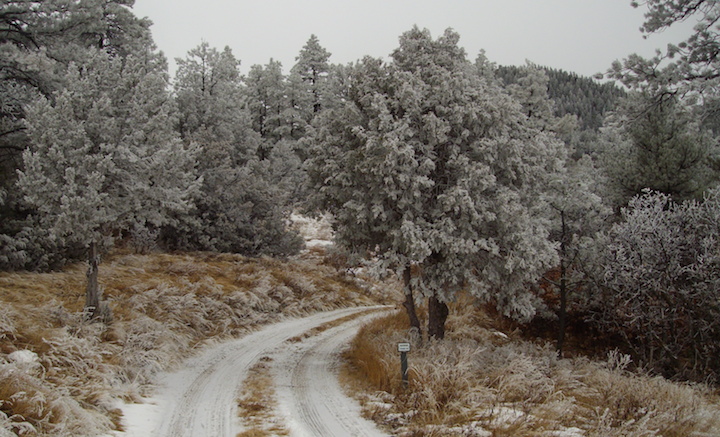 Four days of freezing fog in the last week. M.  is complaining loudly that it's too icy for her daily walks. Sometimes, even gravel and bare dirt are slick. This is completely un-Southern Colorado, and we do not like it.
Posted by Chas S. Clifton at 4:04 PM No comments:

Based on SNOTEL sites. Archive here. A variation on the map that I posted last week.
Posted by Chas S. Clifton at 10:25 AM No comments:

Six Views on Getting in Firewood

Early January 2015 Snowpack in the West 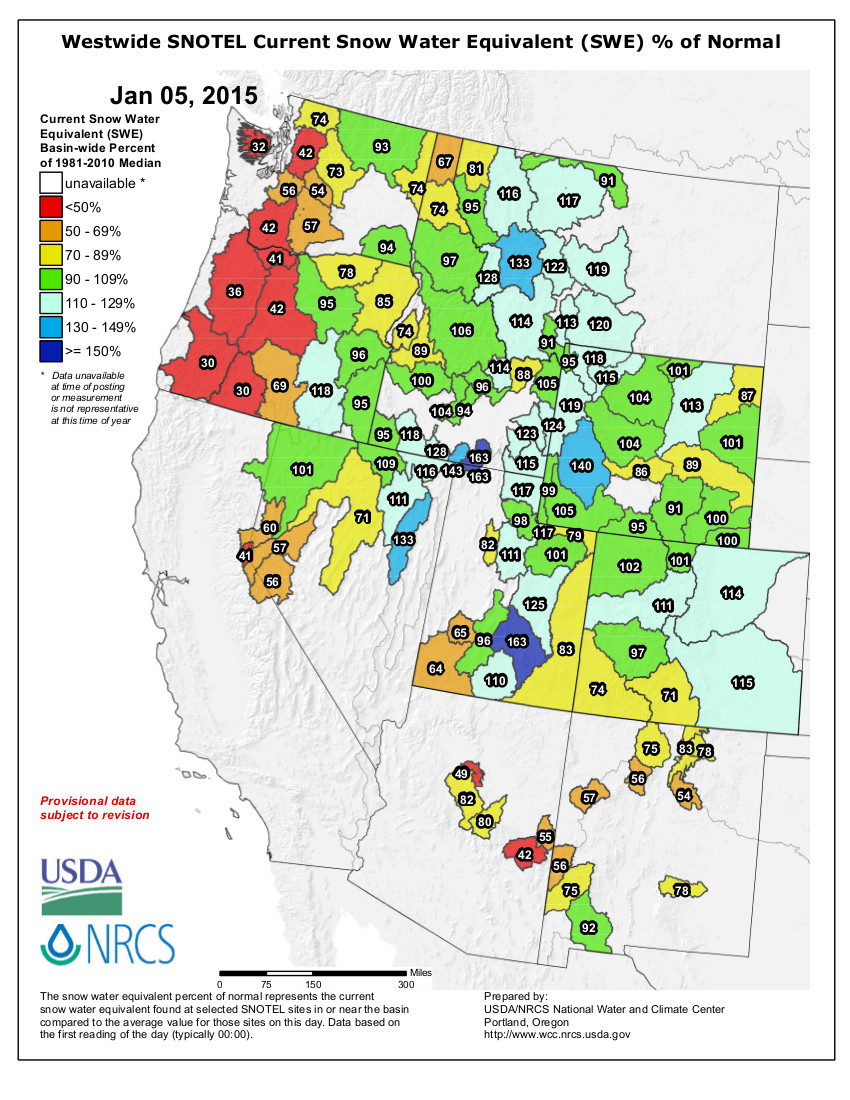 • Mysterious Kansas: Who built the stone caves and why? "Parish was wowed by the workmanship and created a panoramic image of it. Then he began to wonder: How many more of these are out there?"

• Datura — still legal in New Mexico (and everywhere else). Maybe there is a connection with ancient rock art: "Hallucinogenic plants were found growing beneath the triangle designs, including a particularly potent species of wild tobacco and the potentially deadly psychedelic known as datura."

• Maybe you have read that forest fires are bigger and hotter than in the past. Not if you take the long view, says a University of Colorado study.  "Wildfires along Colorado's Front Range, long assumed to be intensifying, may not be when understood in historical context before 20th-century firefighting, a new study finds."
Posted by Chas S. Clifton at 8:44 PM No comments:

Can I get a full A-cup sized handful of the ground beef?

And other SWPL-ish remarks and conversations allegedly overheard in Boulder, Colorado.
Posted by Chas S. Clifton at 3:59 PM 1 comment:

Email ThisBlogThis!Share to TwitterShare to FacebookShare to Pinterest
Labels: Boulder, Colorado, culture, humor
Newer Posts Older Posts Home
Subscribe to: Posts (Atom)
"The point was no longer to show one's hardihood. The point was to be there."