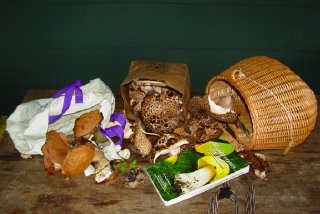 With thunder in the distance, M. and I took a walk in the Wet Mountains on Thursday looking for mushrooms.

We walked into a mother lode of hawk's wing mushrooms (Sarcodon imbricatus), getting that crazy mushroom visual effect where you see one and then suddenly your eyes adjust and you realize that you are surrounded.

I think the king bolete-hunters had already been through, because we were finding only a few old ones (and we were close to the access road), while other similar-appearing mushrooms had been knocked over but left in place.

Then, in a tight, doghair stand of little firs that we had to push into head-down, we found a sackfull. It's like elk hunting: "They're in the thick timber, boys."

The book in the photo is, of course, Vera Stucky Evenson's Mushrooms of Colorado and the Southern Rocky Mountains.

To stay bemushroomed in the literary sense, read Andy Letcher's Shroom: A Cultural History of the Magic Mushroom, which is actually about much more than Amanita and Psilocybe.

For one thing, Letcher demolishes R. Gordon Wasson's distinction between "mycophobic" and "mycophilic" cultures with clear historical evidence.
Posted by Chas S. Clifton at 10:19 AM No comments:

SE Colorado Birding lets you follow SeEtta Moss of Canon City as she lists species that I, for one, never knew lived in this area, like the yellow-billed cuckoo. (Mockingbirds, yes.)

Reading Patrick Burns' Terrier Man blog makes me want to use the word "feral" again, and that would be the second time today that I have used it. Only now I use it in a good way.

Burns is a craftsman as a writer and as a hunter, putting me in mind of this line from the Spanish philosopher Jose Ortega y Gasset's famous Meditations on Hunting:

For hunting is not simply casting blows right and left in order to kill animals or to catch them. The hunt is a series of technical operations, and for an an activity to become technical it has to matter that it works in one particular way and not in another.

(I just noticed that Meditations on Hunting is not included in Wikipedia's list of his publications. Interesting. . . .)
Posted by Chas S. Clifton at 9:08 AM No comments:

'There are no innocent victims in this place'

The bitter pill of environmental history goes down much more easily if you mix in meth dealers, tree thieves, feral gold prospectors, and suicial bridge-jumpers.

Nature Noir, Jordon Fisher Smith's memoir of days as a California state parks ranger, led one reviewer to state, "I can't make up my mind whether Jordan Fisher Smith is John Muir at the crime scene or Elmore Leonard with a backpack."

Can Smith write "noir"? Try this:

She was stoop-shouldered woman in her late thirties who looked like this [automobile] crash wasn't the first bad thing that had happened to her. Her clothing was asexual--old jeans and a lumpy brown blouse. She wore no makeup. Her face was weathered and plain, and bore an expression of blank-faced sadness you see in women whose main talent in life is getting mixed up with the wrong men.

Definately a good read, and you come away knowing more about California parks history, the social history of map-making, what happens when dams are rushed to completion, and Lyme disease.
Posted by Chas S. Clifton at 8:27 AM 2 comments:

The past weeks' rains, at least in the southern part of Colorado, have stoked mushroom hunters like Roger Kahn of Crested Butte. Read the article (before it expires) for a list of Colorado mushroom festivals.
Posted by Chas S. Clifton at 8:30 AM No comments:

'Rags over the River' wrap up

"JC" at High Plains Messenger summarizes the problems with Christo's "Over the River" project from both the human and other-than-human viewpoints.

He comes to southern Colorado and "makes nice" to the residents about how his project will fully consider their views and feelings, but I don't trust him. I read a subsequent article, which I wish I could find online, in which during a presentation in Austin, Texas, he basically referred to people here as ignorant hicks who failed to appreciate (his) great art.
Posted by Chas S. Clifton at 8:11 AM 3 comments:

Jim Harrison on dogs and money

Jim Harrison is a novelist, poet, essayist, and screenwriter. If you are not familiar with his work, a little Googling will bring up a lot of information.

I am reading his memoir/collection of rants, Off to the Side, and offer one of its many aphorisms, this one about his bird dogs:

A dog can escort you away from our current empire and into a more private world where literature is allowed to thrive.

In one online interview, Harrison discusses the moment that writers never forget: the first time that they ever did it for money.

(For me, it was a short story that won a $100 Scholastic Magazines prize when I was a student at Fort Collins High School. I bought a Smith-Corona portable typewriter with my winnings.)
Posted by Chas S. Clifton at 8:30 AM No comments:

Everything listed in the banner is here

Nature (as social construct): Make some time in your life for Jordan Fisher Smith's memoir of days as a California state parks ranger, Nature Noir.

"I can't make up my mind whether Jordan Fisher Smith is John Muir at the crime scene or Elmore Leonard with a backpack," writes Mike Davis in a cover blurb.

M. and I are also reading (listening to on CD, actually) Nevada Barr's Hard Truth. It's a tightly plotted mystery, starring her series protagonist, the indestructible National Park Service ranger Anna Pigeon,but Barr should fire her field researcher. (She is living in Mississippi now.) There is no manzanita in Rocky Mountain National Park, and Abert squirrels on Colorado's Eastern Slope are solid black, without the white tail of the Kaibab Plateau race.

Culture: Bumper sticker seen on a Range Rover in Chama, New Mexico: "Never mind the car. My real treasure is in Heaven." Evidently the Range Rover's owner is a member of the Elect and knows it. Translation: "I am rich, and I am saved."

Environmental news: After my Mexican spotted owl post, I had lunch with Erik Brekke, the BLM biologist who supervised M's and my owl-census fieldwork in the early 1990s. He said that several of the owls banded then are still alive, two of them 13 and 15 years old, which seems ancient for a wild bird. Tough little guys!

He also said that he started hearing Eurasian collared doves in Cañon City, Colorado, as long as four years ago. So maybe this was just the year that M. and I became sensitized to their presence.

Dogs: Radley Balko writes The Agitator blog and works for the Cato Institute, where you will find this essay on family pets killed in SWAT team raids.

The "poster dog" was the Labrador retriever shot down in the misconceived raid on Randy Weaver's house, just before FBI sniper Lon Horiuchi gunned down Vicki Weaver as she held her baby. (Big terrorist that she was, y'know.)
Posted by Chas S. Clifton at 7:30 PM No comments:

M. and I spent Thursday-Sunday camped on the Conejos River in far southern Colorado. Driving in the thick fir forests near Trujillo Reservoir, we saw several groups of people walking into the woods with plastic buckets.

It's mushroom time. It rained every day we were there, sometimes torrentially, like a Pacific Coast rain--no thunder, just downpour.

She picked some boletes on one walk, which went into that night's soup. Had we brought a dehydrator (memo for the future), we could have it plugged in right now at our Taos motel, surprising the maid who wonders why the room reeks of fungus.

Monday's Albuquerque Journal noted that this is the best mushroom year since 1931 in northern New Mexico. (Story behind a pay-wall, but you can wait through the ad.)

In a weird juxtaposition, the same section carried an Associated Press item about Mexican Indians dying from eating poisonous mushrooms.

Wait a minute, aren't they the experts? Maria Sabina and all that?

The story continues, "But recent genetic mutations have made some form of mushrooms consumed for years in Indian communities newly poisonous, officials say."

"Officials say" . . . what officials? The local mayor? What in fact is going on? Is this just bureaucratic bafflegab or an actual biological change?
Posted by Chas S. Clifton at 1:08 PM 1 comment:

A New Mexican's tips for beating the heat.

One of John McPhee's essays mentioned an old-time Wyoming rancher who carried an umbrella as a sunshade. He set it down and ate his lunch in little patch of shade. Can you imagine seeing them at the ranch-supply store? Or in a Colorado mountaineering shop? Someone's missing a marketing opportunity here.
Posted by Chas S. Clifton at 4:37 PM No comments:

Email ThisBlogThis!Share to TwitterShare to FacebookShare to Pinterest
Newer Posts Older Posts Home
Subscribe to: Posts (Atom)
"The point was no longer to show one's hardihood. The point was to be there."