Of Avalances, Machismo, and Derring-Do


Each year, it seems, the reckless streak grows bolder among Colorado skiers and snowboarders, eager to show off their GoPro videos on YouTube and earn bragging rights among their friends.

And each year, on average, six or seven of them will die in avalanches.

He is not sold on the latest gadgets:


[Other backcountry snow enthusiasts] carry specialized equipment designed to help them breathe in a burial or inflate giant airbags instantly to help them stay on top of an avalanche, falsely thinking that replaces good decisions or adequately protects them.

The SAR groups will still have work to do. Humans are hard-wired for risk. I am all for education on avalanche-awareness, but education will never reach them all.
Posted by Chas S. Clifton at 4:30 PM 3 comments:

Mushrooms: Manipulating Your Mind . . . and the Weather? 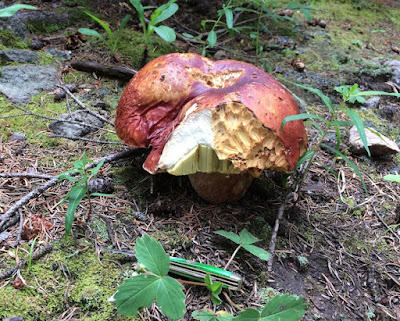 Helen Macdonald's latest New York Times column is on mushroom hunting, in which she observes,


Hunting for mushrooms can feel surprisingly like hunting animals, particularly if you’re searching for edible species. Looking for chanterelles, I’ve found myself walking on tiptoe across mossy stumps as if they might hear me coming. It’s a bad idea to walk around and try to spot them directly. They have an uncanny ability to hide from the searching eye.

And they can change your perception too — and I am not talking about the designated "hallucinogenic" mushrooms either, but the ones we eat for food.

Beyond that, some researchers suggest that mushrooms can make it rain. Their spores are like cloud-seeding.


“We can watch big water droplets grow as vapor condenses on (the mushroom spore’s) surface,” said senior author Nicholas Money of Miami University’s Biology Department. “Nothing else works like this in nature.”

Email ThisBlogThis!Share to TwitterShare to FacebookShare to Pinterest
Labels: mushrooms

Other than some rain in October, it has been a dry few weeks here in the southern Colorado foothills. Dry — and sometimes windy enough — to bring back bad fire memories, like the one in NE Custer County near Wetmore on October 23, 2012.

And it is supposed to be an El Niño year, so where is the snow?

Finally something blew in last night. Although areas north of Colorado Springs (the Palmer Divide/Monument Hill), some High Plains counties, and Raton Pass into New Mexico had blizzard conditions, we awoke to about an inch of snow with a lot of a wind.

(There is more snow in the high mountains, and ski areas are opening.)

Because the 1997–98 El Niño announced itself with a three feet of snow on Thanksgiving weekend, I was expecting more.

But contrary to the "worst yet" headlines, this blog post by Bob Tisdale answers the question "Is the Current El Niño Stronger Than the One in 1997/98?" with "No." Lots of charts and graphs that you can read for yourself.

Still, a little more than an inch would be nice. But a dry early winter is not uncommon here — so long as it is followed by the usual March and April snows. The 1997–98 El Niño actually faded in the spring, which was not extraordinarily snowy.


Yes, there is a Psychedelic Era pop-culture reference in the blog title.
Posted by Chas S. Clifton at 2:26 PM 1 comment:

The Farmer Wave and the Jeep Wave

Call it the Farmer Wave, the Rancher Wave, or the [Blank] wave, you had better learn it hereabouts too. In Iowa, it has an official week, which is just now ending.

And then there is the Jeep Wave. Instead of saying "I trust you," it is saying, "You're more hardcore than I am. And I trust you."

Protocol dictates that (usually) the owner of the newer Jeep wave first, so when driving my 1973 CJ-5 I can just cruise regally along, awaiting my due acknowlegement.

It gets at least 50 points on this scale.

Email ThisBlogThis!Share to TwitterShare to FacebookShare to Pinterest
Labels: culture
Newer Posts Older Posts Home
Subscribe to: Posts (Atom)
"The point was no longer to show one's hardihood. The point was to be there."