• The NRA is putting together free online hunter-education classes — they are only acceptable for a certificate in three states right now, but safety is safety, right? Here is an article about them from American Hunter.

• If you hunt on the High Plains, your eye is drawn to windmills? Is it still pumping? If there water there that might draw quail or whatever? You can still buy one if you need it. Otherwise, here is a good history of American windmills.

•  Range cattle are disappearing in the San Luis Valley, reports Saguache Today. And this being the SLV, the writer can't help write the expected lede: "Missing Livestock. For many residents, these two words usually conjure up one of two images: outlaw-cowboy rustlers or visiting-alien mutilators."


Last November, the largest herd of 46 was reported to have vanished from the Double X Cattle Company as they were out running in the Cumbers Forest Allotment. In total, 114 head of cattle went missing in Colorado during the month of November. And those were the ones that were officially reported.

But seriously, a really big rustling ring? Or maybe some insurance or loan fraud going on.

A  public meeting was held last Thursday—  sounds like it was mostly devoted to reporting procedures.
Posted by Chas S. Clifton at 2:52 PM No comments:

At first I thought this was one of those Internet spoofs, like Jihawg ammunition (contains pork, for use on Muslim terrorists) — just a website, no actual product.

For everyone in the wildland-urban interface, it's armor to product your smallish dog from coyotes and other threats.

And "HawkShield," because raptors are waiting for Max the Llasa Apso to go out on the grass to "do his business."

After all, if livestock guardian dogs can wear spiked colors, why shouldn't little Max have a "vest is made from ballistic nylon reinforced with a special stab-resistant Kevlar® that was originally developed by the U.S. Government for prison guard uniforms."

They'll call him Mad Max down at the dog park.
Posted by Chas S. Clifton at 7:27 PM No comments:

This has not been getting much coverage outside of southern Colorado, but the Navajo Nation has purchased two large ranches in Huerfano and Custer counties, along the eastern edge of the Sangre de Cristo (Blood of Christ) Range.

The photo on the banner of this blog was taken at the Wolf Springs Ranch in northwest Huerfano County.

From the Wet Mountain Tribune:


The acquisition extends the Nation’s presence in the county by another 12,505 acres for an approximate total of 28,855 acres straddling both Huerfano and Custer counties. The land is significant for the Navajo, as it is near the sacred mountain Tsisnaasjini’, also known as Blanca Peak.

In announcing the purchase, Navajo Nation President Russell Begaye said , “It is a blessing for the Navajo Nation to once again have land in the state of Colorado. When land was being designated by the federal government they refused to include Colorado as part of Navajo. We now own more of our ancestral land with the purchase of Boyer Ranch. It is a beautiful place surrounded by mountain ranges in the shadows of Tsisnaasjini’.

He went on to speak about the economic opportunities the new addition brings to the Nation: “This is a place where we can develop the Navajo Beef program and eventually provide more opportunities for our ranchers. There is a good market for quality beef in restaurants and grocery stores and Navajo can meet that demand.”

The Nation’s portion of the Wolf Springs Ranch includes about 400 head of cattle, and over 900 head of bison.

The importance of the Boyer Ranch to the Nation goes beyond ranching however, as the ranch has early priority water rights, and the gravel pit there could be used to develop Nation infrastructure. Vice President Jonathan Nez also sees the potential to one day develop an athletic program that takes advantage of the high-altitude of the land.

“We have some remarkable athletes on the Navajo Nation,” he notes, “and this would be a great opportunity to train our youth and celebrate health and wellness. The land there is beautiful and it is not just for us but also for future generations.”

In other news, restaurant workers in Westcliffe, Silver Cliff, and Walsenburg are learning how to say "Yah-ta-hey" with the correct intonation.

(In other other news, insiders report that the Navajo Nation will petition the U. S. Board on  Geographic Names to rename the Sangre de Cristo Range the Monster-Slayer Mountains.)

Wolf Springs Ranch had been involved in Colorado Parks and Wildlife's "Ranching for Wildlife" program, which is a money-maker for the landowner as well as opening up private land to a limited amount of big-game hunting.  I wonder what will happen with that.
Posted by Chas S. Clifton at 9:54 PM No comments:

Not the Best Snowpack Map I Ever Saw 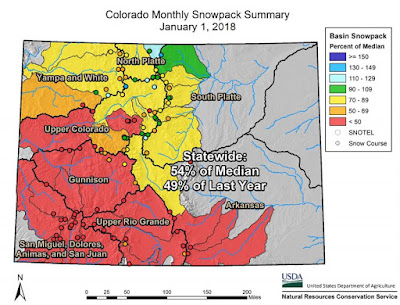 So 2017 was a wet year overall here in southern Colorado but 2018 is starting to look . . . different.  Veteran journalist Allen Best, writing at Mountain Town News, notes,


At the Rocky Mountain Biological Laboratory near Crested Butte, billy barr (his choice of capitalization) has been keeping track of snow and temperatures since 1974. This winter has been surpassed by the lack of snow only by that of 1976-77. What is also notable about barr’s weather records for this winter is the string of highest temperatures, including the highest temperature in his data base for New Year’s Day: 37 degrees. . . .

From Pagosa Springs, Colo., comes this memory from Rod Proffitt:  “I must be getting to be an old timer. I remember the 1976-77 winter very well. I had just moved from Aspen to Cripple Creek to start a law practice, but I had promised some friends I would come back for Winterskol that year.

Believe it or not, I was able to drive over Independence Pass mid-January that year. I had a cousin living in Crested Butte that year. With no snow, the perma-frost went down below the water lines and froze up the whole town. They had a miserable winter that year.

Cripple Creek rarely had a snow cover so their wood pipes were much deeper and survived that winter, but in the Spring a mountain goat died and fell into one of the reservoirs on Pikes Peak. The whole town of Cripple Creek got sick that year. Yes, it was a memorable year….”the year of no snow” to us old timers.”

Best's Mountain Town News e-magazine is the kind of local journalism that we need more of. I'm just waiting for Foothills Town News.

With some sort of collective foresight, Colorado voters had already killed a bond issue that would have helped finance holding the 1976 Winter Olympics in Denver and in various ski resorts. And that was a Good Thing (TM).
Posted by Chas S. Clifton at 6:45 PM No comments:

Better in full-screen mode.
Posted by Chas S. Clifton at 8:35 PM No comments:

Email ThisBlogThis!Share to TwitterShare to FacebookShare to Pinterest
Labels: rain, summer, weather
Newer Posts Older Posts Home
Subscribe to: Posts (Atom)
"The point was no longer to show one's hardihood. The point was to be there."