What the Bears are Eating 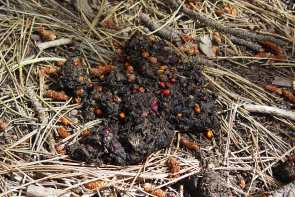 Our intrepid team of southern Colorado nature-bloggers is examining what the bears are eating. The sample above, photographed near the Nature Blog World Headquarters guest house, is full of the berries of Rhus trilobata, also known as squawbush. 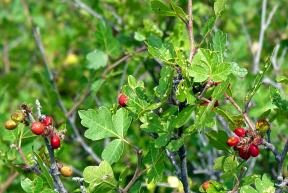 The word "squaw" is hardly ever complimentary, although the idea that it means vagina is apparently an urban legend of the 1970s. The bush's common name came from the use of its branches for basket-making by American Indian women.

To the USDA, it's skunkbush sumac. Skunk? Allegedly from the odor of the leaves.

Dave Van Manen, author of our much-used Plants of Pueblo Mountain Park, calls it "threeleaf sumac" (Rhus aromatica ssp. trilobata). But Betty Derig and Margaret Fuller stuck with "squawbush" in their Wild Berries of the West. Since the word "sumac" usually means the bush or small tree Rhus glabra, whose leaves turn a spectacular scarlet in the early fall, the name threeleaf sumac is a little confusing. I don't think that it has caught on yet.

Meanwhile, the berries are sharp-flavored--edible but not palatable, as the saying goes--and I wonder how much nutritional value the bears get from them.
Posted by Chas S. Clifton at 6:44 PM 2 comments:

Email ThisBlogThis!Share to TwitterShare to FacebookShare to Pinterest
Labels: bears

If you are reading this blog and you live in Colorado or come here a lot, you really do need a subscription to Colorado Outdoors.

It is ridiculously cheap, thanks to its state subsidy. Two years (12 issues) costs the same as 5.9 gallons of unleaded regular, as priced today at the Loaf 'n Jug in Florence.

And its writers get paid too.
Posted by Chas S. Clifton at 5:09 PM No comments:

A Walk in the Wets

Rain threatened, but M. and I set out around noon to see if recent wet weather had brought up any mushrooms nearby in the Wet Mountains.

Yarrow was blooming, mixed with wallflower.

One fir tree displayed a yellow ball of dwarf mistletoe (not the kind that Druids harvest).

The boletes were coming up. We ate all that we harvested tonight. When we get more, we will dry them.

On the way back to the Jeep, we encountered a ferocious beast. (Note to British readers: this is not the kind of skunk that you smoke.)

This half-grown skunk ran down the trail ahead of us with its tail in the air, just like a house cat. It seemed to have no clue about using its main weapon.
Posted by Chas S. Clifton at 5:36 PM No comments:

Email ThisBlogThis!Share to TwitterShare to FacebookShare to Pinterest
Labels: mushrooms

The so-called "Doggie Dining Bill" was signed into law by Mayor Francis Slay at Forest Park Sunday. The measure does not allow dogs to occupy a chair or sit on the table, and they must remain on a leash. Still, under the table, they are masters of all they survey. Restaurants must post their participation and provide hand sanitizer.

(For a brief time in high school, I lived doglessly adjacent to Forest Park. Via Mirabilis.)
Posted by Chas S. Clifton at 1:52 PM 1 comment:

But this direct action was good, you see, because the perpetrators held the moral high ground. I am sure that they would tell you that! (And so would the KKK have said in its day.)

Via Ann Althouse.)
Posted by Chas S. Clifton at 8:43 AM No comments:

Email ThisBlogThis!Share to TwitterShare to FacebookShare to Pinterest
Labels: environmentalism

Where Did You Locate the Thermometer?

The Surface Stations project seeks photos of climate-monitoring stations around the country, pointing out that many are located, for example, next to air-conditioning units or exhaust fans. Others are located in more open areas. The viewer (in some cases) may contrast the readings obtained in each location.

Related: The author of Eco-Scam says he is no longer a skeptic.

UPDATE: It looks as though this paper from a meteorological journal addresses the siting of monitoring stations.
Posted by Chas S. Clifton at 1:19 PM No comments:

SeEtta Moss is out stalking piñon jays and spying on their creche. Read the linked entry and the ones before it.
Posted by Chas S. Clifton at 11:21 AM No comments: 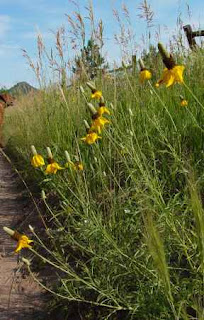 Prairie coneflowers, not realizing that they are in the foothills, are blooming all up and down the driveway.

Rufous hummingbirds have arrived and are exhibiting antisocial behavior at the sugar-water feeder.

It is too hot.

The flycatcher's eggs have hatched. But there is a new plot twist to All My Flycatchers: our remodeling contractor plans to start installing the energy-efficient casement windows that M. has been wanting for years. And he will be working not ten feet from her nest. Will she tolerate the disruption?
Posted by Chas S. Clifton at 10:10 PM No comments:

¶ When performance art meets the question of nature as "socially constructed". Hominids talking mainly about hominid stuff, in other words, without reference to much else.

¶ Ray Ring at The Goat tries to blame a bear killing a boy and the deaths of three men in a Utah wildfire on global warming. But commenters beg to differ--at least about the bear. Blaming large fires on global warming over-simplifies the case too. I remember when a Colorado State University forestry student did her PhD research on historic fires in the Sangre de Cristo range a few years ago. Her tree cores, etc., demonstrated that the 1840s, for example, were a real holocaust on the range's eastern side--and where was global warming then?

¶ Speaking of black bears, what looked like a young one tried to stroll in front of the Jeep last week as M. and I were driving down Colorado 115 between the Springs and Penrose. I gave him a series of short beeps (persons or livestock on the track) and he ran back into the oak brush. Evidently he was on his way to Fort Carson and Tom Warren's loving care.

¶ Walking the site of the Mann Gulch Fire , which Norman Maclean described in Young Men and Fire.
Posted by Chas S. Clifton at 9:52 PM No comments:

Death on the Arkansas

Tracy Harmon, my former colleague at the Canon City Daily Record, summarized this year's rafting deaths on the Arkansas River, a story that several Colorado newspapers have picked up.

Hers is a story that a Fremont or Chaffee County reporter can write every year. While not a big river, the Arkansas is cold and fast in its upper reaches (above Cañon City), and it kills a few boaters every year.

I wrote my own version in about 1990 and got a telephone call in response from Jerry Mallett, now a Chaffee Co. commissioner but back then a p.r. man for the rafting industry.

Why was I writing a "negative" story about the wholesome rafting industry, which does so much for the local economy and blah blah blah?

Jerry, I said, why do so many rafting companies have the word "Adventure" in their names? It seems to me that without at least a remote risk of death, it's not really an adventure.

We never did see eye to eye.

I wonder if Tracy got a similar call from whoever has that job now.
Posted by Chas S. Clifton at 9:18 PM 1 comment:

Journalists are starting to put "cash-strapped" in front of Forest Service the way that they put "tiny" in front of Rhode Island.

This is not only stupid and wrong, it would be a huge historic irony.

When you set the Forest Service's "multiple use" doctrine against the realities of the San Carlos Ranger District, here are the realities:

• Grazing: some, but much less than there was perhaps forty years ago.

• Timber: less important than in the "get the cut out" days of the 1980s, even. I see fewer timber sales than there were back then, and of the three small sawmills adjacent to the ranger district, at least one relies entirely on private lands. There is no one to even bid on a big timber sale.

• Recreation: the main use of the forest. In fact—here is the history part—the very first national forest campgrounds in the Rockies were built on the San Carlos District. (But the FS institutional memory is usually afflicted with bureaucratic Alzheimer's.) The San Isabel NF is all about recreation and not much else.

Take away recreation, and how will those FS staffers justify their jobs?

Right now, this planning exercise was stopped by a decision by the 9th Circuit federal courts that the FS's new speeded-up planning process violated federal environmental laws. So nothing is happening right now—no public meetings.

If it is really all about the budget, the USFS (Agriculture Dept.) plays that game even worse than the National Park Service (Interior Dept. The Park Service, which has its own nonprofit cheering section, has been known to close or threaten to close something prominent, like the Washington Monument at the height of tourist season, if they need to make a point about money.

So why not close down a national forest: campgrounds, offices, the whole thing?

Of course, to do that, some political appointee at the agency's head has to be willing to take a risk.

I just wanted to mention that I am traveling right now, but I will return soon with something about the pivotal role of acorns in the Western United States -- and maybe more.
Posted by Chas S. Clifton at 9:33 PM No comments:

Email ThisBlogThis!Share to TwitterShare to FacebookShare to Pinterest
Labels: blogging
Newer Posts Older Posts Home
Subscribe to: Posts (Atom)
"The point was no longer to show one's hardihood. The point was to be there."