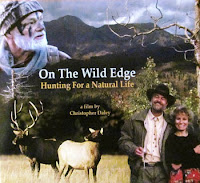 An article from the Durango Herald on a film about bowhunter and nature writer David Petersen, On the Wild Edge: Hunting for a Natural Life.


The film leaves out Petersen’s work as editor for Mother Earth News and his many books including Ghost Grizzlies, The Nearby Faraway: A Personal Journey Through the Heart of the West, and A Man Made of Elk. His advocacy for Trout Unlimited and Backcountry Hunters and Anglers is also omitted. Instead, Christopher Daley, the film’s cinematographer, sound recorder and editor, focuses on Petersen’s version of ethical hunting during archery season in early fall.

But then they published another article about him that covered some of those things!

You can order the DVD here.
Posted by Chas S. Clifton at 3:39 PM No comments:

In the 1959 Russian movie Ballad of a Soldier, a young war hero tries to go home on leave only to be distracted by multiple plot complications until almost his entire leave period is used up.

Could there be a movie called Ballad of a Deer Mouse? The Mouse guerilla moves cross-country, through many interactions and adventures, returning to what he thinks is his new home.

Only it's my home, you cable-chewing little collectivists.

Further analysis reveals that deporting Mice a distance of, for example, 150 yards (or meters) from the house merely creates a "catch and release" situation. "When both house mice and deer mice inhabiting granaries in grassland in Alberta were displaced, homing behaviour was poorly expressed in house mice, but well developed in deer mice."

Some went 1500 meters, even crossing a river and bypassing areas of good habitat.

Another researcher reports, "One [radio-collared Peromyscus] mouse was traced as it returned to its nest 300 meters in 1 hour. This rate of homing is many times more rapid than the rate usually determined by conventional methods for tracking small terrestrial mammals."

The owner of a cafe in Westcliffe, Colo., said last Thursday (as we shared Year of the Rodent stories) that her daughter and son-in-law, who live near the Colorado River in Glenwood Springs, had live-trapped some deer mice and marked them with dabs of nail polish. These were released more than a mile from their house, and at least two came back to be re-captured.


It's Not About Us

When I was at CU-Boulder in the 1980s, I had a friend who moved from Nederland, up in the mountains, to an apartment in town. It was about twenty miles by car. Somehow in the move, her cat ran off and could not be found in Nederland. Some weeks later, it showed at the apartment  — where it had never been before!

We have all heard such stories. There was even a book and a Disney movie about one such "incredible journey."

Our collie-mix dog, the late Shelby, disappeared one winter — I was pretty sure that she was stolen and I had some suspects in mind, but they had disappeared from the area. Two months later, about 8:30 in the morning, she came walking up the driveway, skinny and with her claws worn down to nubs. We never knew where she came back from or how far she came.

These stories  are heart-warming because they show us that our companion critters are indeed incredible, and they want to be with us.

The Mice don't want to be with us. They just want what is ours.

I got five last night in one trap in the garage, all young recruits still in their gray basic uniforms. I was going to town, so they went five miles down the road to what may become the new deportation site, at the edge of a large pasture.

Maybe I should set aside some nail polish.
Posted by Chas S. Clifton at 12:39 PM No comments:

Mouse War: We're Kicking It Up a Notch

This has been a yuge rodent year, deer mice (Peromyscus spp.) in particular. Some friends who live in a similar foothills ecosystem visited last week, and they agreed. One said that her mother, who lives next door, had trapped 66 mice this summer.

And we are just now getting to the cooler weather when they start invading our house in earnest, only it is more like last autumn's invasion never stopped.

I had set traps that I patrolled each day in the garage and connecting basement, but now the Mice are in the house upstairs.

When they ran around on the kitchen counter and gnawed on vegetables left out, we were annoyed.

When we found Mouse turds in the bookcases, we were a little disgusted.

When one got into the bedroom and awakened us at night with its rattlings and rustlings and chewing, we were highly annoyed, especially M. who is a light sleeper at the best of times.

And yesterday when I discovered that a Mouse had chewed the line between the telephone jack and my DSL modem/router, I was ready to declare war. Finding Mouse turds on my desk is one thing, but losing the Internet is serious to someone who works at home.

A red line has been drawn. There is no more "Reset" button with the Mice.

What has changed is that I must fight this war in a blue helmet, because the UN High Commissioner for Rodents (M. herself) has declared that only "humane" methods may be used. No more putting a snap trap baited with peanut butter in every shadowy corner.  Now I am becoming an expert in brands of live trap. (The Havahart two-door mouse trap works well but catches only one at a time.)

Thus the battle has begun. The first step in our larger strategy is to reclaim the bedroom, where Mouse forces had struck at our communications infrastructure. Repairs were quickly made and one of our best traps deployed in case the Mice return. Last night there were no Mouse disturbances.

As we reclaim the living space, having blocked a key infiltration point (where the TV antenna cable enters the living room through the floor) with steel wool, we will again take the battle to the Mouse beachhead, the attached garage. Some food caches have already been located and destroyed.

While sunflower seeds for the birds are stored in a lidded container, we had been leaving the feeders out when we brought them in at night (because of bears). No more! Now the feeders go into an empty garbage can with a lid so that they are not subject to nocturnal pilferage by Mouse insurgents.

At this point, some readers may ask, "You speak of wishing to involve indigenous forces such as Foxes. Why not deploy Cat commandos? They are silent, nocturnal, and effective."

Yes they are, but the High Commissioner, even though she has great affection for Cats, is worried about ethnic friction with the Dog element.

Unlike our previous Dogs, who lived side by side with Cats although they could never speak Cat clearly, this Dog (a/k/a Problem Dog or Rehab Dog) has had no previous Cat training. She fears the consequences of introducing Cat forces into what he considers to be his exclusive area of operations.

Therefore, rather than quick surgical Cat strikes, we fight a war of attrition, complete with holding cells and deportation back to Mousistan (a location about a mile up the road, where I left the rattlesnake).
Posted by Chas S. Clifton at 12:44 PM 2 comments:

I tend to think of skis as a Eurasian invention, while I associate snowshoes with North America. Well, I am wrong.  Proto-Italians worked out the "bearpaw" design more than 5,000 years ago.

Here is an older post about the "true" birthplace of skiing, but the photo link is dead, because this is the Internet.
Posted by Chas S. Clifton at 4:39 PM 1 comment:

You'll Never Leave Harlan Alive – Or with All Ten Fingers

I like to use scout cameras, although I am not as adept as the Codger. Some of my cameras have simply died, a couple were mauled by bears, and one was stolen.

But I have never had one explode.

This summer, exploding booby-trap (or as we say now, IED) cameras were news in Harlan County, Kentucky.

The federal Bureau of Alcohol, Tobacco, Firearms, and Explosives posted a warning:


In Harlan County, Kentucky, there have been three confirmed incidents of improvised explosive devices (IEDs) being hidden inside trail cameras, which exploded and injured people. An operation was conducted and nine IEDs were located and dismantled. Other devices, however, may still exist. Some of the trail cameras were found abandoned on paths in rural areas routinely accessed via the Dave Smith Drainage Area (Woodland Hills Subdivision, Harlan, KY), on the Little Black Mountain Spur in Harlan County.

A suspect was arrested and indicted, but in true Harlan fashion, chose to go out in a blaze of gunfire.

A man who had found one of the suspect's cameras lost several fingers and suffered other injuries. According to reports, the cameras were left up without batteries or data cards in them. When the victim took one home and put batteries in it, he completed the circuit to fire a small explosive charge concealed inside.


Sawaf, an avid hunter, owned and operated Harlan Counseling Inc. since 2014 and had a master’s degree in mental health counseling, according to court documents. The business was in a small strip of offices just off U.S. 421.

And there is a "hillbilly heroin" angle too.


More than a decade before Sawaf’s arrest, his father, Ali Sawaf, was convicted on eight charges related to distribution of OxyContin and other painkillers. At the time of his conviction in 2002, Ali Sawaf was a urologist in Harlan County.

Pop culture reference in the post title — and here is the song.
Posted by Chas S. Clifton at 3:34 PM No comments:

Some years ago, M. and bought a parcel of land — about an acre — adjoining ours, because we were afraid someone would buy and build on it, and we wanted some space. The purchase strained our budget, so we came up with the idea of soliticiting donations for a bird refuge — "Mission: Scrub Jay." (The name was inspired by these people.)

A little bourbon was required for the planning process. If Internet-based crowdfunding had been available in the mid-1990s, we might have gone for it.

Our spokes-bird was going to be Timmy the Scrub Jay. Western scrub jays are far from endangered, but we hoped that donors might confuse them with the Florida scrub jays, which are.

In the long run, the only result was that around here, all scrub jays are named Timmy.

Meanwhile, wheels were turning at the American Ornithologists' Union. All this time, Timmy had been under the impression that he was a Western scrub jay. But as of this summer, he is a separate species with a new name: Woodhouse's Scrub [hyphen] Jay.

He is very pleased with his new surname. He might put up a "Don't Californicate Colorado" sticker. He is indifferent to whether you capitalize Scrub-Jay or not, as he favors neither an Audobon-ish "up style" nor an Associated Press "down style."

He does, however, favor acorns and sunflower seeds.
Posted by Chas S. Clifton at 4:52 PM 1 comment:

Email ThisBlogThis!Share to TwitterShare to FacebookShare to Pinterest
Labels: birds
Newer Posts Older Posts Home
Subscribe to: Posts (Atom)
"The point was no longer to show one's hardihood. The point was to be there."