Are Blogs Coming Back? This One's Not Leaving

I put "Is blogging making a comeback?" into the Duck Duck Go search engine, and learned that quite a few things are making comebacks:
But I did hit some articles such as "Are Blogs Dead? 5 Reasons Why The Internet Says Yes, And We Say No" when I asked, "Is blogging dead?":


The blog, or weblog, has been around for about two decades. That’s a minor eternity in the Internet age, and the term blog has been a flashpoint since the beginning. There are still some who cling to the idea that blogs are written by Cheeto dust-stained losers in their parents’ basements, but the form has mostly gone mainstream. It has remained divisive, though, and it seems you can’t throw a rock without hitting a take about the impending demise of the form.

Given that we are open advocates for blogs with our clients, and that we maintain an active (and we may be biased, but brilliant) blog on the Raka site, you can probably guess where we stand. Still, let’s examine five reasons the Internet thinks blogs are dead, and why every one of those reasons is wrong.

Or "Is Blogging Dead?" No, but bad blogging is dead.


But if I had to be honest with you, I would say that social media should be second in command to your blog. One of the benefits of being a blogger before social media got as big as it is (Instagram especially) is that I learned how to build long-form content that is valuable to my readers (all of you). I learned not only how to use this place as my own personal form of therapy, but also how to provide useful tips, tricks, recipes and DIYs that could help you guys lead a healthier lifestyle. Social media was simply a marketing tool to get the word out.


Blogs haven't disappeared – they have simply morphed into a mature part of the publishing ecosystem. The loss of casual bloggers has shaken things out, with more committed and skilled writers sticking it out. Far from killing the blog dream, this has increased the quality of the blogosphere as a whole.

Even though RSS and feed aggregators failed to go mainstream, content aggregators such as Techmeme and Google News are experiencing quite strong traction. Learning from Google Reader's mistakes, these smart aggregators now conveniently surface fresh and quality blog content for users.

In general, quite a few narrowly focused blogs are doing quite well, especially on political topics.

So here is what I am doing.

First, I cleaning up and reconfiguring the blogroll on the right. Links will now, in most cases, display the title of recent entries instead of how long it has been since something was published.

When possible, I am adding the authors' names for a more personal touch, unless it is an organizational blog, such as Fair Chase Hunting, a group blog, or the author wants to be anonymous.

Second, I want to add more content more frequently, trying to mix the personal stuff with the newsie stuff. You won't see me vlogging though, no matter what the experts say.

I am not trying to make a living at this — no ads, and there never have been. Maybe an Amazon link on a book title, that is about all that I do for monetization.

I hope you'll stick around and read it.
Posted by Chas S. Clifton at 3:11 PM 3 comments:

Email ThisBlogThis!Share to TwitterShare to FacebookShare to Pinterest
Labels: blogging

There's a rumble from the state highway down the valley. It is the second warm weekend day in a row, and "the hatch is on," as we say. Everyone in Colorado Springs or Pueblo with a motorcycle wants to ride it into the mountains. Some don't make it back, and then Flight for Life is landing at what I call Motorcycle Death Corner, an almost-hidden downhill switchback that sneaks up on the happy weekend rider.

But on to happier things. We are not on fire, at least not right now. The prairies are, however. Red Flag Warnings in ten states, including our part of Colorado.  Big blazes like the Rhea Fire in Oklahoma, now more than 286,000 acres. Quite a few smaller ones too — southeastern El Paso County and eastern Pueblo County (Colorado) seem to be getting hammered.

At the Wildfire Today blog, Bill Gabbert labels the OK Bar fire in southern New Mexico as an "under the radar" fire.


The fire is being managed by New Mexico State Forestry using a less than full suppression strategy. Fires not being suppressed do not receive the same exposure from the public agencies as conventional blazes, and this one may get even less in the next few days. After it grew by almost 5,000 acres on Friday, the national Situation Report for Saturday described the fire like this:

Just two weeks ago I was on an Amtrak train chugging through the Berkshires in western Massachusetts. For one thing, there was more snow on the ground than around my house! (It had all melted six days later, on the return trip.)

Since you are usually seated opposite strangers in the dining car, you have these conversations about topics such as train travel or the weather or where you live as compared to where they live and the natural hazards associated with each place.

It's true, people in the East just don't "get" wildfire, or the community PTSD that sets in after one after another after another have come knocking at your door. That's OK, I don't "get" hurricanes.  (Tornadoes, yes.)

I look at our the window at the leafless, grey Eastern deciduous forests passing by and think, "If it's true that the Indians used to burn these woods agriculture or attracting big game, how they manage to do it? Wait for the perfect day in September? Because they always seem too moist."
Posted by Chas S. Clifton at 1:19 PM No comments:

Where the West Begins — The Line is Moving

For instance, on US 20 in Nebraska, Valentine is definitely in the West, but anything east of Ainsworth feels like the Midwest.

Driving west across South Dakota, the Missouri River makes an easy marker. From downtown Pierre, I see the dry hills to the west and feel at home. (It helps that I lived as a kid in western South Dakota.)

Another tradition is just to use the 100th meridian of longitude as the marker. John Wesley Powell, Civil War veteran and visionary Western geographer, made this one popular.  (In this New York Times article, the writer ventures among the natives along the 100th meridian.)

Some climate researchers, however, are now saying that the arid/wet boundary is shifting eastward. "Whither the 100th Meridian? The Once and Future Physical and Human Geography of America’s Arid–Humid Divide. Part I: The Story So Far" is an article published by the American Meteorological Society.

This boundary has moved before. An archaeologist friend pointed out to me that in part of the Middle Archaic period (3000–1000 years ago), trees extended farther east onto the plains. Think of of the "pine ridge" country of the Palmer Divide (eastern Douglas and El Paso counties, Colorado) extending clear to Kansas! "Those were the good times," he mused.

Part II of the article makes this prediction for the 21st century:


It is first shown that state-of-the-art climate models from phase 5 of the Coupled Model Intercomparison Project generally underestimate the degree of aridity of the United States and simulate an arid–humid divide that is too diffuse. These biases are traced to excessive precipitation and evapotranspiration and inadequate blocking of eastward moisture flux by the Pacific coastal ranges and Rockies. Bias-corrected future projections are developed that modify observationally based measures of aridity by the model-projected fractional changes in aridity. Aridity increases across the United States, and the aridity gradient weakens. The main contributor to the changes is rising potential evapotranspiration, while changes in precipitation working alone increase aridity across the southern and decrease across the northern United States. The “effective 100th meridian” moves to the east as the century progresses.

Back in the 1930s, the Dust Bowl ripped through the Southern Plains, as plowed land just blew away. So we stopped plowing so much, let it go back to vegetation, and now it's burning. In the long run, that is probably less destructive — more of a natural cycle —but a prairie fire is a scary thing.

In "Why is Oklahoma Burning,"  weather writer Bob Henson discusses the recent Rhea Fire, which burned more than 242,000 acres.


May 2015 was the state’s wettest single month on record, and 2015 was its wettest year. “The November-December 2015 period was the wettest on record as well, and the sixth warmest. So the growing season extended into winter to some extent that year,” said McManus. The result was an unusually lush landscape going into the first part of 2016 that dried out quickly in the weeks leading up to the Anderson Creek fire.

Likewise, the summers of 2016 and 2017 were on the moist side, said McManus. “We also had a pretty severe ice storm during January 2017 that left lots of big fuels on the ground waiting for that spark,” McManus said. Later that year came the the state’s second-wettest August on record. “August would normally be a time we'd get rid of some growth in our typical summer burn season,” said McManus.

The landscape of the Southern High Plains has been extraordinarily dry over the last six months. The western third of Oklahoma has seen little more than 2” since October—only about 20% of average—and most of the Texas and Oklahoma Panhandles have received much less than 1”, making it the driest six months on record in some locations. Any moistening of the landscape has been all too brief, which has left the landscape highly vulnerable to a spell of fire-friendly weather.

Some good photos there too.
Posted by Chas S. Clifton at 5:04 PM 1 comment:

Ingenious deduction on the greatest detective's favored pocket knives, as relayed by The Truth About Knives blog.
Posted by Chas S. Clifton at 4:00 AM No comments:

Email ThisBlogThis!Share to TwitterShare to FacebookShare to Pinterest
Labels: knives

Fighting Off a Coyote with Wrestling Moves

This is outside the Southern Rockies, but M. and I are in Salem, Massachusetts right now, where a Boston television station carried this report of a man fighting off a coyote.

Maybe those Eastern coyotes really are more wolfish than ours!

Fortunately, brave doggies showed up in North America at least 10,000 years ago, according to some new research from Illinois. Were they pulling sleds? No one is sure.
Posted by Chas S. Clifton at 5:05 PM 1 comment:

Someone Was Eaten Here

A few weeks ago, I was walking up on the national forest and found this collection of fluff on the ground. 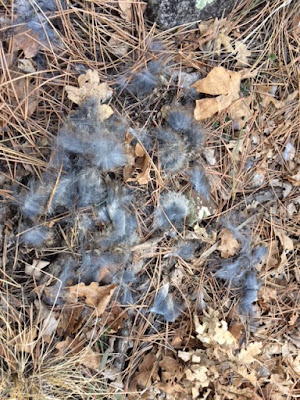 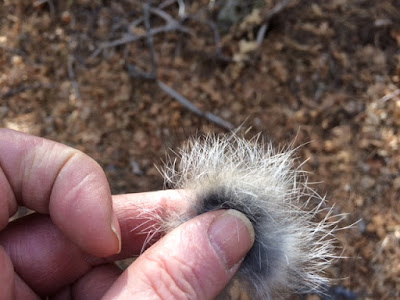 I think that a raptor, such as a red-tailed hawk, smacked down a cottontail rabbit there and tore it open to eat it, but I cannot be sure. The almost circular pattern of the distributed fluff seems to suggest a bird to me rather than a four-footed predator

Email ThisBlogThis!Share to TwitterShare to FacebookShare to Pinterest
Labels: raptors, Wet Mtns.
Newer Posts Older Posts Home
Subscribe to: Posts (Atom)
"The point was no longer to show one's hardihood. The point was to be there."