A Colorado Moment and a New Book on Yellowstone Death, Nature, & Science

So I sold a pair of World War 2-vintage snowshoes on eBay and used the money to buy hemp oil (CBD) for my dog.


What I want to read:

Jordon Fisher Smith, whose Nature Noir: A Park Ranger's Patrol in the Sierra

is one of my favorite reads, has a new book out, Engineering Eden: The True Story of a Violent Death, a Trial, and the Fight over Controlling Nature.

"Harry Walker had come to Yellowstone in 1972 in search of himself. Instead, he became a tragic symbol of poor wildlife management and the killer grizzly bear. Walker’s death prompted a fierce debate over the human role in engineering nature, with some of the biggest names in wildlife biology at the time on either side.

"While a tempest of people, places and ideas rage within the pages of Engineering Eden the author is a calm voice in the storm, letting the reader take it all in and form an opinion of their own."

In this interview with a Florida NPR station, he says,  "“I wanted the artistic form of this narrative nonfiction work to resemble the endless interconnection of nature itself. Instead of saying to my reader, ‘Okay, now watch this. I’m gonna try to really make this complex web of relationships right in front of you,’ I just did it.”

(I really dislike the phrase "find yourself" or "in search of himself," etc. You don't just find yourself out there lying on the ground out in the woods; you build yourself by what you do day to day.)
Posted by Chas S. Clifton at 12:40 PM 3 comments:

Let the Women Carry the Loads

Some time ago, I blogged a fascinating tale of South American exploration, The Lost City of Z. Oh, to enjoy the bounty of "rain, unceasing rain" again, as it fell six springs past!

More recently, I returned again to that book, following trails out from it, as in reading advice on wild-country travel by Francis Galton (1822–1911), a long-time member and officer of Britain's Royal Geographical Society. Its author, David Grann, writes,


During the Society's early years, no member personified the organization's eccentricities or audacious mission more than Sir Francis Galton. A cousin of Charles Darwin's, he had been a child prodigy who, by the age of four, could read and recite Latin. He went on to concoct myriad inventions. They included a ventilating top hat; a machine called a Gumption-Reviver, which periodically wet his head to keep him awake during endless study; underwater goggles; and a rotating-vane steam engine. Suffering from periodic nervous breakdowns––"sprained brain," as he called it––he had a compulsion to measure and count virtually everything. He quantified the sensitivity of animal hearing, using a walking stick that could make an inconspicuous whistle; the efficacy of prayer; the average age of death in each profession (lawyers: 66.51; doctors: 67.04); the exact amount of rope needed to break a criminal's neck while avoiding decapitation; and levels of boredom (at meetings of the Royal Geographical Society he would count the rate of fidgets among each member of the audience).

Galton attempted to quantify everything about exploration, from daily dietary needs to the maximum feasible load for a donkey, mule, horse, or camel on different types of terrain.

You may sample his calculations in his book The Art of Travel; Or, Shifts and Contrivances Available in Wild Countries, available as a free download from the inestimable Project Gutenberg.

He also rated women highly as "native bearers" for several reasons, quoting the explorer Samuel Hearne on the matter:


As the [Chipawyan?] chief said . . . "When all the men are heavy laden, they can neither hunt nor travel to any considerable distance; and if they meet with any success in hunting, who is to carry the produce of the labour?" . . . "Women," said he, "were made for labour: one of them can carry or haul as much as two men can do. They also pitch our tents, make and mend our clothing, keep us warm at night; and in fact there is no such thing as travelling any considerable distance, or for any length of time, in this country [northern Canada] without their assistance."

"Women," said he again, "though they do everything are maintained at a trifling expense: for, as they always cook, the very licking of their fingers, in scarce times, is sufficient for their subsistence."

That was Galton quoting Hearne, I believe, but the original speaker may have been a man named Matonabbee, who has his own Wikipedia entry. In his own voice, Mr Galton comments further, videlicet:


I believe there are few greater popular errors than the idea we have mainly derived from chivalrous times, that woman is a weakly creature . . . . It always seems to me that a hard-worked woman is better and happier for her work. It is in the nature of women to be fond of carrying weights; you may see them in omnibuses and carriages, always preferring to hold their baskets or their babies on their knees, to setting them down on the seats by their sides.

So, gentlemen, if you go afield backpacking with a member of the female sex, let her carry the tent.
Posted by Chas S. Clifton at 4:22 PM 1 comment:

Tunnel Vision, Survival, and Who Lives

Your ship sinks, your airplane crashes, you are sliding on your back down an icy slope into a crevasse — will you be the survivor?

I had read bits of Laurence Gonzales' Deep Survival: Who Lives, Who Dies, and Why but never the whole thing until a couple of weeks ago when I chanced across a used copy.

The first part mixes stories with a quick guide to brain function, especially Our Friend the Amygdala and the wondrous intelligence-reducing effects of the stress hormone cortisol, which makes you stupid.

Or as Gonzales' father, a World War II bomber pilot said, "When you walk across to your airplane, you lose half your IQ," a line echoed by a contemporary Navy pilot who observes that during the stress of a nighttime  carrier landing, "Your IQ rolls back to that of an ape."

It's that stress-induced tunnel vision that comes up again and again. Learning to get past it is the most valuable thing, whether it is through training, through mentally rehearsing scenarios, a little bit of body memory —or maybe the need to focus on other people's needs.

I am not a pilot, but I remember one day when I was still new to our little volunteer fire department. I had to take out the brush truck (small wildland fire engine) for a call. Normally you need two people, minimum, but this was a case where I would be picking up the second person en route to the incident, which is permitted.

I opened the engine bay door, walked around the truck to check for open compartment doors, unplugged the battery trickle charger (I've heard of other people at other departments driving away and yanking out the wires!) and started the engine. I pulled out, thumbed the door-close button on the remote, and called Dispatch to say I was leaving the station.

Then I pulled out onto the highway and could not remember how to turn on the overhead light bar. Traffic was light, I kept going, and when I pulled off to pick up the other firefighter, it hit me: You move that little lever down there. Maybe having someone else with me reduced my stress enough that I could remember. Memory of what to do came flooding back.

In this book's second half, he drops the brain chemistry, instead mixing his stories with Stoic philosophy, the Tao Teh Ching

, and some distillation of basic principles for survival.

When you look at Gonzales' twelve-step plan for survivors, you have to realize that it is not all about falling a mountain or lying alone in a life raft. Maybe you need those twelve steps on the day your boss calls you in and says you're laid off. (He has a newer book called Everyday Survival: Why Smart People Do Stupid Things

What Keeps Me Awake at Night

The future seems to have two probable paths.

1.  A dry winter thus far here in the foothills (the high mountains have lots of snow) means extremely high fire danger this spring and summer. Despite Nature's and humans' best efforts, we have not yet burned all the trees around here.

2. Some typical spring snows and rains break the winter drought but also create debris flows and flooding coming off last October's 18,400-acre burn scar, much of it coming past my area and down into town. (Not as big as 2013's floods up north, but potentially devastating on a two-county scale.)

My house is well above any potential flood short of the "End of the Ice Age" melt, but if both of two bridges were slammed by floating logs or otherwise knocked out, I would be back in the foot-travel and dog-travois era.

A team from the Army Corps of Engineers Albuquerque district office has been here. They are quite excited about studying the burn scar's flood potential from hydrological and other perspectives, but that is all they can do for us short of a federal disaster declaration, which has not happened yet. (A few body bags would speed up the process, one suggested.)

The flood potential may last for years. That's what they want to study. Yay science!

They did conduct sandbag training today, however. I feel so much better. A neighbor and I laid the first few bags today to protect our shared well house, which sits closer to the creek.

All joking aside, isn't it better to do something and also worry instead of just worrying by itself?
Posted by Chas S. Clifton at 2:25 PM 2 comments:

Nuts to You, Says Abert's Squirrel

Everyone thinks of squirrels as caching nuts (thus inadvertently planting trees), but not the Abert's squirrel of the Southern Rockies and Colorado Plateau.

Many are a sort of salt-and-pepper grey (like these), but in southern Colorado they are mostly black. I think I have seen one grey one near the house in twenty years.

Its name is one of those 19th-century "Westward the course of empire" relics, for it is named after James William Abert—explorer (Corps of Topographical Engineers), artist, and Civil War staff officer.

As Lieutenant Abert roamed the West in the 1840s, his proud father wrote to John James Audubon, "My son, Lieut. A., has some taste for Natural History. He has just returned from Santa Fe, having been on General Kearney's expedition. . . "

Together with collecting specimens, he also discoursed in the 19th-century manner on color theory for artists interested in natural history.

You can see Lt. Abert's reconstructed room and sketchbook at Bent's Old Fort, where he (and Everyone who was Anyone) stayed c. 1846.
Posted by Chas S. Clifton at 1:03 PM 2 comments:

Snowpack and Drought Status for March 2017 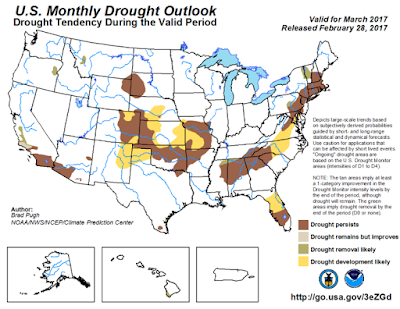 Email ThisBlogThis!Share to TwitterShare to FacebookShare to Pinterest
Labels: Colorado, drought, snow, winter
Newer Posts Older Posts Home
Subscribe to: Posts (Atom)
"The point was no longer to show one's hardihood. The point was to be there."