"Colorado bear population much bigger than expected, new study finds." The headline
actually describes a study in Summit County, but it is not the only one.


Researchers found that in every study across the state, in habitats that ranged from good to poor quality for bears, the bear population was double the numbers wildlife managers had been using before.

But  Rutgers University student Darsh Patel might still be alive if he and his friends had acted sensibly.

"The hikers broke off in different directions . . . " Not a good idea. If champion sprinter Usain Bolt was matched against a black bear over fifty yards, I would bet on the bear.

Our ancient ancestors no doubt realized that they could not outrun big bears, big canids, or big cats.  I suspect that five people standing solidly together, yelling, and throwing stuff would stand a better chance of continuing life.

Three Coloradans have been killed by black bears since the 1970s, which is a low percentage considering the number of bear encounters. (I have lost count of my own.) Most black bears are shy, but a few are not, either because they have become used to a human-provided food source—or, in some cases, because they may just be extra-aggressive individuals.

Wikipedia's North American Fatal Bear Attacks database is worth reading. It is not always possible to see what caused the incident or whether it was food-related.

UPDATE (Nov. 27, 2014): Patel's cell phone photos have been released. Was this a "mugger bear"—one that had learned to intimidate people in order to get food?
Posted by Chas S. Clifton at 2:50 PM No comments:

The Pioneer Days king and queen, in a buggy drawn by a matched pair of white horses, clatter up alongside the fire engine.

“We’re supposed to follow you,” says the queen, who has the reins. “You’re not going to be siren-ing, are you?”

She is relieved. The horses have been nervously watching the high school marching band, practicing nearby. Ford 550 brush trucks don’t bother them — they know trucks — but forty kids in shakos banging drums and playing horns are definitely Strange and Possibly Threatening. Their ears tilt forward and their eyes seem to bulge.

For the first time since 2009, we have sent an engine down to participate in Florence’s parade. Are not all small-town parades about the same? I always flash back to my boyhood in Rapid City, although by comparison, this parade is short on Indians and U. S. Air Force units.

There is, however, Fort Carson’s mounted color guard in their quasi-19th-century uniforms, and when the fire house siren sounds, they lead off.

In a small fumble of parade-marshaling, someone has placed the second color guard with their piper right behind the high school band, so after a quick run-through of “Scotland the Brave” (hey, the vote was two days ago), the piper decides not to compete with the band kids’ music.

Up front, the local fire department is siren-ing, but looking in my mirror, it appears that the queen has her team under control

Rounding the curve onto Main Street, we are briefly halted, while a Forest Service engine and the Fremont County sheriff’s wildland fire team pull in ahead of us — three more brush trucks. I let a short gap open up — we’re not them, we’re us.

Up ahead, the band kids’ gold shakos waver in the heat waves rising from the fire trucks. “It’s the 'Your Tax Dollars at Work' parade,” I say to J., who is waving from the right-hand seat.

Really, aside from two high school bands, Shriners on big motorcycles and tiny cars, and a some entries by local stores, there are few home-grown entries.  The majority appear to be governmental (if you count schools too). That is troubling. Not even a classic-car club.

It is over so fast, and we break formation on a side street, turning toward the highway back into the mountains, going home.
Posted by Chas S. Clifton at 11:35 AM No comments:

A Quick Journey to Fungal Paradise

Just back from Anchorage, a trip that was part work and part pleasure. Alaska is outside the remit of this blog, but I wanted to record a few images none the less.

The train photo is from the Coastal Classic train, almost purely a tourist train, where the engineer slows way down when the onboard guide announces a moose or bear sighting. The water is Kenai Lake.

My hosts are extraordinary urban foragers, and their 8-year-old son celebrated his birthday by inviting some of his friends to go mushroom hunting, which is to say that some hunted mushrooms (none knew as much as he already does) while others just ran around waving sticks, but it was all good. Afterwards, ice cream.

Some of the moms and dads were there too, to keep an eye on the kids and watch out for free-range moose. But actually, when the boy and I went geocaching in another of Anchorage's large and mostly wild city parks, it was he who spotted the moose while I was busy looking at the GPS receiver!

I was seeing mushrooms that I knew only from books, and there were countless other colorful fungi to photograph and marvel at.

Coming home, the 737's overhead bins were full of fishing rod cases, and yes, I was a little envious, but at least I had a bag of Alaska gold (Phaeolepiota aurea) in my suitcase.

The Anchorage Parks and Recreation Department is so good that they know what the bears will be doing next year.
Posted by Chas S. Clifton at 9:53 PM No comments:


From northwestern Wyoming, Cat Urbigkit posts a brief video of her family's sheep coming down from summer range. The dogs, of course, are at the end.


This video demonstrates transhumance — the season movement of livestock and people, something that occurs throughout the American West. Most range flocks include about 1,000 ewes, accompanied by their lambs.

This Wyoming flock is owned by a family ranch, one of 600 range outfits in the West. Last week was the 50th anniversary of the Wilderness Act, and this was my family's way of celebrating what wilderness means to us — cheers to man and beast!

All the dogs with black coloration are herding dogs (5 or 6 with this herd). There were 7-9 livestock guardian dogs with this bunch as well - both white and some red-coloration (representing Akbash and Central Asian Ovcharka lineages). 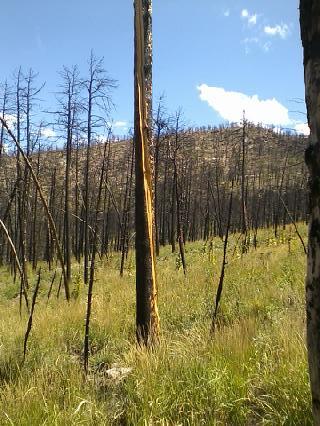 Lightning struck near the house yesterday afternoon, and the shock wave felt like a big foot coming down, while the windows rattled and buzzed.

The incident reminded me of this cell phone snapshot from last month, taken up on the 2012 burn — one of two recently lightning-struck tree trunks close together. Both were already dead, of course.

Keeping me eye out for anther blasted tree like this one, closer to home.
Posted by Chas S. Clifton at 10:25 AM 2 comments:

Email ThisBlogThis!Share to TwitterShare to FacebookShare to Pinterest
Labels: lightning, weather
Newer Posts Older Posts Home
Subscribe to: Posts (Atom)
"The point was no longer to show one's hardihood. The point was to be there."