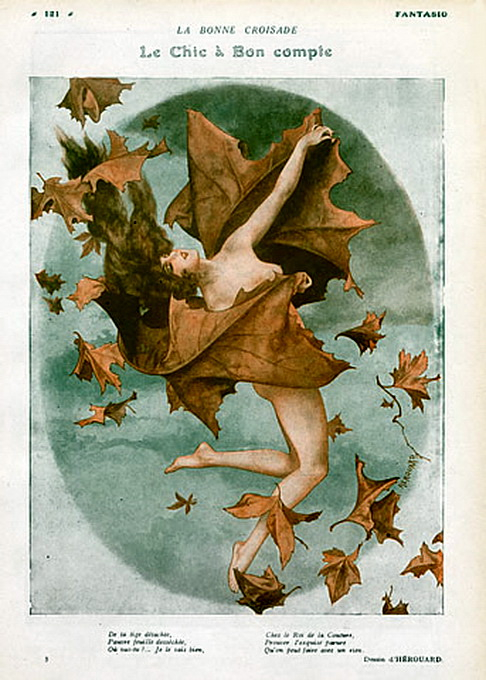 . . . as interpreted by a fin de siècle artist. We have entered the decadence of autumn as the golden leaves turn brown.
Posted by Chas S. Clifton at 5:07 PM No comments:

Email ThisBlogThis!Share to TwitterShare to FacebookShare to Pinterest
Labels: fall

Opponents of Colorado GMO-Labeling Offer Nothing But Scare Tactics

The "no," anti-labeling forces have spent $11.2 million, filling my mailbox with billboard-size brochures. The "yes" group, "Right to Know Colorado"  has spent less than $500,000.

The "no" people would like to say two things, but there is a slight contradiction between them.

1. "Genetically modified foods are perfectly nutritious and represent an advancement in agriculture."

. . . exactly why,  they can't really say, so there is a lot of smoke and mirrors and hand-waving and "Look over there!" coming from the people with the millions to spend.

Watch out! Requiring an extra line of type on the label will require a "huge bureaucracy." It will represent "unreliable information" (Like, how?) It will be "arbitrary" (Aren't all laws arbitrary?).

And so on. Look over there, here comes a huge bureaucracy!

No information. No argument based on logic. (You will find the nearest thing to that in the comments here.) Just scare tactics. And lots of Monsanto money.
Posted by Chas S. Clifton at 4:56 PM No comments:

You drive through the prairie states at this time of year, and there are lots of "Welcome Hunters" signs on motels and stores. Pheasant season is at its peak, especially south of Interstate 94, which seem to follow some kind of climate boundary—there are fewer pheasants north of it.

Where I am staying right now in Valentine, Nebraska, I can see people walking bird dogs under the motel's red neon lights. On the highway, pickup trucks with dog boxes, some pulling duck boats, flash past.

"That October, the weather couldn't decide what to do with itself. Some days it arrived gray and bleak and pensive. Ponderous leaden clouds leaned overhead, their bellies slumped against the peaks of the Sangre de Cristo Mountains; polar blasts of wind and stiff black leaves blindly scrambling down the streets. . . . . Other days, the weather arrived sleek and sassy. The air  was warm and it had a glitter to it, and a fizz. Only one of two clouds trailed across the taut blue sky, each fluttering brilliant white from the shoulders of the mountains like an aviator's scarf. Sun-besotted, people stood around wearing summer slacks and summer skirts and grins that were grateful and a little bit guilty, the grins of children who had pulled a fast one on their parents. They licked ice cream cones and they sipped sodas and they were very vocal about the wonderfulness of the climate, and in their voices you could sometimes hear a hint of self-congratulation at the wisdom they had shown in choosing to live [in Santa Fe]."


The opening of Flower in the Desert, a mystery by Walter Satterthwait
Posted by Chas S. Clifton at 1:00 PM No comments:

"Someone" Was Living in that Hole

Monday we hiked one of our favorite old trails, severely burned over in 2005. That fire was followed by a flash flood the same summer, wiping out parts of the trail, and then came an influx of invasive weeds. The weeds are not so bad now — there is more grass — but you still have to pick your way over trunks of dead trees that have toppled in the intervening years.

M. is enough of an animist that of course she would say, "Someone is living in that hole," as opposed to "an animal of some sort." Isn't an animal "someone"? (It's the second item under "Sept. 15.")

Bicycle commuting supposedly skyrockets — but in Colorado Springs, it's all about fun, not about going to work. "The Springs is probably the best city along the Front Range for mountain biking," said Tim Halfpop, manager of Old Town Bike Shop on South Tejon Street. "But we're the worst for road riding and getting around town."

The founder of Wiggy's, the low-profile but respected outdoor gear maker in Grand Junction, is promoting lamilite, a continuous-fiber synthelic insulation. I am just re-reading Ernest Hemingway's novel For Whom the Bell Tolls, set in the mid-1930s during the Spanish Civil War, in which the American protagonist, Robert Jordan, extolls the virtues of his eiderdown-insulated "robe," for which he paid $65 — more than $1,000 today, according to one calculator. Makes Wiggy's bags look like a deal.

Rich French diners are still chowing down on endangered birds. It's tradition, you see. "Captured Ortolans are kept and fed heavily for at least three weeks until they resemble a small fat ball. Once they reach a specific weight, the unfortunate birds are drowned in a French liqueur called Armagnac, before being prepared or sold. In France, the price for such a peculiar 'delicacy' easily reaches 150 Euros ($189 US)."

Did I mention that ze artiste Christo has admitted that his plan to hang plastic panels over the Arkansas River is "at a standstill"? No doubt some art auction house will sell copies of his legal filings. It's all conceptual, you see.

In the Southeastern San Luis Valley

No, You Won't Be Charged to Take Photos of Your Wilderness Hike

Lots of hysteria recently around an admittedly poorly present U. S. Forest Service announcement on fees for commercial photographers in wilderness areas. Typical was this from the Outdoor Wire's Jim Shepherd:


It may sound far-fetched, but a program like this could mean a wilderness visitor who snapped a photo using a smartphone and later posted it on a personal blog could be considered a "media outlet" and face a $1000 fine.

It not only may sound far-fetched, it is far-fetched. As this headline reads, "No, the Forest Service is Not Planning to Charge You $1500 to Photograph the Wilderness."


Put away the pitchforks, folks. After reading some of the recent horribly misleading media coverage of a proposal by the US Forest Service, you might think that members of the media (down to – and yes, including! – us lowly bloggers) are about to be banned from all National Forest lands. You might even be forgiven for thinking wildlife, landscape, or casual photographers selling their prints online or at a local art show or gallery are about to be hit with an onerous fine.

I checked with semi-pro photographer Jackson Frishman, who does lots of photography in designated wilderness areas. His response, via email


I'm guessing the FS is mainly viewing it as a way to keep productions out of wilderness that don't really need to be there (e.g., the Lone Ranger 2 doesn't need scenes filmed inside the wilderness boundary, find a non-wilderness location instead), but I'd question whether that's actually a common enough problem to merit a solution, given the existing rules of wilderness and the logistical needs of major productions. I could see those guidelines being used to harass investigative journalism critical of FS policy (though to be fair, such a situation might also be pretty much non-existent in practice).

Read the Forest Service's "we didn't mean it like that" news release here.

What we have here is just fed-bashing from the usual suspects. Given that it is an election year — and we have a Colorado Republican gubernatorial candidate who wants to see public lands handed over to the state or privatized (Colorado, that can barely fund its state parks, is going to take over, e.g., Rocky Mountain National Park??) — I can't help but see a connection.
Posted by Chas S. Clifton at 10:31 AM No comments:

Email ThisBlogThis!Share to TwitterShare to FacebookShare to Pinterest
Labels: Forest Service, photography, politics, wilderness
Newer Posts Older Posts Home
Subscribe to: Posts (Atom)
"The point was no longer to show one's hardihood. The point was to be there."