The human prints are of a barefooted child aged eight to ten years old and standing about 4.5 feet (1.4 meters) tall. The child was walking, not running, although at one point it appears that he or she slipped a little in the soft clay. Researchers know that the child carried a torch because there is evidence of him/her stopping at one point to clean the torch, leaving behind a stain of charcoal.

It is amazing to think of a Paleolithic kid exploring this ancient cave, examining the paintings and bear skulls that were placed reverently at the back of the cave. Even more amazing is that accompanying (not stalking) the child’s footprints are the paw prints of a wolf (or possibly a large dog). This timeless image of a child and dog shatters the notion that dogs were only domesticated 15,000 years ago. More importantly, the new time period radically alters the answer to how dogs became man’s best friend.

• There are more prairie dog towns in Colorado than we thought. But I am still sorry that my sister did not ever follow up on her plan to clandestinely reintroduce them in South Park, from where, she said, they had all been poisoned in the mid-20th century.


When I interviewed Western writer David Petersen for a magazine article several years ago, I really only had one question to ask him: Could hunting be morally defended in the 21st century?

At a time when few people seem concerned about that question — either they’re already convinced that hunting is barbaric, or just the opposite, that it’s a right that ought to be exercised with as few restrictions and as easily as possible — Petersen has spent much of his life examining what it means to kill in order to eat.

More about his hunting-ethics documentary here.


Currently, archaeologists have to rely on relatively sparse evidence for dating the history of Western civilisation before 763 BCE, with Chinese history also only widely agreed from 841 BCE. For example, they depend on ancient records of rare astronomical phenomena, such as the solar eclipse during the ninth year of Ashur Dan III of Assyria, to determine the age of historical events. In the absence of such records, standard radiocarbon measurements provide the best estimates, but these are still often only accurate to within 200 to 300 calendar years. If the radiocarbon spikes in the tree-ring data were also found in archaeological items attributable to specific historical periods, the information could be used to anchor exactly when events occurred, says the paper.

Colorado Forests Are Changing. Part of Me Likes That.

I spent last weekend camping with friends on the White River National Forest in Summit County, Colorado. The mountain pine beetle worked its magic there some years ago, which means there is lots of firewood in the form of dead trees.

Let's take the long view, if we can. Only what we think is a long view is just childhood for a tree.

According to the Colorado State Forest Service, one in fourteen forest trees in the state is dead, for a total of 834 million standing dead trees. (A projection from sample counts, that has to be.)


Infestations of mountain pine beetles and spruce beetles are the main cause of the die-off, [State Forester Mike] Lester said. Beetles are native to the state but have caused far more damage than normal over the past 20 years, attacking more than 7,900 square miles of forest, or more than 20 percent of total forested land.

A big post-fire issue is flooding with associated erosion — I will be writing more about that later this spring.

And then there is Our Friend the Spruce Beetle.

Some people are saying that the highly visible, highly visited forest along the Front Range will "never look the same."


Limited conifer regeneration following wildfires in dry ponderosa pine forests of the Colorado Front Range, by Fire Ecologist Monica Rother and CU-Boulder Professor of Geography Thomas Veblen, surveyed conifer regeneration at six low-elevation Front Range sites that burned eight to 15 years before. Released in December and published in the journal Ecosphere, it found that "current patterns of post-fire seedling establishment suggest that vegetation composition and structure may differ notably from historic patterns and that lower density stands and even non-forested communities may persist in some areas of these burns long after the fire[.]"

That prospect does not bother me on one level. I find the "start-up phase" of forests to be interesting. The big-game hunting is better too. Now if your house in the woods burned to the ground, you may not feel that way. And if you look at trees just as unharvested timber, you may not agree with me.

(But some of the land that has burned around me was never logged, because it is just too steep and rough. Other areas were logged in the late 19th and early 20th centuries, but then not managed for timber sales after that because of low productivity.)

Out of Asia, Always Something Old

When it comes to outdoor sports, Americans tend to favor gear over technique. We want to ride or ski on what the racers use, or what the pros use. "I know that this $1,200 fly reel machined from unobtainium alloy will make me a better angler!"

I chuckle a little at the converts to tenkara fly-fishing with their newly learnt Japanese vocabulary, because I think it is just the 17th-century English fly-fishing that Izaak Walton would have recognized — but with contemporary high-tech materials.

Yet I appreciate and support the minimalism of tenkara. A rod, a line, a few flies —go do it! It really works.

Getting around in the snow.

I have owned snowshoes since my teens, then got cross-country skis in my twenties (I wish that I had started sooner).

Both let you move through snowy landscapes (not too steep). Both have long historical pedigrees. We identify snowshoes with North American Indians, but they were also used in Stone Age Europe. They are what you make with stone tools.

With metal tools, you can cut and shape boards, giving you skis. Archaeologists suggest that skis were invented in Central Asia, but maybe they were invented independently in Scandinavia.

In a century, ski touring bindings went from simple straps that you slip your toe under (why Finns wore boots with turned-up toes) to these (or fancier). Synthetics largely replaced wood.

Even as tenkara gets rid of the reel and the long fly line, a new Asian-inspired approach to ski touring takes a middle road between snowshoing (slow, utilitarian) and Nordic skiing (faster but trickier on steep slopes).

Some skiers are even getting rid of ski poles and returning to a simple stick, like these guys: 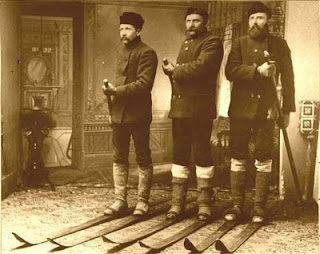 Or, more appropriately, like these guys — contemporary skiers in the Altai Mountains.
Formed in 2011, with offices in the US and Canada, Altai Skis revived the Central Asian style of wide skis with skins permanently attached. Their first model, the Hok (from Tuvan for "ski"), comes in just two adult lengths, 125cm and 145cm (and a 99 cm kids' model). It has metal edges and a permanently installed nylon skin with waxable Ptex tips and tails.

If you're more of a snowshoer at heart, you can buy bindings that fit any winter boot. If you come from an x-c ski background, you can get regular or cable 75mm three-pin bindings or adaptors for other styles, like NNN.

And for forty bucks, they will sell you a Tiak ("stick") if you can't make your own.

The problem with skiing here in the southern Rockies is that good snow and gentle terrain does not happen often enough. To get good snow, you have to move into more rugged forested areas and break trail. Lots of people use snowshoes with ski poles, which seems silly on level ground but helps when you're in powder on a slope.

After decades of flipping between speed (x-c skis) and flotation (snowshoes), I learned about the Altai Skis and bought a pair of 145cm Hoks (They also have a slimmer, faster backcountry model called the Kom,with fishscale waxless bottoms.)

I put three-pin cable bindings on them, because I have the boots, and in a nod to old-school skiing, have been using some old bamboo poles. I always wanted to be the last guy in Colorado with bamboo poles. One day I will cut a pine stick though; skiers with sticks do have an archaic silhouette. The stick is for balance and braking, but does not give the diagonal-stride push of the ski pole.

I took them out for two short test runs along the Sangres and then yesterday for a two-hour trip along the base of the Sawatch Range. My first thought was "Comfortable! I can go right into the trees with these."

The first two trips were more for familiarization and adjusting bindings. Yesterday I alternated between following a marked trail and going into untracked snow, up to knee-deep with some wind crust in places.

The Hoks certain held me up better than my skinny skis as I moved from soft snow to crusted powder to packed powder-and-ice. But unlike with snowshoes, I could get a little bit of a glide. Breaking trail is always work no matter what you use.

I have not yet used the Hoks in fresh deep powder, but an opportunity will come.

Aristotle, (384 to 322 B.C.), referred to the proverb in two of his books, Historia Animalium and Generatione Animalium, to explain the wild mélange of animals in Africa. He wrote that many of the animals unique to Africa were strange hybrids, suggesting that the lack of water forced the animals to meet at watering holes where they mated indiscriminately with one another.
Posted by Chas S. Clifton at 5:00 PM 1 comment:

When Bears — and Deer and Badgers — Wear Fur Coats

M. and I swung through Pueblo last week on a typical supply run and picked up some fur coats — one rabbit, one mink.

They are for the bears. Or the fawns. Or whatever other young animals turn up at the wildlife rehabiltation center west of town later this spring.


To celebrate a new year and a new you, donate fur to Coats for Cubs! From January 2 to April 22 (Earth Day), Buffalo Exchange locations across the country will be collecting real furs in any condition. We then ship them off to wildlife rehabilitators, who use them to create a nurturing environment for injured and orphaned animals.

Our friends at the center here got a deluge of coats this summer. They have always put stuffed toy animals in with some of their orphans, such as foxes. But the furs were better.

In fact, Sanders was amazed how well the animals took to the furs, noting a bond that was formed between the baby mammals and donated items.

“I just couldn’t believe the response from the animals,” she said. “I’ve never seen anything bond with anything like that before. They really love them.”

After that story ran in the Pueblo Chieftain, a new donor got in touch with the center directly, hence our coat-transport.

So if there is an unwanted fur coat in your house, contact Coats for Cubs, which maintains a list of participating wildlife rehabilitation centers around the country.
Posted by Chas S. Clifton at 6:00 AM No comments:

Email ThisBlogThis!Share to TwitterShare to FacebookShare to Pinterest
Labels: wildlife
Newer Posts Older Posts Home
Subscribe to: Posts (Atom)
"The point was no longer to show one's hardihood. The point was to be there."