He probably has not read far enough back in the archive to know this, being relatively new, but this not the first time that HCN has tied itself into knots of political correctness over Western wear.

Back when HCN was published in Lander, Wyo., before Ed and Betsy Marston took it over in the 1980s (as I recall), they published an earnest editorial asking whether  environmental activists in the West could wear snap-button "Western" shirts, for example, lest they unwittingly identify with eee-vul ranchers and other earth-rapers.

The irony there is that "Western wear" as sold on Main Street was formalized by urban tailors after World War Two as costumes for musicians and actors. Even foreigners know this:

In addition, without cowboy hat-wearing, environmentally concerned Wyoming rancher/biologist Tom Bell, who founded High Country News, Briant Calvert would not have his job and editorial pulpit.


Did he think about that before writing how the cowboy hat was "a symbol of power and exclusion"? That it is nothing but a prop to show who is American and who is not? He needs to get out more. Maybe he could meet these guys in the photo at right. They clearly are insufficiently "woke."


The broad-brimmed hat is practical in sunny country, as generations of wearers have known. And if it threatens to blow off, you need a "stampede string," as the old-timers called it.

And they are flattering to almost everyone. You don't have to be Heather Graham. I am sure that my grandfather, who sold Stetson hats in his store, had a whole line of patter about that!

Me, I've got one Stetson "Open Road, " kind of a compromise style, and one no-name low-crowned, pine sap-stained broad-brimmed hat in my cranial wardrobe. I plan to keep wearing both of them. 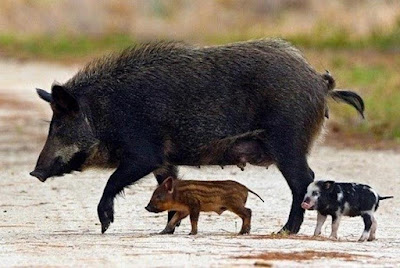 A few weeks ago I wondered about Colorado's wild pig population, but as commenter Ron was the first to point out, there now officially are not wild pigs. Officially.

The partnership formed in the early 2000s as a task force to manage invasive feral swine, which root up crops and pastures causing billions in damage nationwide each year. Feral swine also spread disease to livestock, wildlife and humans. Ground-nesting birds and other wildlife are easy prey for feral swine. And the swine put native wildlife at risk by competing for resources and destroying habitats and ecosystems.

But since wild piggies are mobile and don't read signs, the solution is obvious. Build a Wall and make Texas pay for it.
Posted by Chas S. Clifton at 2:34 PM No comments:

UPDATE, 21 Feb. 2020: Colorado Parks and Wildlife claims to have eradicated all the wild pigs. But did anyone tell their Texas relatives?


At Sports Illustrated, a Texas-centered account of North America's growing wild/feral pig problem and the hunting of same from helicopters by paying customers.


Wild pigs, by all accounts, make entertaining quarry for these sportsmen. They’re smart, elusive and faster than you think—up to 30 mph at a sprint. And that very appeal is, essentially, the root of the whole problem. America’s love of pigs as sport-hunting fodder has sowed a situation it can’t shoot its way out of. And might not want to.

“If they were not fun to hunt, we would not be in the shape we’re in,” says Higginbotham, a beard’s worth of mustache framing his mouth on three sides. “And I term it to be: We’re in a war.”

Up in Saskatchewan, where there are few good flying days, corral-style traps and "Judas pigs" are touted as an answer on agricultural lands. (I think I will start saying that whenever I am annoyed: "Well, Judas pig!")

I do not know if southern Colorado lacks a major pig problem, or if I have just not talked to the right people. So far, I have seen only one alive, in a little riparian area feeling into Pueblo Reservoir. Southeastern Colorado seems to be the place, but this outfitter is on the Western Slope.

Another time, my dog Shelby (the Bandit Queen, we called her) disappeared, and I found her about a mile away along a little gravel road, chewing lumps of fat off a discarded black pig's hide. So somebody got one somewhere. Shelby paid the price that night, vomiting copiously.
Posted by Chas S. Clifton at 4:07 PM 1 comment:

These boys don't care who is watching. Or maybe they want an audience.
Posted by Chas S. Clifton at 3:22 PM No comments:

Email ThisBlogThis!Share to TwitterShare to FacebookShare to Pinterest
Labels: deer, Wet Mtns., winter
Newer Posts Older Posts Home
Subscribe to: Posts (Atom)
"The point was no longer to show one's hardihood. The point was to be there."