Is your smartphone as accurate as a dedicated GPS unit? Some researchers at Skidmore College tried to answer that a few years ago (note reference to iPhone 4). Their conclustion: "The short analysis is that iPhones are still worse than a dedicated GPS, but not that much worse."

I am using an iPhone 5s, so not the newest, but I have noted that its GPS unit is about as good as my Garmin's . . . except that for geocaching, it is not so good, because geocaches are marked in hours/minutes/decimal minutes, and the built-in GPS reads hours/minutes/seconds.

Now there are decided geocaching apps that work fine, but they require a good cellular data feed, and when you are in a place like the Purgatory River canyon, you end up thinking, "What possesed me to leave the Garmin in the truck and bring just the phone?"

Bottom line: a dedicated GPS receiver does more stuff than a smartphone does. Using GPS sucks batteries dead, but it's a lot easier to swap in two more AA's than to carry a cell phone backup power source (although I have one of those too, solar-powered).
Posted by Chas S. Clifton at 3:47 PM 2 comments:

Email ThisBlogThis!Share to TwitterShare to FacebookShare to Pinterest
Labels: geocaching

Where to Eat in San Luis, First Aid, and Other Links

¶ Where to eat in San Luis now that Emma's Hacienda is closed. And there is a new-ish coffee shop and bakery, Rosa Mystica, that I keep meaning to try.

¶ From the National Outdoor Leadership School: "27 Considerations for a Wilderness First Aid Kit." Having taken their wilderness first aid class a couple of times, I think about these things more than I used to, back when my first-aid kit was a few bandaids and a small tin of aspirin.

¶ Why your dog likes bread, oatmeal, and other grain-based foods and can digest them just fine. They learned to do it to live with Neolithic farmers, apparently. They are not wolves.

¶ Instead of just shooting a suspect bear and looking at its stomach contents to see if it ate the missing camper, the National Park Service is learning to use non-lethal DNA evidence.
Posted by Chas S. Clifton at 3:18 PM No comments:

How to Write a Northern Rockies Mystery Novel

After reading a lot of mystery novels by Peter Bowen and Keith McCafferty (Montana) plus Craig Johnson and C. J. Box (Wyoming), I have assembled enough ideas for a decent undergradate paper with a simple compare-and-contrast methology.

Although her novels are set in Wyoming, Margaret Coel lives in Colorado. Still, much of what I will say applies to her works too.

1. The Protagonist. The idea of the "wounded  detective" is common. Fictional dectectives are often divorced, widowed, deeply depressed (especially in Scandanavia), using or recovering from too much booze & drugs, or fired from a job in law-enforcement, among other possibilities. Coel's Catholic mission priest, John O'Malley, a recovering alcoholic, is isolated by both his clerical vocation and his location on the Wind River Reservation.

Often they are marginalized in some respect.  Bowen's Metis brand inspector-deputy sheriff, Gabriel Du Pré, is Métis, descended from the French/indigenous mixed-blood ethnic group who originated around the Great Lakes, but some of whom moved to eastern Montana in the 1860s–70s, before and after the Red River Rebellion. Father O'Malley is a white priest on the reservation, while Box's Joe Pickett is frequently in conflict with his superiors in the Wyoming Game & Fish Department.

The Wind River Reservation's population exceeds 40,000, thinly spread, but you do not feel their presence in the novels. Sean Shanahan, McCafferty's artist-fishing guide amateur detective, pops into Ennis, West Yellowstone, and other towns, but spends more time on the rivers.

3. The "Animal Helper." Although several protagonists often have a dog riding with them, what I mean here is the old folkloric theme of the animal who establishes a special relationship with the hero — for example, the hero is a hunter pursuing a fox, but he spares the fox who then protects him or helps him to secure wealth.

I extend the term "animal helper" to include people who are bonded to the hero somehow yet also appear to be closer to nature — even feral. (The Hollywood equivalent is the Magical Negro, another version of the Noble Savage.)

4. The Plots. Many of these are recognizable from the last thirty years' news. At least two of these authors have used each one of these.
Well, there you have it. Just add more examples and analysis. A guaranteed A-.
Posted by Chas S. Clifton at 1:06 PM No comments:

Last month, I speculated what might happen if hostile government agencies cross-referenced state medical marijuana cardholders with the federal Form 4473, filled out by gun buyers, which contains the question "Are you an unlawful user of, or addicted to, marijuana or any depressant, stimulant, narcotic drug, or any other controlled substance?" (Answering "yes" means no sale, while lying would be a federal offense.)

Since that post, the Bureau of Alcohol, Tobacco, and Firearms has strengthened its position, adding "a new warning statement reminding applicants that marijuana is still considered federally illegal despite state laws allowing medical marijuana or recreational use. In other words: The ATF doesn’t want gun sellers or buyers to mistake the increasingly common state-legal cannabis for the nonexistent federally legal marijuana."

After I wrote, I  had couple people tell me that the same thought keeps them from registering for medical marijuana, even though they have conditions that would qualify them for it.

Others agree that while such a cross-checking is not supposed to happen, it could happen. Somebody in Agency A does a favor for his buddy in Agency B — that is how the world works, especially in law enforcement.

And some other news picked up since then:

¶ President-elect Trump has picked Sen. Jeff Sessions to be attorney general, and whatever else may be said of him, good or bad, Sessions appears to be a hardcore Drug Warrior.


"We need grown-ups in charge in Washington to say marijuana is not the kind of thing that ought to be legalized. It ought not to be minimized, that it's in fact a very real danger," Sessions said during an April Senate hearing.

Trump's pick for the Dept. of Homeland Security, retired Marine General John Kelly, at least makes room for medical use.

¶ While 28 states and the District of Columbia now permit medical and/or recreational cannabis use, the federal government could still swing its hammer at any time and force them to comply with federal law that regards it as illegal. It's just that the political will is not there to do so. Read more about obstacles here.

¶ Even "loose" Colorado may further restrict legal home growers, based on the assumption that they are feeding the "gray market."

¶ Finally — and this is disturbing — the Obama Administration has even cracked down on cannabidiol (CBD), the product used for medical treatment that does not get you high.  The industry reacted:


"Once again, the federal government has shown that it has not caught up with modern science," says Nate Bradley, executive director of the California Cannabis Industry Association. "It's common knowledge that CBD has numerous medical uses, including curbing the effects of epilepsy and reducing muscle inflammation from injuries. To deny that shows a complete disregard for the facts."

I had just bought a bottle of CBD-infused hemp oil by mail from an organic grower in southern Colorado to put on my dry, cracked hands in the winter. But apparently that easy purchase violated "international treaties," and we can't have that. The DEA claims its new move is primarily "administrative." (Nothing to see here, move along.) It's just that shipping CBD oil is now a federal violation unless companies go through a whole new restrictive registration process, right now!

A lawyer whose practice focuses on cannabis commented,


“The sky is not falling; however, this is a very concerning move by the DEA,” [Bob] Hoban said. “What it purports to do is give the DEA control of all cannabinoids as a controlled substance.”

Even if this new code may be rooted in an administrative action to better track research and imports and exports, Hoban said the danger lies in when other federal and state agencies use the drug codes as defining factors of what’s legal and illegal. . . .

“It worries me because the definition of any marijuana-derived products, such as cannabinoids, are not unlawful substances, per se,” he said. “It seems like they’re trying to extend their authority over all cannabinoids.”

Regulators got to regulate, don't you know. Despite the Sessions nomination, it would be highly ironic if Trump's people ended up being less passive-aggressive about cannabis than the Obama Administration. But I am not holding my breath.

That said, if you are purchasing firearms, why stick your head in a noose by being a registered marijuana user, at least until the law changes to reflect public opinion?
Posted by Chas S. Clifton at 1:45 PM No comments:

When you put too many horses on your little acreage, and they eat the grass down to the dirt, at least it is easy to dig hand line around the brush fire that you started by dumping wood ashes during the driest autumn in fifty years, you dummie.

(Why did I wash my brush gear? Did I think the season was over?)

#hobbyranch
Posted by Chas S. Clifton at 9:33 PM No comments: 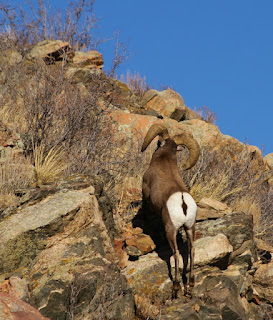 Calculating the GDP is complicated, as the Denver Post article suggests, and it does not say which year's GDP will reflect this change.
Posted by Chas S. Clifton at 2:55 PM No comments:

Email ThisBlogThis!Share to TwitterShare to FacebookShare to Pinterest
Labels: bighorn sheep, Colorado, gear, hunting, Oregon, recreation
Newer Posts Older Posts Home
Subscribe to: Posts (Atom)
"The point was no longer to show one's hardihood. The point was to be there."