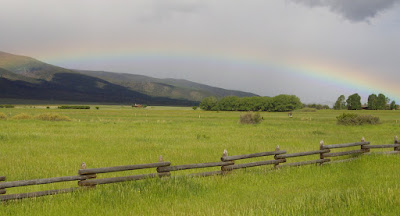 A morning rainbow near Hillside in the Wet Mountain Valley, taken in early June.
Posted by Chas S. Clifton at 9:53 AM No comments:

July rains brought a brief flush of Slippery Jack mushrooms (Suillus americanus) near the house. We don't see them every year; it takes wet weather to bring out the mushrooms in this ponderosa pine-Douglas fir-Gambel oak environment.

I collected a few on morning dog walks for drying— they turn wormy very quickly, and many that look good are not. The flavor is OK, nothing special, but they are mushrooms and picking them fulfills the Hunting and Gathering Imperative.

But someone was watching.

Twice this morning Fisher the dog darted into the oak brush and started munching. He was after the mushrooms — and he does not care if they are dessicated and/or wormy. (We have to keep him away from screens of drying mushrooms at home.)

So this is another one of those dog-behavior conundrums. Does he like mushrooms naturally, or does he like them because they are People Food and hence higher-status than Dog Food?

M. says that he is a dog out of place (but then she says that a lot). If we had truffles, he could have easily been trained to find them.

Given his love for finding dead stuff in the woods, he could have been an outstanding corpse-searching dog too.
Posted by Chas S. Clifton at 11:04 AM 2 comments:

The Pinnacle of Outdoor Fashion Style

At the Frontier Partisans blog, Jim Cornelius suggests that the 1900–1930 period represented the pinnacle of outdoor wear, at least from the standpoint of style.


From safari boots to slouch hat — that’s the way a man oughta dress. Functional and classically stylish. You could walk down the street in 1915 or 2015 and the look is never out of style.

He praises the costumes of the 1985 movie Out of Africa (Robert Redford, Meryl Streep), but his heart is with Martin and Osa Johnson.


Now, Finch-Hatton and Karen Blixen are an interesting couple, “Out of Africa” is a fine book and a beautiful movie. But if you’re looking for an adventurous, stylish couple from the first half of the 20th Century, the go-to pair is without a doubt Martin and Osa Johnson. Way more compelling than Finch-Hatton/Blixen (and I always liked Bror Blixen best anyway).

"But where do I find those clothes today?" you ask.

Go to the Covent Garden area of London — and bring money. There you will find The Vintage Showroom, a vintage-clothing shop-cum-museum "covering the early mid 20th century and specialising in international work, military and sports clothing, classic English tailoring and country wear."  And also some contemporary clothing that invokes those days.

You can see, for example, this bespoke traveling suit, owned by a noted Egyptologist, perfect for crawling through tombs and temples.

Looking for the Gifts of Rain

On the 4th of July, walking in the Sangres, I found two boletes near the trail — and they were already a little past their prime. Then came more rain— five inches (0.25 Egyptian cubits) since Saturday — and further mushrooming was postponed, until last night, when M. and I thought we had a chance. 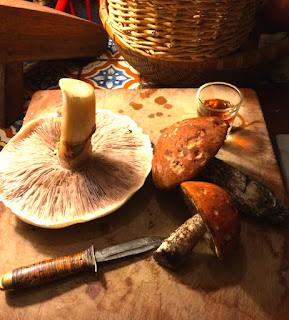 We wanted to check an area in the Wet Mountains that seemed promising for early, lower-altitude foraging, but about half a mile along, it started to pour.

We ended up at the old lodge, watching hummingbirds dart under the eaves while we had coffee and cherry pie.

RIGHT: The large mushroom is Agaricus silvicola,  I think, and if so, not edible.

Twenty years from now, whenever someone says "It's been a rainy spring," the retort will be, "This is nothing compared to 2015."

In one nearby town, the precipitation is at 209 percent of the average year-to-date figure. And the summer monsoon season is just beginning.

A double rainbow formed briefly over the lake, while anglers with inadequate rain gear walked past, heading for their cars or cabins.

Is a Off-the-Shelf Survival Kit the Best Approach? 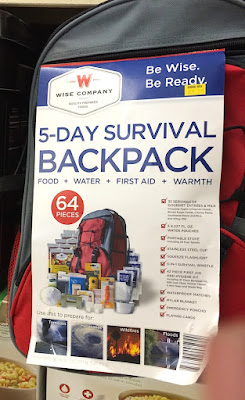 I saw this "5-Day Survival Backpack" on sale in the grocery store in Westcliffe, and my first thought was that someone would buy and it and figure they were ready for an overnight in the Sange de Cristo range, if you count a Mylar blanket as "warmth."

Not enough water though.

Reconsidering, I thought it more likely to be the sort of kit you toss behind the seat of your truck for emergency use. The maker promotes as an "emergency survival kit" as well. It lists at $79.99 but is available online for $50–70.

Could you make someething better for less than $50?
Posted by Chas S. Clifton at 2:52 PM 1 comment:

Only for Weather Nerds

If you live in Wyoming, the Black Hills, Colorado, or western Kansas and Nebraska, the most interesting weather forecast happens online, a service of the Geographical Area Coordinating Centers (now there is a bland and opaque bureaucratic name).

The "Daily Fire Fire Potential Briefing," a short mp4 video, talks a lot about relative humidy and wind but also serves well for forecasting weather in your area or where you plan to be going for outdoor activities.

Admitedly, the narrator sounds like the most boring graduate student teaching assistant that you ever had in college. But the info is solid. (So was the TA's, probably.)
Posted by Chas S. Clifton at 9:16 AM 1 comment:

I have never fished John Martin, but I have tried it for waterfowling with mixed success. When it is high like this, you can find some cover and improvise a blind.

But when it is low,  the best areas are surrounded by a wide margin of boot-sucking mud. I wonder how far down the original bottom is under the the silt that has washed in.

HASTY, Colo. - The wet Colorado spring at John Martin Reservoir has allowed something that hasn’t been seen for quite a while: high water levels.

That means it’s a great time to visit the park. There’s plenty of room for boating in the reservoir that now spans roughly nine miles long and two miles wide. There's also 200-plus campsites and nearly five miles of hiking trails to explore.

"The reservoir hasn't looked like this in a long time," said Park Manager Dan Kirmer. "If you haven't been to the reservoir before or haven't been in awhile, you definitely need to come check it out."

Boat, picnic and fish at this peaceful oasis known for its wildlife. John Martin Reservoir is also considered a birdwatcher's paradise with almost 400 species documented in Bent County.

Beat the crowds and long lines at boat ramps at other reservoirs across the state and enjoy the open water at John Martin Reservoir. While the dock at the east boat ramp had to be closed, boats can still launch and both the east and west boat ramps remain open.

The reservoir is letting in water at a rate of around 3,900 cubic feet per second and is releasing at a rate of about 820 cfs, so the high water levels will remain for a while.

Where Lightning Strikes in Colorado

Now you know why Nikola Tesla built a laboratory in Colorado Springs in 1899, right in the central red patch.

This map was created at the National Weather Service office in Pueblo, Colo., where its page includes links to more maps for the (48) United States (Florida wins!) and the world.

M. and made up our term, the "Pike's Peak Swirl," when thunderstorms would interfere with our old summer job of censusing owls for the Bureau of Land Management in areas south and southeast of Pike's Peak. Or as the Coloado Springs Gazette puts it, "Why Is Pike's Peak a Giant Lightning Rod? Blame Denver. "


Moisture from the south tends to circle around Denver and slam back into the Palmer Divide, combining with heat generated by the Pikes Peak massif and its surrounding peaks, said Steve Hodanish, a meteorologist and lightning specialist with the National Weather Service in Pueblo.

Email ThisBlogThis!Share to TwitterShare to FacebookShare to Pinterest
Labels: Colorado, Colorado Springs, Pueblo, summer, weather
Newer Posts Older Posts Home
Subscribe to: Posts (Atom)
"The point was no longer to show one's hardihood. The point was to be there."