A Wolf in RMNP?

On Dec. 4, experienced park volunteers saw a black canine emerge from the trees at Moraine Park, lift its leg to urinate and then dart away once the animal noticed it had company, said biologist Jeff Conner, a natural resource specialist for Rocky Mountain National Park.

Funny how this happens in the middle of the elk-control controversy. The god of irony rules the universe.

M. and I recently watched This is Nowhere, a film with no particular narrative or point to make.

I suspect that the filmmakers went down to the Wal-Mart in Missoula, Montana, looking for the awful sickening rot at the heart of AmeriKKKa and found -- fairly ordinary, pleasant, middle-class people?

For instance, the widower who tired of rattling around in his big house, sold it, bought a motorhome and who now travels with his cat around the US and Mexico. (He was talking of driving to Costa Rica next.)

Yes, they know that Wal-Mart permits them to camp for free, knowing that they will stroll across the parking lot and spend money. And they don't care.

Unfortunately for the filmmaker Doug Hawes-Davis, his subjects just seem ordinary. Or maybe that fact is supposed to scare you.

One academic reviewer called it "a theater of the absurd acted out in surreal Wal-Mart-scapes and highway strip developments, vehicles and people jiggling in fast motion staccato, going nowhere"? Yeah, whatever.

Another nature-and-culture film that could have been good but took itself too seriously was Darwin's Nightmare.

What does it say when the real ecological issue at the documentary's heart is only shown for a moment in a video that is being watched by some of the people being filmed?

That is taking the idea of a "movie within the movie" too far and too literally. Instead, sensation overcomes information in Darwin's Nightmare

It is still worth seeing, but you will only understand if if you do your research first. That conclusion is no praise for the filmmakers.

Too bad. Both could have been better.

Meanwhile, here is a blog for full-time RV-ers.

Or you can live in a van and be an "independent contractor," like the Hobo Stripper. I wonder how long that lifestyle choice will last. At least she is doing better than Chris McCandless.
Posted by Chas S. Clifton at 5:55 PM No comments:

When the Dog or Cat Goes Missing

The Missing Pets Partnership has assembled pages on what to do to find a missing dog or cat.

(Or ferret. I suppose that there are indeed people who would want to locate their missing pet weasel.)

It's pretty common-sense stuff. The one thing I learned, though, when it comes to looking for a missing dog (particularly in rural areas) is simply to look first upwind. Is there a lovely scent of carrion on the air?

(Hat tip to my sister, Sarah, who is always sending me dog links.)
Posted by Chas S. Clifton at 5:16 PM No comments:

Riders on the Storm

M. and I went to Colorado Springs today for a supplies and Christmas-shopping trip. We left for home on the lip of the snowstorm that was blowing in.

We drove out of the storm -- temporarily -- on Colo. 115. The peaks around Cañon City -- YMCA Mountain, Cooper Mountain -- were side-lit by an artistic solsticial light that picked out every fold and crest.

The area around Penrose and Florence was in a pool of light with grey storm clouds all around. It looked like something from "Lord of the Rings" -- the Light menaced by the surrounding Dark.

Our mountains were grey-capped too. We hustled all our food into the house. M. walked the dogs while I brought arm loads of firewood up onto the porch and filled the bird-feeders.

In the words of our Immortal Leader, "Bring it on."
Posted by Chas S. Clifton at 5:32 PM No comments:

Email ThisBlogThis!Share to TwitterShare to FacebookShare to Pinterest
Labels: weather

Ensure Victory against the Moon Men! 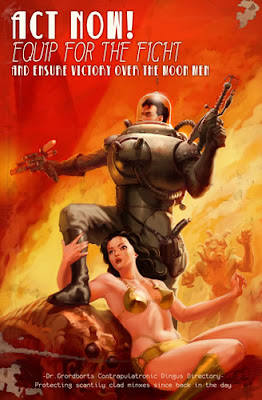 How come none of the gun-bloggers out there ever discuss the 1902a Victorious Mongoose pistol?

It could be just the weapon you need if cornered by Moon Men. The 1902a and other necessary items are here.

Email ThisBlogThis!Share to TwitterShare to FacebookShare to Pinterest
Labels: weirdness 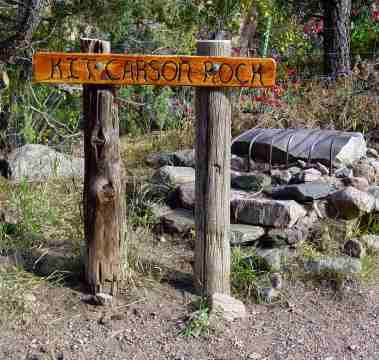 Unmarked for decades, the so-called "Kit Carson Rock" in eastern Custer County, Colorado, has recently sprouted a new sign, part of some locals' attempt to reclaim the past and commemorate things in the uncomplicated way that they used to be commemorated. 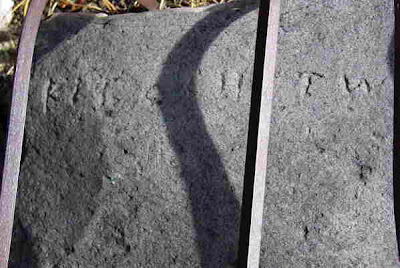 Here is a close-up. If you can read "C. Carson" in there, your eyes are better than mine. But there is no "W" in "Christopher Carson."

Furthermore, Kit Carson could not read or write. He could barely scrawl "C. Carson" on documents when he had to. Illiterate people on hurried cross-country rides from, let's say, Fort Pueblo to Taos do not pull chisels from their saddlebags and start carving during a lunch stop.

I am not a geologist, but that does not look like the rock from that part of Hardscrabble Canyon, where sandstone predominates. Someone could have asked Professor Anderson, but I do not think that anyone bothered to do so.

The legend of the rock has been around for a while, however, even with that problematic "W".

A 1948 Forest Service map of the San Isabel National Forest pictures it too, complete with the protective iron bars. At that time, Colorado Highway 96 ran past it, before the road was re-routed.

Local writer Hal Walter came to the same conclusion: the rock has nothing to do with Carson.

But I suppose some people want to associate a famous name with this area--and Carson certainly might have traveled up Hardscrabble Canyon, one traditional route towards the Sangre de Cristo passes and into the San Luis Valley.

Trying to claim he carved his name, though, is sort of like saying "George Washington slept here."

It is a tightly paced story of the interaction between Carson, the New Mexicans, the Navajos, and the US Army during the 1840s-1860s.

Sides writes without bias of the Navajos' raids on the New Mexican settlements, the Hispanic slave-catching raids against the Indians, and finally of how Carson, who himself had many Native American friends, accepted the task of forcing the Navajos on the "Long Walk" to Bosque Redondo and captivity. An excellent book.

Meanwhile, I will have more to say of the attempt to control the story of the past in Custer County.
Posted by Chas S. Clifton at 7:57 PM 4 comments:

Catching Water off Your Roof 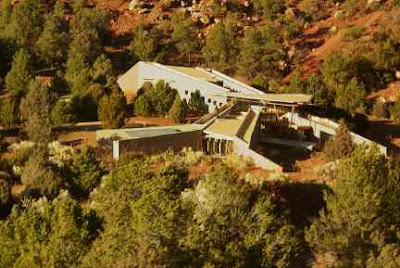 When I saw this house in Apache Canyon near Lamy, New Mexico, from the train last month, my first question was whether the roof was designed to catch water or whether it was just an architect's "concept."

A recent news report on the drought in the Southeast showed Georgians buying rainwater barrels at a garden-supply store. That practice would be technically illegal here in Colorado, where every drop of precipitation is appropriated and over-appropriated.

It not only has to flow down its legally adjudicated drainage, but it cannot be delayed!

Still, I never have heard of anyone prosecuted for catching rainwater. But I have seen board members of the Southeastern Colorado Water Conservancy District (the "secret government") become testy over someone's plans to build a stock pond or little earthen erosion-control dam when they thought that the permitting process had not been followed correctly.

The National Park Service has announced a $6 million plan to deal with Rocky Mountain National Park's overpopulation of elk. They would be killed by "sharpshooters" (contracted through Halliburton, no doubt.)

The lethal reductions, along with fencing and "aversive techniques" such as moving herds with dogs and blank ammunition, are part of a $6 million, 20-year plan to bring down the unnaturally high number of elk in the park and restore native plants.

The plan produced a sharp response today in a news release from the Colorado Division of Wildlife and its governing body, the Colorado Wildlife Commission, through commission chairman Tom Burke.

“Repeatedly, the Colorado Wildlife Commission has said that we are proponents of using qualified citizen volunteers to assist in managing the elk population in Rocky Mountain National Park,” said Burke.

“Culling 100-200 or less elk a year may not have the impact desired on the current population of 3,000 in Rocky Mountain National Park," he said. "The language in the plan falls short of our expectations.”

Why would the NPS, notorious for its maintenance backlog, its low salaries to park rangers, and its other cutbacks, want to spend $6 million when it could have much of the job done for free or nearly so?

I can think of only one reason: The NPS bureaucrats are afraid of the precedent of allowing hunting in the park. And they are probably afraid of some kind of political shit storm--which they may get anyway. The first law of bureaucracy is Cover Your Ass, and never mind the poor rangers living in leaky trailers.
Posted by Chas S. Clifton at 3:09 PM 2 comments:

Blog Stew with "Roots of Two or Three Kinds"

What can be gleaned from Cabeza de Vaca’s accounts of lifeways in greater South Texas at the dawn of written history in North America contributes significantly toward explaining archeological records in the same regions since the extinction of mammoths and other Pleistocene megafauna.

¶ Photo tour: The Seven Creepiest Places in the World.

¶ A map of UFO hotspots. Southern Colorado is well-represented. But what's with the U.P.?

¶ Mammoths blased with meteorites. Hah, that's what They want us to think. It was cluster bombs from alien space war.
Posted by Chas S. Clifton at 12:10 PM No comments:

Relics of the Old Ones 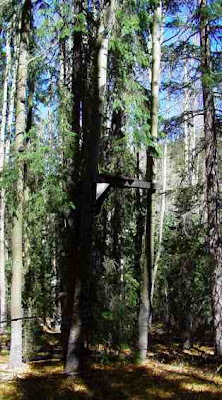 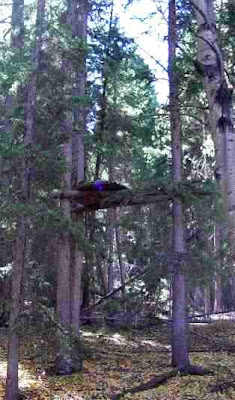 You are walking in the Wet Mountains, and you look up. There it is--just a hunter's tree stand where someone once watched for bear or elk. But the wood has aged into grey and the lichen has grown on it, and it looks like a relic of a former tribe--a burial platform or a shrine, perhaps. Something out of Dersu Uzla.

And then you chastise yourself for seeing the woods through books and film instead of as they are, and you shift your rifle to the other hand and keep climbing toward the unseen ridge.
Posted by Chas S. Clifton at 8:39 PM No comments:

Email ThisBlogThis!Share to TwitterShare to FacebookShare to Pinterest
Labels: Colorado, Wet Mtns.
Newer Posts Older Posts Home
Subscribe to: Posts (Atom)
"The point was no longer to show one's hardihood. The point was to be there."