Attacked on the Trail by a Mountain Lion (3)

Part 1 here
Part 2 here
My first face-to-face with a mountain lion (two of them, actually) came during my student days when I worked a few times as a camp hand/assistant cook for a small hunting outfitting concern in Westcliffe, Colorado.

During a spring bear/turkey hunt (spring bear hunting in Colorado ended in the early 1990s), the guides decided to provide some after-supper entertainment.

They took the clients (two or three men) and me down into a side canyon of Grape Creek, and Guide 2 showed us how to wail on a mouth-blown predator call. Then he shined his red spotlight across the drainage and there sat two lions — youngsters traveling together, we suspected.

They watched us. We watched them. We were ready to leave, but there they were. Finally a guide pulled out his .44 Magnum revolver and fired a couple of shots over their heads.

We started walking back up a rocky path to our vehicles. The guide cast his red light back and forth behind us, but it kept getting dimmer and dimmer. Later, he claimed he had controlled that dimming with a rheostat. I suspect that his batteries were just worn out.

It was dramatic though. By the time we had the clients back to the nearby cabin, one of them, a lieutenant in a Southern California police department who had told us tales of his urban exploits, was about ready to jump out of his skin.

Me, I went out and bought a red spotlight with rechargeable battery and some predator calls. Now and again I like to see what's out there. And of course there are the scout cameras.


Join local wildlife videographer and conservationist David Neils for a deep dive on the habits and habitat of mountain lions in Northern Colorado. You'll learn how to map the hunting and travel routes of these apex predators using four natural factors to view the landscape like a mountain lion, and capture weekly video of these elusive predators.

The Cult of "Ute Prayer Trees"

Finally, a take-down of the whole "Ute Prayer Tree" legend that has been getting too much of a hearing up and down Colorado, particularly in the Ute Pass area (west of Colorado Springs, e.g., Woodland Park, Divide, etc.)

"Bent Trees Part 1: Pseudo-archaeologies" was published last week on the What's Up, Archaeology? group blog. The author, Holly Kathryn Norton, is the Colorado State Archaeologist, and this is only Part 1 of her fisking of this contemporary "old Indian legend."

As you walk through a forest in Colorado, or anywhere else, really, there are trees that have not grown straight. In Colorado, particularly in the Pike’s Peak region of the Front Range, a contemporary mythology has grown around these trees. The myth takes many forms but the foundational logic is that these trees were purposely bent by the Ute Tribe, and the name given to the trees hints at why proponents of the practice think the Ute bent the trees- Prayer trees, burial trees, spirit trees, grandfather trees, marker trees, vortex trees, trail trees. The names change as the loosely formulated hypothesis are challenged by both professional archaeologists and the Ute themselves.

A little basic forestry combined with knowledge of history disproves a lot of it. I have made this same challenge to "prayer tree" proponents: Take a forester's increment borer, pull a core, and count the rings. Any ponderosa pine tree "modified" by the Utes on the Eastern Slope of Colorado ought to be at least 150 years old. If it's only 70 years old, then forget it. And if you know pine trees, you will know that many of the trees so described are far too young to have been modified by old-time Ute people.


There have also been serious questions about the age of individual trees that have been identified as “Ute Trees.” Core samples taken a couple of years ago on a tree that was identified as a “prayer tree” aged the tree to 67 years old, well after the Utes were forcibly removed from the Front Range to reservations in the Southwestern part of the state, nearly 8 hours away by modern car travel. I was personally told that this age is not accurate because “bending trees causes the DNA in a tree to change, so modern dendrochronology no longer works for aging a tree.” These kinds of arguments are just false, but no amount of fact-checking can refute such a blatant disbelief in scientific information.

And yet . . . and yet . . . this desire to see Ute Prayer Trees (or for some people, trees modified by Bigfoot) is what people have always done, seeing the spiritual side of nature and trying to put a name and face on it, whether it's dryads or Druids or you name it.
Posted by Chas S. Clifton at 3:44 PM 4 comments:

Attacked on the Trail by a Mountain Lion (2)


Here is Travis Kauffman, who recently fought off and killed a mountain lion that attacked him while trail-running in the foothills west of Fort Collins, Colorado.

The size of the lion, once announced as 80 pounds, has now shrunk to 40–50 pounds. A yearling, probably.

Gossip abounds. For instance, one source pretty well plugged into the state's mountain lion network (of humans, that is), claimed that he actually was shooting a video of the lion when it attacked him. That is why the attack came from the front, she said.

True, when hunting deer, lions generally attack from the side or year and bite the prey's windpipe. This lion, probably young and inexperienced, fastened onto Kauffman's wrist.

But given that he outweighed it by 100 pounds and was angry to boot, you can see how he could subdue and kill it, although he got some significant lacerations that will leave him with some scars.

(Unrelated: Travis is purely American name, as Nigel is British/West Indian. Do all Travises have Texas roots, a memory of the ill-fated William B. Travis at the Alamo?)
Posted by Chas S. Clifton at 7:38 PM 1 comment:

Filmed in the southern Rockies, the Wet Mountain Valley to be exact.
Posted by Chas S. Clifton at 9:35 AM No comments:

Motherless Cub Gets Another Chance 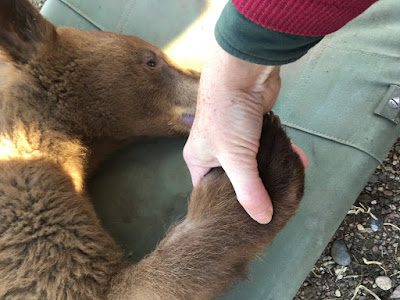 Goodbye, little bear. Your luck has been good until now. I hope that it holds.

You and your litter mate were found in central Colorado Springs last summer, victims of some unfortunate events. Lucky for you, the game wardens caught you both, and you were taken into the rehab center.

There you ate and played with your two new cage mates, and you ate some more. All that fish and fruit and grass and Walmart avocados by the carton.

Today they came and shot you with a dart gun. After a while you fell asleep, were weighed (110 pounds / 50 kg), given one last anti-worm shot, and loaded with your sister into a wooden crate.

By now, you two should be bedded down inside that crate, which is filled with straw and covered over with straw and snow to serve as a bear den for the rest of winter. You are on a big ranch in the Wet Mountains, away from the highway, behind locked gates.

The cattle have been moved to lower elevations, so even the ranch hands will not be around much. It should be nice and quiet.

When you feel like getting up, you won't have Mom to follow after. You will be on your own. Look out for each other. Keep a low profile. Watch out for bigger bears. Stay away from the houses. Eat and eat and eat. You have a pretty good chance of survival.

(When I see those ranch hands next summer, I will ask them if they have seen you two. If they say that they have not, that might be a good thing. On the other hand, I want to know . . .  )
Posted by Chas S. Clifton at 4:02 PM No comments:

Attacked on the Trail by a Mountain Lion (1)


Screens all over America, even at political websites, lit up yesterday with the news of a trail runner attacked by a mountain lion west of Fort Collins.

Colorado Parks and Wildlife kicked off the story with a news release on Monday, February 4th, reading in part:


LARIMER COUNTY, CO -- Colorado Parks and Wildlife is actively investigating a reported wild cat attack on a trail runner at Horsetooth Mountain Park on Monday afternoon, Feb 4. The victim survived the attack and is currently undergoing medical treatment at a local hospital.

The man was trail running on West Ridge Trail on Horsetooth Mountain Park property when he was attacked from behind by a large cat. The cat bit his face and wrist; the victim suffered facial lacerations, wrist injuries and scratches and puncture wounds to his arms, legs and back.

Subsequent news stories explained how the thirty-something runner not only fought off the cat but but choked it to death.


The man picked up a rock with his free hand and pounded the cat in the head, but the animal hung on. He then put the lion in a headlock and wrestled and scrapped with the creature on the trail.

When he finally managed to free his wrist from the cat’s jaws, the runner counterattacked. He jumped on the mountain lion’s back, and, using his hands, arms and feet, he choked the animal to death, she said.

His Paleolithic great-nth grand-daddy would have been proud.

In one well-known case, a woman running alone was killed in 1994 on a trail near Auburn, California, which makes a chapter in Jordan Fisher Smith's 2005 memoir  Nature Noir: A Park Ranger's Patrol in the Sierra. On the other hand, three years ago a Pitkin County, Colorado, woman fought off a lion who had her 5-year-old's head in its mouth, so she gets the Paleo Prize too.

Coloradans also remember the high school cross-country runner attacked in Idaho Springs in 1991 on a practice run near his school,  not to mention a 10-year-old killed in 1999 in Rocky Mountain National Park and the mystery of 3-year-old Jaryd Atadero, who disappeared on a group hike. His unsolved death is often attributed to a mountain lion, but some argue that he might have been snatched by an eagle. (There is a book about his disappearance too.)

Yet — and this is important — when you read this list of fatal attacks in North America, which begins in 1890, you will notice how many of them were on children. Of the adults, a majority seemed to have been alone and moving — running, skiing, hiking. One mountain biker was attacked while bent over fixing the chain on his bicycle, apparently.

Now is when I could segue into telling my own stories of being stalked by mountain lions — one time in particular got sort of Paleo — but I think I will save it for a follow-up post. Check back in a couple of days.
Posted by Chas S. Clifton at 2:09 PM No comments:

Email ThisBlogThis!Share to TwitterShare to FacebookShare to Pinterest
Labels: Colorado, Colorado Parks and Wildlife, death, mountain lions
Newer Posts Older Posts Home
Subscribe to: Posts (Atom)
"The point was no longer to show one's hardihood. The point was to be there."