At his Hits and Misses blog, Gerard Cox discusses another study of deer vision and human camouflage:

"Within this blurry focus, however, some colors are better perceived than others.lue, violet, and near ultraviolet light are seen more clearly by [whitetail] deer than other colors. Near sunrise and sunset, blue and UV makes up much of the light available, and that's what deer see better than other colors. So keep those jeans at home, boy."

And if you say that you have shot plenty of deer and elk while wearing blue jeans, well, I have done that too — from a distance.

At left, a photo from an old experiment of shooting pictures of hunting clothes in B&W to try to simulate deer vision. The model's camo sweater is black/blaze orange, and shortly after this time, Colorado changed its regs to forbid blaze orange camouflage — you had to have a solid color. He is wearing blue jeans.

As I understand, this is all about color-blindness in men, not about deer or elk. If a man is color blind, he can still see the blaze orange as a light color, even better than he could see "safety green," which is right in the center of the human visual spectrum.

For a time in my early twenties I sold menswear in a department store, and I was surprised how often a customer would select a shirt, for instance, and then say, "I'm color-blind, so could you pick out a tie to go with this shirt for me?"

Yet some say that color-blindness has evolutionary value, giving those men affected a sort of predator-type vision, an ability to spot movement against jumbled backgrounds.

• "Behavioral measure of the light-adapted visual sensitivity of white-tailed deer" (abstract only).

• Kamouflage.net, another compendium of military camouflage from around the world.

• A history of digital camouflage development, focused on the United States and Canada.
Posted by Chas S. Clifton at 12:23 PM 2 comments:

Colorado Parks & Wildlife officers releasing a bear into the wild at an undisclosed location.

When you hear the woman's voice say that this bear has not run that far in six months, that is because she (the bear) had been in a large cage all summer and fall. And if she looks a little chunky, that is a Good Thing, since she is on her own to find a den site for the winter.

I will let the wildlife rehabilitator tell the story.


Members of the Bear Aware program were with the game warden that came to her rescue. Bear Aware volunteers educate the public on how to live with bears without conflict.

They gave her the name Fortuna because she was fortunate enough to get the attention she needed. Close inspection could not find any breaks or serious injuries to the leg. She weighed only 40 pounds [18 kg].

Within a week Fortuna was no longer limping and eating everything put in front of her. As time went by her thin body began to blossom into a gorgeous healthy bear.

Her diet consisted of dry dog chow drenched in yogurt and honey with sides of grapes, apples, plums, avocados, watermelon and a variety of other fruits and vegetables and peanuts, lots of peanuts. Natural foods, such as wild plums, juniper berries and chokecherry, were offered when available.

Fortuna did not like when I went into her enclosure. She would run to the opposite side, climb up her log and turn her back on me. Occasionally she would turn her head to see if I was still there. As soon as I closed the gate to leave she would race over to the feast that I left for her. Her aversion to me was just exactly what it should be. I avoided her and she avoided me.

With the hot summer temperatures Fortuna, like all bears that I have had, spent a lot of time in her water tub. She made a large nest in one corner lined with pine needles and oak leaves.

As the days began to shorten and the temperatures dropped, Fortuna became restless. Her instincts were telling her that she needed more than a pine needle nest for the coming winter.

Fortuna was given her freedom in late November in a remote mountain area. Her weight at release time was 170 pounds [77 kg]. Her coat was shiny black and thick. She would have plenty of fat and a warm coat to survive the long winter ahead.

I know this is the time of year when you are overwhelmed with requests for charitable contributions, but let me put in a good word for Wet Mountain Wildlife Rehabilitators.
Posted by Chas S. Clifton at 9:00 AM No comments:

M. sent me this link with a comment, "So why does Fisher seem to like it when you bonk him on the head?"

Simple. Fisher Is Not Like Other Dogs. Or as the neighbor says, "He was made on a Monday."

Your doggage may vary.
Posted by Chas S. Clifton at 10:00 AM No comments:

Early December Snowpack in the West 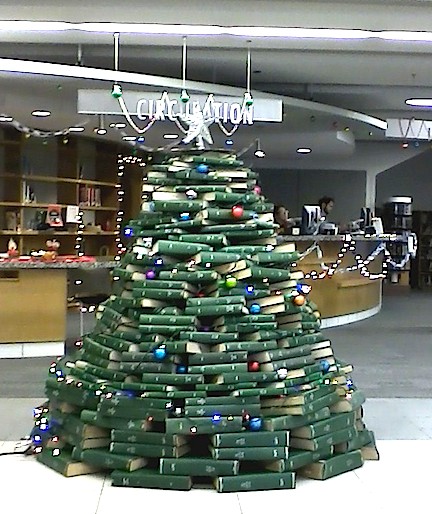 What do you do with bound academic journals? Turn them into a tree  — at the Colorado State University-Pueblo library.

Tumbleweeds blanketed southeastern Colorado the last couple of years, and the La Junta Tribune-Democrat featured local merchants' tumbleweed Christmas tree. Next year's will be bigger!
Posted by Chas S. Clifton at 11:13 AM No comments:

What U.S. CIty Has the Least Predictable Weather?

How many places have I visited where someone said, "If you don't like the weather here, just wait a while"?

Where is that statement truest? Rapid City, South Dakota.

So say Nate Silver, statistician and predictor of sporting events and elections, and his associate Reuben Fischer-Baum.

Among large metropolitan areas, it's Kansas City.
Posted by Chas S. Clifton at 8:45 AM 2 comments: I spent the afternoon in Salida at what was essentially a 500-person pep rally for the proposed Brown's Canyon National Monument in Chaffee County.

With me was fellow Backcountry Hunters  & Anglers member Paul Vertrees.

Like a few others, this "monument" would not involve the National Park Service but be managed by the agencies currently involved: the U.S. Forest Service, Bureau of Land Management (BLM), and Colorado Parks and Wildlife (CPW).

There are two stories here. One is political theatre and process, and one is about changes in conservation rhetoric.

1. Wilderness protection and national monument designation proposals for this stretch of the Arkansas River, where it runs through mostly public land away from any highways and railroads, have been floating around since the 1980s, at least.

Then came the 2014 elections. Udall, much to his surprise (I am guessing), lost his seat. Given Congress's preoccupations, his bill's chances don't look good, despite support from most of the Colorado delegation.

Hence Plan B: Have the president designate the national monument under the Teddy Roosevelt-era Antiquities Act. Such designation would be legal, constitutional, and has been upheld by the courts.

To make the case for that, Udall roped in our other senator, Michael Bennett, plus the chief of the U.S. Forest Service and the assistant directors of the BLM and the Colorado Department of Natural Resources.

They sat at a long table while listening to hours of testimony from local governments (the towns of Salida and Buena Vista, plus Chaffee and Saguache counties), business owners, conservationists, rafters, hunters, etc., 99.5 percent of whom said executive designation would be a Good Thing. Which brings me to . . . .

2. Last year I briefly mentioned the new "veterans for wilderness" movement, as shown in this Wilderness Society article, "Veterans want to protect the public lands that help them heal." We heard testimony from, for example, the Veterans Expeditions group, which takes vets rafting and camping in the canyon.

This year they were jointed by T-shirted members and former members of a group called (if I have it right) Hispanic Access Foundation, which takes kids from metro Denver on outdoor trips, including rafting Brown's Canyon.

Who could argue with that? Well, possibly the staffer from Rep. Doug Lamborn (R-Colorado Springs), who claimed that an executive proclamation would be a "top-down" action foisted on an unknowing population.

Let's see, I attended my first public hearing on this matter in Buena Vista when Senator Ken Salazar hosted it, and he left office in 2009 . . . and that was just one of several.

I hope that what he heard from local government and business types, in particular, might persuade him otherwise, but you never know.

Meantime, we await the judgment of our performance from the critics who matter.
Posted by Chas S. Clifton at 9:30 PM No comments:

Email ThisBlogThis!Share to TwitterShare to FacebookShare to Pinterest
Labels: Arkansas River, BLM, Chaffee County, Colorado, Colorado Parks and Wildlife, Forest Service, wilderness
Newer Posts Older Posts Home
Subscribe to: Posts (Atom)
"The point was no longer to show one's hardihood. The point was to be there."