Links Taller than Your Head

Links. Do I have links. They sprout like sunflowers on the prairie.

• How to improve your outdoor photography. 10-2-4 is not about Dr. Pepper — 2 p.m. is when you are traveling to the place that you wish to photograph after 4 p.m. And "Zoom with your feet" does not apply to buffalo.

• Predatory ducks. It's Romania, so maybe they suck blood as well.

• How older elk survive to a ripe old age (for elk).  They learn the difference between bowhunters and rifle hunters.

• A poacher goes down hard. If only this happened more often.

• Another article on bold, aggressive urban coyotes. Denver, this time.

• High country trails don't just happen. It takes people like this.
Posted by Chas S. Clifton at 9:26 PM No comments:

So out of loyalty to this fine breed, I give you this story of a long-lost elderly dog who survived:

"The last [the dog's owners" had heard, a hunter in Jerusalem Valley had seen a brown dog in the forest, running from wolves.

"The past year’s hard winter would’ve been tough to survive in the wild, even for an animal in its prime, Glankler said. The dog she had rescued, though a hardy Chessie (a dog known for its wooly, oily coat that was bred for the extreme cold of retrieving in the Atlantic), was completely deaf and clearly pretty old. Glankler couldn’t be completely sure this dog was Mo."

M. and I were in Pueblo today, and someone tipped off one of the game wardens, who called me to say that she was going out to the Transportation Technology Center (where the levitating ghost train once ran) to pick up an orphan fawn — and could we relay it to the rehabilitators who live near us?

Oh sure. We had to hang around for an hour at the public library, which was torture, until she and a state wildlife biologist pulled up in her shiny black Colorado Parks and Wildlife truck.

When they handed over the crated fawn, they mentioned that it had a lot of ticks in its ear. And when we unloaded it, we saw them, like a bunch of grapes.

C., the rehabber, said she would enjoy popping them and killing them. She has a macabre sense of humor sometimes.

It can be worse. This page, from an organization devoted to creating perfect private habitat for whitetail deer, has some gruesome pictures under the heading "Can Ticks Kill Fawns?"

Herter wrote with no regard for the norms and niceties of "sporting literature," just saying whatever was on his mind. Dare I say it, he was the Donald Trump of hunting writers.

He frequently mentions ticks, as in the number of them found on African game animals. In The Truth about Hunting in Today's Africa: And How to Go on Safari for $690.00

(1963), a book that now feels as distant as anything by Hemingway or Robert Ruark, he notes,


A really large rhino with a trophy size front horn of 30 inches of more [sic] is now [c.1960] impossible to get. Tick birds feed off of ticks that inhabit rhinos and also off from the blood that continually uses out of the scars on their skins. By watching for tick birds you can often locate a rhino. The tick birds, however, warn the rhino of your approach.

And also this exchange:


Jacques walked to the rear of the rhino and lifted its tail. Its anus was ringed with huge ticks a half inch in diameter.

"Every time I shoot one of these pigs I can't help feeling sorry for it. How would like to go around all your life with ticks like that around your anus?"

Show me another safari/hunting writer who discusses rhino ticks. Not "unhinged" as the New York Times described him, but just untroubled by the niceties of sporting lit.

UPDATE: The fawn died four days later. Tick-infested fawns are often "compromised," the rehabbers  said, which fits with the article that I linked to.
Posted by Chas S. Clifton at 8:12 PM 3 comments:

Florence, Colorado, has joined the trend towards "wet" parades. The parade route is divided into two halves: all units move through the dry half first, and then at an intersection, those who do not wish to continue—such as units with lots of bunting and young children—peel off.
As we frequently do, our little fire department contributed a unit to the parade — and a unit to another parade in another small town. For the second year running, I drove in Florence.
The wet half of the parade is a water battle between spectators and parade units. The former have all manner of squirting apparatus plus garden hoses hooked to spigots on buildings. The latter have open tanks of water, buckets, and squirt guns — plus some of us have fire engines.
In our case, the fire engine is a brush truck (small wildland engine) with a gasoline-powered pump. (Most large fire pumpers run their pumps off the engine, which means that the vehicle must be stationery to pump.) We restrict ourselves to one-inch hoses, two of them. Our complement included the oldest firefighter, a retired Navy pilot who loves this stuff, and the chief with his wife and three children.
Me, I just rolled up the windows and drove toward what I knew was coming — the downward blast from one Florence's aerial nozle.
I noticed this year a couple of purpose-built wet-parade units, like this one below. Also, this "Murica" thing is becoming meme-ish. Who started it? 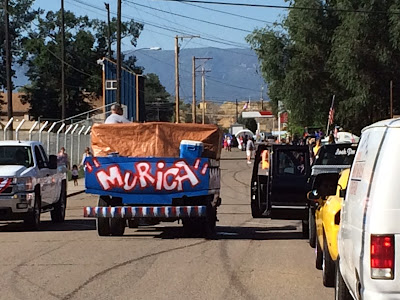 In the end, what makes a parade (along with high-school bands) is somebody riding something. I asked the two riders on the saddle longhorns if I could take their picture. They agreed, and said that they had been in the parade the last two years as well. "That's the trouble," I said. "When you're in the parade, you can't see the parade." 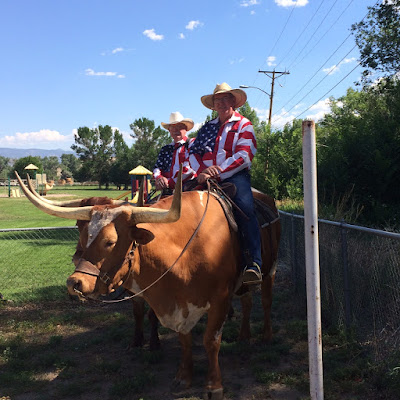 While we were waiting, the oldest firefighter remarked on the incongruity of devoting a parade to spraying water in an arid state.

"Maybe we're celebrating Florence's senior water rights," I said. "They go back to the 1860s, I think."

From The Life of an Ordinary Woman


When anyone fell sick, the first medicine was whiskey, then came quinine and camphor (this camphor prepared at home from the gum and whiskey); then turpentine. One was pretty far gone when one or all of these did not bring him out of it! There was also a good deal of virtue in a chew of tobacco bound on a sore place. I have had many a chew on a cracked toe. Fresh cow manure was also considered good for this, leaving such a white place! For babies with bowel trouble Mama [a "born doctor"] fixed brown flour of which I would steal nibbles, and if this did not help, rose-root tea would, and I would be the one to dig the roots. She was always brewing sage* tea for some tenderfoot, who was getting "climated." Then there was Oregon grape root, brewed with rock candy, supposed to be fine for the kidneys, when juniper and a lot of whiskey were added to it. I have known men in Denver to send to us for the roots, supplying their own whiskey.

Compared to the "Little House" books, Anne Ellis's memoir of childhood and marriages in Colorado mining towns of the 1880s and 1890s (among others, Querida, Bonanza, Coal Creek, and Victor), is relatively un-prettified.  Daughter and wife of hard-rock miners, she grows up accustomed to swings between good times and bad, mixed with sudden moves to some other place which everyone knows will be a "sure thing."

Its publication in 1929 meant that it could not be completely unvarnished, but you do pick up some of the slang of the times. When the young miners from Bonanza went to Salida to "get their teeth fixed," the operations took place after dark at a house on Front Street and did not involve dentistry.

This book had a sequel, Plain Anne Ellis

, which I might have to find. (Martha Quillen at Colorado Central reviewed her third and final memoir, Sunshine Preferred and liked it less.)

* I assume this was Artemisia, not Salvia.
Posted by Chas S. Clifton at 2:00 PM No comments:

An Alaskan Speaks about Bear Spray

A spate of incidents in Alaska (and the Northern Rockies) have some people asking, "Does bear spray work?"

Alaska news-blogger Craig Medred has posted on this repeatedly. The main issue seems to be that minority of black bears (not griz) who turn predator, but grizzlies are always of concern as well.


Twenty-seven-year-old Erin Johnson from Anchorage died June 19 after she and a coworker were attacked by a predatory black bear while doing environmental studies in brushy forest about five miles from the state’s largest underground gold mine. . .

Sean Farley, a bear researcher and wildlife physiologist with the Alaska Department of Fish and Game, emphasized that bear spray has proven hugely effective on charging bears, especially charging grizzlies.

But he noted the physical state of those bears. They charge with eyes wide open, nostrils flaring and often huffing air into their lungs. They are fully exposed to the active ingredient in the spray – oleoresin capsicum, an oily extract from the pepper plant.
Unlike tear gas, which appears to work poorly on bears, capsicum causes more than just irritation to the eyes. Inhaled, it inflames airways making it temporarily harder to breathe and from what is known about research on humans, it might do even more than that.

A charging grizzly is likely to get a big dose of capsicum. That is not necessarily the case for a predatory bear. . . . Farley describes predatory bears as approaching with eyes squinting, mouths shut and  nostrils narrowed. They come in like bears approaching beehives ready to suffer a bit to get the food they want. Their physical preparations would serve to minimize the dose of spray hitting the bear.

The post goes on to talk about risk-assessment: "Statistically, you are orders of magnitude more likely to die in a motor vehicle or boating accident in Alaska than to be attacked by a bear, let alone killed by one." But fear of bears is more primal than fear of motorboats.

And there is speculation on the changing nature of predators world-wide. Read it all.

The big about bears approaching beehives reminded me of when my late brother-in-law was raising hogs on his farm in southeastern Missouri. His was a small operation, maybe a dozen or so at a time, partly for the family and partly for sale.

He told me about one particular hog that would bust through an electric fence. The pig knew that it would get shocked, so it started squealing before it hit the fence, but it still wanted to break through more than it did not want to be shocked. There is no reason why some bear might not take the same attitude toward bear spray.

I still carry it at appropriate times, however. It also works well on overly aggressive dogs. And I see that Medred still carries it too.
Posted by Chas S. Clifton at 9:41 AM No comments:

Email ThisBlogThis!Share to TwitterShare to FacebookShare to Pinterest
Labels: Alaska, bears, Montana
Newer Posts Older Posts Home
Subscribe to: Posts (Atom)
"The point was no longer to show one's hardihood. The point was to be there."