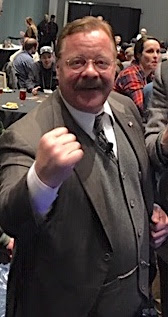 Colonel Theodore Roosevelt — he prefers that title to "President" now that he is out of office —stopped by the annual meeting of the Colorado chapter of the Wildlife Society down in Pueblo last night.

(Backcountry Hunters and Anglers was one of the sponsors, so I was there as a BHA member.)

The former chief executive was in fine form, telling jokes, recounting tales of using his powers to preserve millions of acres into national parks and monuments while also, with Gifford Pinchot and others, creating the national forest system.

And telling jokes about his hapless handpicked successor, William Taft.

He capped the evening  by giving away a "Teddy's Bear" to the youngest member of the crowd, demonstrating that he retained a politician's knack for handling babies.

Why Do We Want to Feed Birds, and Does It Help Them?


At first, it was pretty much a casual, do-it-yourself activity—tossing out food scraps or leftover grain. Bird feeding at the scale we see now didn’t really take off until the early 1980s when it became possible to go into a pet food or hardware store and buy all these specialized items for feeding wild birds. It was primarily the [cage bird industry starting to] sell to people to feed to wild birds.

Why do people feel so deeply about feeding birds?

Jones: That’s probably the most fascinating [question] of all—it’s so much more complex than I ever imagined. A lot of people feel that we humans have done so much damage to the environment and therefore to birds, that they want to give something back—which is a pretty serious, profound activity. Others just really want to learn about birds and feeding brings them up close. And that leads to this whole area where interacting with nature can lead to increased psychological, physical, and spiritual well-being. If that’s the case, bird feeding is one of the most intimate, immediate kinds of interaction with nature that you can have.

It's Tuesday, So It's Bears-day

I did not sleep well last night because I knew that I was getting up earlier than usual.

Wash, dress, walk and feed the dog, fill a go-cup with coffee, and be on the road to the wildlife rehabilitation center.

The game wardens were already there, four of them: two men, two women, all from the Colorado Springs area.  They had already started "darting" the bears — two them lay sleeping in a corner of their enclosure, while one hung woozily from the chain-link wall.

My job as a Colorado Parks & Wildlife wildlife-transport volunteer was just that: transport. In this case, I was a bear-stretcher bearer. Once a knocked-out bear was on the stretcher, one of wardens and I carried it to a hanging scale, where it was weighed (less 15 lbs. for the stretcher and webbing). Then it was out across the snow to a waiting culvert-trap, now repurposed as a transport trailer.

Two trailers, four yearling bears in each, butt to butt, so that they would not accidentally roll onto each other's muzzles and cut off breathing.

Then, after two hours (that's 15 minutes per bear, pretty good teamwork), the two rigs left the property, headed north to somewhere in El Paso or Teller counties. (Exact location of the artificial dens is confidential, of course.)

When bears are released in summer, they are given a wake-up drug first, so that they, literally, hit the ground running.

In the winter, however, they are hauled on sleds to the man-made dens, four yearlings to a den, and left there, still tranquilized, to wake up later among familiar scents.

To see those dens, view the photos with Jennifer Brown's article in The Colorado Sun.  That"180 acres" is wacky wrong though. The wildlife rehabilitation center is much, much smaller.

Weighing between 110 and 160 pounds (50–73 kg) , the seven males and one female are roly-poly fat, thanks to massive donations of fruits and vegetables from the Cañon City Walmart, fish from CPW, and meat donated by big-game hunters. Trying to grab hold of one is like grabbing Jello.

All the while, photos are being emailed to a CPW public relations guy, and the TV station crews will be waiting near the release site.

Six more bears remain to be released in the near future.

Most of these bears were orphaned last year when their mothers were killed, either by vehicular collision or by a game warden when the mother had repeatedly broken into homes, looking for food.

The wardens know that they have to make that difficult decision sometimes, but they don't like it. As one of them said today, "This is our chance to show that we don't always kill bears."
Posted by Chas S. Clifton at 8:18 PM No comments:

Back When the VW Bug Was an Off-road Vehicle 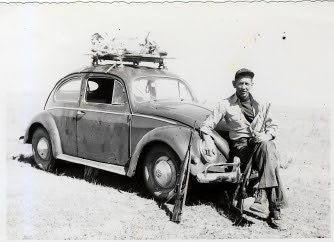 In 1956, if you owned a Type I Volkswagen Bug in South Dakota, you had yourself an off-road vehicle.

Here is Dad's VW with evidence of a successful antelope hunt on the roof rack and his friend Harry Linde (owner of a sawmill near Keystone, S. D.) posing with their rifles.

There were also stories about chasing jackrabbits in that car . . .

But don't go chasing across the prairie/steppe in an old VW Bug today: get a replica Kübelwagen T-82.
Posted by Chas S. Clifton at 6:30 PM No comments:

Where Are the Dogs of Yesteryear?

"Mais où sont les neiges d'antan?" asked the medieval French poet François Villon. Usually that is Englished as "Where are the snows of yesteryear?"

And where are the dogs of yesteyear?

An article about how to stack firewood, and it's fine, but number 4 made me laugh.

Think forest fire and keeping fuel away from the house, not termites.

Actually, I hardly have a woodpile right now, and that is nothing to brag about. The early snows caught me off-guard, and I have been the Grasshopper, not the Ant, ever since. I go out on nice days and cut some rounds from this big, beetle-killed pine trunk near the house, wheelbarrow them home, and then split them.

Next summer, I need to be more the Ant.

There are, in fact, more ways to stack firewood, and you can find them by skimming back issues of Mother Earth News or, I am told, by visiting Norway.
Posted by Chas S. Clifton at 10:02 AM No comments:

Two days ago I bumped in a small flock of Merriam's wild turkeys in a residential area of eastern Custer County. Mixed in with the normally colored birds were two light ones — not true albinos, but definitely whiter than normal.

It turns out that these turkeys are called "smoke phase" or sometimes "smokey gray." You might wonder if their wild parents mated with a domestic bird, but not so, says this Minnesota outdoor writer.


"The partially white or smoke-phase turkeys occur naturally," said Tom Glines, Minnesota's senior regional director for the National Wild Turkey Federation. "The white or gray feathers are black-tipped and the birds are beautiful."

There has been some concern that landowners have released pen-raised turkeys into the wild -- a practice that is illegal without a permit -- and that some of those captive turkeys have bred with the wild turkeys, resulting in the smoke-phase turkeys.

There is no hard science to back up those concerns.

No, they do not turn color in the winter. They were a new sight for me though.
Posted by Chas S. Clifton at 2:07 PM No comments:


Unlike the graves mentioned in "Graves in the Woods (1)," these are not human graves, I think — unless they were infant twins — which would be extremely weird.

More likely they were for two pet animals, small dogs or cats. We found them near a Forest Service road when we first moved here in 1992, and they looked pretty much the same back then. The Mason Gulch Fire of 2005 missed them by a few yards.

I wonder if whoever  buried them there ever comes back for a visit.
Posted by Chas S. Clifton at 11:56 AM 1 comment:

Email ThisBlogThis!Share to TwitterShare to FacebookShare to Pinterest
Labels: Colorado, death, Mason Gulch, Wet Mtns.
Newer Posts Older Posts Home
Subscribe to: Posts (Atom)
"The point was no longer to show one's hardihood. The point was to be there."