In the Big Science News: Korean scientists have cloned a dog -- to be exact, a rather handsome Afghan.

This is all very interesting, but other than the anti- cloning tizzy that it has thrown Bay Area animal activists into-- I'll try to find a link-- one of the interesting aspects is how self- elected "experts" have weighed in on how dumb a choice the Afghan is.

Says one, shrink and pop dog author Stanley Coren: "The Afghan hound is not a particularly intelligent dog, but it is beautiful." He ranked the Afghan hound last among 119 breeds in temperament and trainability."Many people who opt for the cloning technique are more interested in fashionable looks," he said. "Whenever we breed dogs for looks and ignore behavior, we have suffered."

Actually I would agree with him that far-- but he may be picking the wrong breed for the wrong reason. The modern show Afghan may be a shadow of its Asian ancestors, but the primitive wolflike habits and physiologies of the Middle Eastern and Central Asian sighthounds, which I have hunted with for twenty five years, do not easily lend themselves to simple analysis. They are not robotic, while some "intelligent" breeds like Labs can be.

My friend John Burchard, who studied at the Max Planck Institute and under Konrad Lorenz, and who has worked with salukis and falcons for forty- plus years, put it this way today: "In general the dogs that score highest for obedience, and thus for "intelligence" in Coren's system, do worst at problem solving. The best problem solvers seem to be wolves -- and Basenjis, who score very low in Coren's scheme. Don't know if anybody's tried sighthounds on the problem solving tests ... but those of us who live with them can't help noticing certain things..."

(One of our sighthound group describes a cartoon in which a bespectacled scientist stands at the top of a cliff demanding that a recalcitrant Afghan "Jump!". Below the ground is littered with the corpses of Labs, collies, shepherds....) 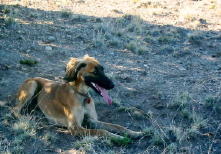 A few more comments from primitive dog aficionado friends-- both scientists incidentally. Vladimir Beregovoy wonders whether modern show and pet breeders who favor "placidity" would breed from what he calls "Houdinis " like my Kazakh female Ataika, who routinely escapes from 8- foot fenced enclosures though no bigger than a whippet. And Dr. John Burchard adds re genetic depletion:

"There is much talk of genetic diseases in purebred dogs.

"It seems the most serious one, ultimately fatal, is called "registration."
Posted by Steve Bodio at 6:28 PM

Sharing my life as I do with Scottish Deerhounds, and currently one smart and fast little Borzoi bitch too, I can only yell, shout, and stamp my feet going YES!

I've been so incredibly pissed off about Coren's anti-Afghan hound comments ever since his opinion got picked up by the press. I'm glad someone is calling them on it.