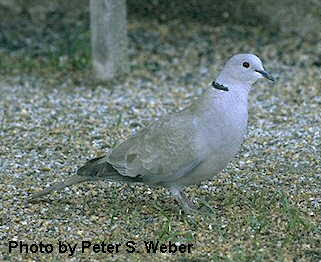 This summer we have been hearing Eurasian collared doves along the Arkansas River, so they have arrived in south-central Colorado. The call is a "coo-COO-cup" (or so David Sibley transliterates it), distinct from the mourning doves' calling.

I noticed them last May in Magdalena, New Mexico, where Steve Bodio said they had arrived a few years earlier on their transcontinental progress from the Bahamas, where they were accidentally introduced. Sibley's recent guide to Western birds had them in the very SE corner of Colorado, perhaps Baca, Prowers, and Las Animas counties.

Now they are higher up the Arkansas: Florence and Salida.

On hunting, the Colorado Division of Wildlife splits the difference. Whereas mourning doves (native) have a season and a bag limit, rock doves (a/k/a feral pigeons, introduced) have neither. Eurasian collared doves may be hunted during the September-October mourning dove season, but there is no bag or possession limit.

I thought that maybe I was just hearing them now because I had become more sensitized to doves other than mourning doves on the recent New Mexico-Arizona trip. But M. says that she never heard them down in Florence before this summer, and that she would have known had she heard them before.

White-winged doves, meanwhile, are not here in Colorado--I think. I was watching some Arizona white-winged doves when the snake bit me. So now I have a complicated set of mental associations: rattlesnakes and Stevie Nicks' Disco Era hit "Edge of Seventeen" with its chorus:

I am going to blog about this damn bird! The most irritating noise in the world — you have my sympathy...

We have recently seen these birds under our feeder in Aurora, I originaly thouth that they were early Mouring Dove, but it was early February when they first appeared. Still way too cold for Mourning Doves. Hope they stay around.

I think this must the type of dove we've been seeing in Ft. Collins for the past 3-4 months. I've been trying to identify a very strange call and I'm sure it's coming from these doves...saw two on a power line and one was facing the other and bobbing his head up and down and making a very odd low electronic "voice" sound that for all the world like - and I know this is crazy - "strawberry shit"!
It's three distinct syllables, but no "coo" sound at all. Anyone else heard this from doves. I don't see them very often anymore, but they are in my trees and making this sound many times during the day, every day. They used to hang out under my bird feeder and strut around the patio.

I just noticed outside at my feeder that I have a pair of these Eurasian collared doves. I live in north central Colorado.

I have seen these birds in my neighborhood south of Denver!

I have these ring necked doves visit my fish pond for a drink. They are definitely bigger than morning doves and their tails look like an old fashioned fan fully extend 180 degrees when they fly much like a pigeon. I thought their rings went around their entire neck. Anyway, I live in west Windsor, Colorado.

Monument Hill Pair
We have a pair feeding under our bird feeders in Northern El Paso County. Our bird book does not mention the Collared Dove. They match the picture exactly and the ring is just around the back of the neck and they are much larger than Mourning Doves. Fun!

I am very familiar with the Eurasian dove (ring-necked/collared dove) after living in South Florida. Today I was astonished to see two of them in my yard in Littleton, Colorado (Douglas County).

Have been seeing them in Evergreen sporatically for the last two summers. Had them winter over this year and more in the neighborhood now than ever. Seemed to have pushed the std Morning Dove out.

I live in the Boulder area anyone have any recommendations for hot spots to hunt these birds in the area?
Thank you for your time and advice!

I don't know about Boulder County, but they are certainly in the Arkansas Valley. They seem to like to be in town more than mourning doves do, but then they spread into the surrounding areas.

Two adults, one junior, seen both this fall and last in our back yard in Lafayette, CO

I live in Erie, CO. I found a nest with the male and female tending to it in my ornamental cherry tree this morning. What a treat!

These birds have the most annoying call...hubby calls them dinosaurs. Anyone else observing very aggressive behavior? We watched a pair of them tear up a nest and kill the nestlings of a pair of Finches. They also seem to be trying to drive out the Mourning Doves - way less of them and more Eurasian this spring.

They have been here in Phillips Co for several years and have pressured the mourning dove out of town by either intimidation or devouring the morning doves habitat.

I really do not care for their Coooing.

There is no bag limit on this variety during the regular dove hunting season in case there are any avid bird hunters reading this, wink,wink

They sound like they're puking and have driven the mourning doves away.

That screechy call, yes. But at my place, mourning doves and collared doves co-exist. Collared doves seem to do better in town settings, however. And you are right, they are in season year around.

I've got them in my yard in Gunnison and this morning I saw a small flock of 5-10 birds in Crested Butte.

Just saw a pair in Thornton.

I live in pueblo west and their are many, many of these dove here. We enjoy them.