"All My Flycatchers," Season 3 Final Episode 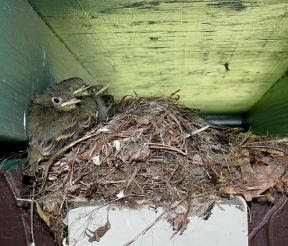 I was away on August 1st. On the morning of the 2nd, I found a dead fledgling beneath our nest of Cordilleran flycatchers.

The rest were gone. (The photo was taken on July 31st. Only three fledglings show, but the fourth could have been blocked by the others.)

Once again, four babies and three survived--we hope. Maybe we can catch a glimpse of them if they are still near the house.

And that wraps up this season of All My Flycatchers.
Posted by Chas S. Clifton at 10:21 PM