Trash-picking and a Memory of Troop 97. 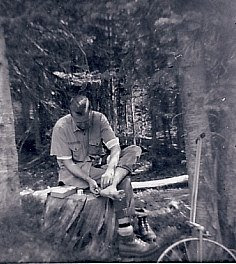 More volunteer work for the Division of Wildlife today: I spent about three hours cleaning camping areas and chatting with a couple of DOW guys and the other volunteers.

At the end, the local district wildlife manager, another guy, and I needed to return to the boat ramp where our vehicles were parked. I hopped in the back of the DOW pickup, since the radio gear in the cab makes it impossible to sit three abreast.

I'm riding along the dirt roads, sitting on the tool box, gazing at the mountains and the cloud-dotted sky, and I get this sort of kinesthetic memory oozing up from my body.

Then it hits me--Boy Scouts!

It was like being 12 again and working on some project for a merit badge or the Hornaday Award.

Only the truck would have been Forest Service green instead of Wildlife grey. Wayne Parsons, the scoutmaster, was a recreation manager on the Roosevelt National Forest and big on Scouting projects that dovetailed with Forest Service recreation.

Parsons, who worked for the US Forest Service, also directed the troop in work on the Hornaday Award, which several Scouts received. This national award recognizes significant contributions to conservation, and is rarely given.

For instance, we might make a five-day backpacking trip and map and measure trails the whole time. (I bet he did not even have to take vacation days!). I remember helping to survey a new campground site and learning a little about using a plane table alidade.

In my photo, Wayne Parsons doctors his blisters partway through a backpacking trip with Troop 97.

I still have the Hornaday medal. Since it just sits in its box, I might offer it for sale. Apparently eBay is full of Scouting-memorabilia collectors.

UPDATE: The Hornaday medal brought $879 at auction, which should pay for a trailer-camping trip in the Black Hills this fall.
Posted by Chas S. Clifton at 3:50 PM