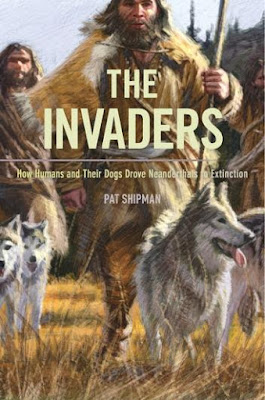 It has been suggested by Steve Bodio and others that modern humans' migration into the Americas across the Bering land bridge was dependent on an ally — the dog.

Until they had dogs, a continent with giant bears, giant wolves, and other toothy things was just too intimidating.

Meanwhile, back in Europe, did dogs help modern humans out-compete Neanderthal? (And did Neanderthals themselves have wolf-dogs? The evidence is ambiguous.)

National Geographic interviews anthropologist Pat Shipman, author of a new book on how dogs may have helped modern humans to out-compete Neanderthals:

"[Early wolf-dogs are] large, have big teeth and all those predatory, dog/wolf characteristics. You have to assume from the anatomy that they could track very well from the scent of an animal. They were built to be fast running, as wolves and most dogs are. Humans don't run terribly fast. We have a crappy sense of smell. We do cooperate with each other, which is helpful, and we had long-distance weapons, like spears and bows and arrows.

"Neanderthals seem to have specialized in stabbing an animal at close quarters with handheld weapons and wrestling it down. We had weapons we could launch from a distance, which is a very big advantage. There's a lot less risk of personal injury."

(The people today with comparable skeletal injuries to Neanderthals are rodeo riders.)

But I have another scenario in mind:

Hunter 1: Hey, Little Hawk, look at White Dog! She thinks there is something in that cave.

Hunter 2: I bet one of those squat ugly bastards is lurking in there. Or his big ugly woman.

In every instance of migration and invasion, there is one common behavior. Call it inter-marriage, though that may be too gentle a term. The Neanderthal didn't get wiped out; they got absorbed.

It's true that most Eurasian people have some Neanderthal DNA. But how did it get there? Rape or inter-marriage? Of whom by whom?