You Got Two Buffs for a Gator? 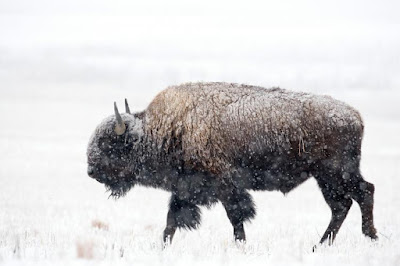 The American bison, a/k/a buffalo, is about to be named our national mammal, thanks to the National Bison Legacy Act, which passed through Congress last week and now awaits the president's signature.

I am all for this —  and let's have a national reptile next. The American alligator?

And why stop there? Put me in charge of America and a buck will mean a buck. In other words, take George Washington off the one-dollar bill and replace him with a buck whitetail deer.

Some people in the Treasury keep saying we should switch to a one-dollar coin: more economical, etc. But they lack the guts to pull in the paper money and force a switch. Well, do it! If the Canadians can put a loon on their dollar coin and call it a "loonie,"  we can have Odocoileus virginianus and call it a "buck."

All will be spelled out in the Charismatic Megafauna Currency Act of 20XX.

The buffalo belongs on five-dollar bill. It just feels right to me, and there are five letters in bison.

Not to be totally mammalian, I will order that the ten-dollar bill carry the image of the aforementioned alligator.

The fifty . . . maybe a bighorn sheep? Something solid and Western? Elk?

The hundred, formerly known as a Ben Franklin, would now be a bald eagle. (Yes, there were other eagle coins in the past. We'll sort it out.)

But the eagle is not worth what it used to be, so how about a five-hundred dollar lynx? Think of the linx/lynx puns.

Or a thousand-dollar bill, for the convenience of those needing to carry large sums of cash around. Reach into the Pleistocene and decorate it with a stalwart Columbian mammoth.

"He showed up with a roll of mammoths — makes you wonder what he does for a living."

"Anyone got two buffs for a gator?"

Forget all this Andrew Jackson/Harriet Tubman stuff. My proposed legislation will have people arguing over animals!
Posted by Chas S. Clifton at 6:00 AM

We can print those banknotes and then keep them in the basement of federal reserve banks in case we have to do an emergency swap to defeat forgers.

It has always been my understanding that there is "Monopoly money" stashed away now for that very purpose.

You've got my vote for the changes.