Blog Stew by Reservation Only 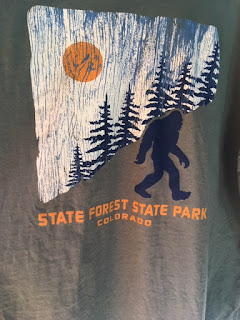 Too many things to blog about. So try some blog stew with these ingredients!

• Will you find a campsite? Beginning in 2020 all Colorado state park campsites will be available by reservation only. And yes, I think that's progress.
Bigfoot, however, cannot be reserved. You just have to be there.

• PEEGS!! I can say that they are already here, although not in large numbers.


Feral pigs cause an estimated $1.5 billion in damage each year, especially to crops. Now concern is mounting they could be at the doorstep in parts of the Mountain West.

The pigs — which an expert at the USDA has called "one of the most destructive and formidable invasive species in the United States" — could come across the Canadian border into Montana, or traipse into Colorado from the feral pig stronghold of Texas.

Once Texas was the Comanche Empire. Now it's the Pig Stronghold. Progress?  To continue:


In Canada, where feral pigs are now firmly established in Saskatchewan, Alberta, and Manitoba, a University of Saskatchewan researcher described wild pigs as "ecological train wrecks." A recent study conducted in Mississippi found that species diversity is 26% less in forests that have been invaded by swine.

Apparently some landowners welcome them, maybe so that they can charge hunters a trespass fee.

Where have I seen them? Around Pueblo SWA, just a couple of times.

• And then there is this: People who spend more time outdoors lead more fulfilling lives, new research shows."