In the video, wolf teachers encourage a grizzly sow to reduce her carbon footprint by not having too many cubs.

Last month, supporters of wolf reintroduction on Colorado's Western Slope said they had the necessary 200,000-plus signatures to put a measure on the ballot, and Colorado voters will make their choice on "Initiative 107" in November 2020. The initiative begins,


(a) Historically, wolves were an essential part of the wild habitat of Colorado but were exterminated and have been functionally extinct for seventy-five years in the state;
(b) The gray wolf is listed as an endangered species on the commission’s list of endangered or threatened species;
(c) Once restored to Colorado, gray wolves will help restore a critical balance in nature; and
(d) Restoration of the gray wolf to the state must be designed to resolve conflicts with persons engaged in ranching and farming in this state.

Item (c) is essentially a nature-religion theological statement. Scientific ecology has moved beyond the "balance of nature" thinking to more dynamic and complex ideas of constant change. Even the "trophic cascade" model, as applied to predator/prey relationships by Aldo Leopold in the early 1900s,  is now questioned by some researchers.


"It's a really romantic story," Utah State University ecologist Dan McNulty said. "It's a story about a world that doesn't really exist." 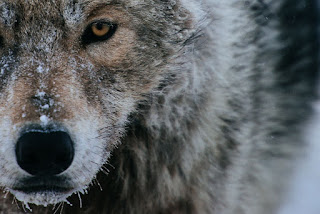 A year ago, the Colorado Parks and Wildlife Commission voted 7-4 against wolf reintroduction. This month, former CPW commissioner Rick Enstrom, who served on and earlier "wolf working group," offered a negative opinion.


Predation [of elk herds] is hardly the only problem with wolves in Colorado, says Enstrom. The biggest issue is money. The proposed initiative calls for wolf management and predation compensation to be paid out of the Colorado Parks and Wildlife (CPW) wildlife cash fund “to the extent that they are available.”

Where compensation for livestock losses will come from when there is no money available in the wildlife cash fund is left unstated.

The initiative states that the General Assembly "shall make such appropriations as are necessary to fund the programs authorized and obligations, including fair compensation for livestock losses that are authorized by this section but cannot be paid from moneys in the wildlife cash fund, imposed by this section."

In other words, costs created by the wolf-reintroduction would have to compete for funding with highways, social programs, universities, prisons, and everything else that the state has to pay for.

And the perpetually stretched-thin district wildlife managers (wardens), techs, and biologists will not have another huge responsibility dumped on their plates.

I hate to bang on about money, but 90 percent of the voters probably do not realize that Colorado Parks and Wildlife is not funded by the taxpayers — like the Dept. of Corrections, for example. CPWis funded mainly by license sales, user fees, some federal excise-tax money, and donations (the state income tax-refund donation).

And what license fee brings in the most money? Out-of-state elk licenses. So not surprisingly, the Rocky Mountain Elk Foundation is against re-introduction.


“To be clear, RMEF strongly opposes the forced introduction of gray wolves to Colorado,” said Kyle Weaver, RMEF president and CEO. “We have witnessed 20 plus years of lies and litigation in the Northern Rockies concerning wolves. This Colorado effort is driven by the same groups using the same tactics to accomplish their agenda.”

Cat Urbigkit is a writer and an internationally known authority on livestock guardian dogs, which she and her husband (and others) use to keep wolves and coyotes away from the sheep on their western Wyoming ranch. She bluntly accuses the pro-wolf group of wanting to create a wildlife Disneyland, and she notes that the Rocky Mountain Wolf Project is funded mainly by the Tides foundation, rather than grassroots donors.


If one were to believe the spiel, wolf advocates are benevolent custodians of the public interest, and ranchers suffer from “the myth of the wolf” and “a fear deeply ingrained” that can be cured with education. A few recent examples of this custodial role show that the advocates propose “a wolves for thee, not for me” landscape – one in which decisions are made by unaffected residents of population centers on behalf of uneducated rural serfs (serfs whose work feeds the nation and are most impacted by ever-expanding wolf populations).

Anti-reintroduction groups, such as the Rocky Mountain Farmers Union, are organized at Stop the Wolf, where they have plenty of photos of what wolf attacks look like as well as information on political opposition.

For a longer take on the pros and cons of wolf re-introduction, you should read this Colorado Politics piece from September 2019, "Is It Time to Bring Gray Wolves Back to Colorado?

Actually, if the billionaire-funded Tides foundation wanted to do it right, they would offer to pay for the reintroduction, instead of sticking an always-underfunded state agency with the job.
Posted by Chas S. Clifton at 2:23 PM

I've linked back a post to your post here on my blog, and I have a couple more in the hopper.

This is a topic I'm really familiar with, having done some legal research side prior to wolves coming in to your neighbor to the north, and also having a personal and economic interest in the overall story as well. Anyhow, as one of my upcoming post will related, one story I never believed back when the argument over wolf reintroduction was going on here (and I was in favor, but for subtle reasons), was that they'd stay put.

Any way a person looks at it, a natural reintroduction is better than a forced one. And any way you look at it, wolves spread within their eco niche much much faster than people suppose they will. If they're in Colorado now, and they apparently are, you don't really need to do anything.