You may already know that in 17th-century America, there was New England (Plymouth, etc.), and south of that was New Amsterdam (New York), and south of that were more English colonies. But in between, in parts of what are now Pennsylvania, New Jersey, and Delaware, was New Sweden, which lasted roughly from 1635–1655, when the Dutch took over.

You may have even heard that the traditional American log cabin came from New Sweden. Further south in Virginia, the English colonists were building  houses with wooden trusses whose walls were filled with with wattle-and-daub and later with brick, "Tudor" style. In New England, they did something similar but with clapboards.

But the settlers of New Sweden, who were largely ethnic Finns, put their axes on their shoulders, looked around at the trees, and started building log houses. At that time, today's Finland was part of the kingdom of Sweden, and the two populations were intermingled.

As the log cabin building style was diffused on the American frontier, a lot the refinements were lost, such as how to build log joints that shed water.

Here, in some kind of "living history" village, you can see Finnish carpenters building a little house in the traditional way. Lots of nice broad-ax work there!

If you want to get deeply into the 17th-century history of the Atlantic seaboard, then I recommend The Barbarous Years: The Peopling of British North America--The Conflict of Civilizations, 1600-1675.

Usually, all you get is Jamestown > Pilgrims > Salem Witch Trials > American Revolution, and this book fills in a lot of gaps.
Posted by Chas S. Clifton at 7:14 PM 1 comment:

On Attracting and Repelling Bears 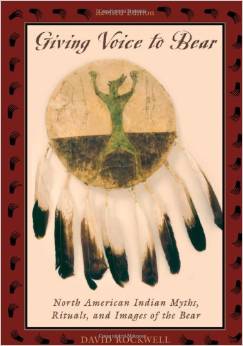 • Illegal campsites are usually trashy. Yes, that's a stereotype, but stereotypes have to come from somewhere. And when you have trash in the Colorado mountains, you have bears. Hungry bears. Bears that don't want you to get between them and the food.

• Man gives bear the angry-hominid treatment in a Swedish forest  (You Tube).

I have been told that Eurasian brown bears, Ursos arctos artos, like North American black bears, are generally shy of people. Is that because they both primarily live in forests? (But some live on steppes, I know.)

Likewise, some argue that grizzly bears, Ursos artocs horribilis, which were originally found on the prairies (although often in riparian corridors) and polar bears have a "take no prisoners" attitude because they have nowhere to seek refugre if, for instance, their cubs are threatened.

Evolution or adaptation to pressure from humans?

Black bear mamas — and I have seen this a couple of times — will send the cubs up a tree and run away themselves. Whether that is for self-preservation or to lure away the perceived threatening agent, I will let someone else decide.

• If you have read this far, you too are fascinated by people's complex relationship with bears. One takeaway from David Rockwell's Giving Voice to Bear — which includes some northern European as well as North American cultural material — is that bear-hunting must be the most ritualized of all hunting.

More than any other animal, Bear is not only quarry but teacher. A great deal of "bear magic" is not just hunting stuff but herbalism. People say that they or their ancestors learned how to cure from watching bears — or from getting the power of bears.

But can bears teach them how to live in the woods?
Posted by Chas S. Clifton at 12:15 PM No comments:

Email ThisBlogThis!Share to TwitterShare to FacebookShare to Pinterest
Labels: bears, camping, Colorado, herbalism, hunting, Indian tribes, Sweden
Older Posts Home
Subscribe to: Posts (Atom)
"The point was no longer to show one's hardihood. The point was to be there."