A Red Fox with a Missing Tail 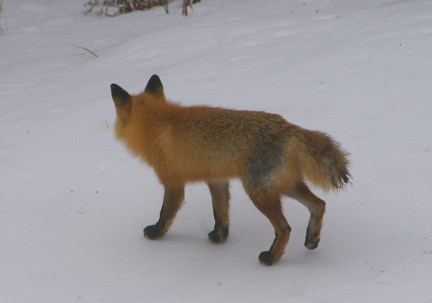 While watching birds out the bedroom window yesterday I saw this fox go by. Obviously something has sheared off part of its tail — a pursuing predator?

It walked to each of the sunflower feeders and checked for fallen seeds, then circled around the house and climbed the hill up into the trees.

I thought it seemed a little stiff in the hips, but was I projecting that, still thinking of the loss last month of Shelby, our arthritic old dog?

We watched it from the kitchen, and M. said something about the hard lives of wild animals.

The Hummingbird Scale of Badass-ery

I snicker a little every time that I see a stained-glass "sun catcher" with a hummingbird image, or anything like that.

Is there anything more vicious than a hummingbird? They live in bird Valhalla — they would rather fight than eat.

Right now, our hummingbird feeders attract two species: broad-tailed and black-chinned. (And very rarely a calliope, but I am not considering them here.)

Yes, we feed them,  and in return we have a continuous showing of The Dawn Patrol on the veranda — heavy drinking followed by aerial combat.

This website collects references to hummingbirds in various American Indian mythologies (without sources or context), but I am going with the Aztecs: they are reincarnated warriors.

The black-chinned hummingbirds seem to have a slim advantage over the broad-tailed hummers in airborne bluff and intimidation, but the real nasties are the rufous hummingbirds, who show up mid-summer on their southbound migration. They are "the feistiest," according to Cornell University's All About Birds website.

They rule the skies for a couple of weeks and then, mercifully, are gone.
Posted by Chas S. Clifton at 7:01 PM 2 comments:

Email ThisBlogThis!Share to TwitterShare to FacebookShare to Pinterest
Labels: bird
Older Posts Home
Subscribe to: Posts (Atom)
"The point was no longer to show one's hardihood. The point was to be there."