After the Fire Stopped 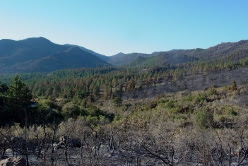 Another hot day was coming, so I got up early, fed the dogs, and walked up the Forest Service road to look at the burn. The good news was that Babcock Hole was not the blackened cauldron that yesterday's Chieftain cover photo (see July 13 entry) led me to expect.

LEFT: Babcock Hole four days after the Mason Gulch Fire. This area is mostly just out of the frame to the right in the aerial photo below.

The bad, or at least spooky news, was that at some point (early Friday morning?) the fire had crossed our road. Had the wind blown from the SE, the fire could have circled around into the houses. But it had stopped, whether on its own or due to slurry drops, I do not know. And then a hand crew had scraped a fire line along the edge of the burn.

Robert Hamilton, who owns the small ranch at the end of the road tells his experience. (He never evacuated.) Fire-fighting has cost $3.8 million so far.

And I was right about the the T-shirts: "A silk-screening outfit from Silver City, N.M., was doing brisk trade with T-shirts and caps commemorating the Mason Gulch Fire."

Fluorescent pink, yellow, and green plastic flagging is all over the place. One strip on a neighbor's driveway was marked as follows, apparently as instructions to firefighters defending the house: "VACANT. Broken slider window. Sited 7-9-05? Propane needs shut off. Scrape away duff from deck & structure. Remove wood pile against house front."

I came home after an hour. M. was just getting out of bed. "I have news for you," I said. "A hermit thrush is singing in Babcock Hole."
Posted by Chas S. Clifton at 11:24 AM