SRO at the Baptist Church

The little store out on the state highway was probably having its greatest day ever on Fiday, its parking lot full of fire vehicles and loitering crews. Driving past, I saw engines from Fowler and Manzanola (both little prairie towns) among others, and a serious-looking 6x6 rig from the Platte Valley department, from the mountains southwest of Denver. They should know forest fires: the country is similar to ours and it has had some big burns in recent years, including the giant Hayman Fire in 2002. 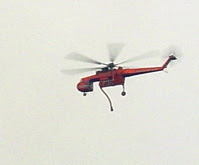 A new helicopter air tanker had joined the air show, slipping through the smoke like some kind of giant insect with a dangling proboscis.

Every pullout on the highway was filled with emergency vehicles, television trucks, or gawkers, but as M. and I drove past on our way down to town, we could see through the smokey air across to our road, and it was still surrounded by green trees. Fire engines were parked here and there in driveways. 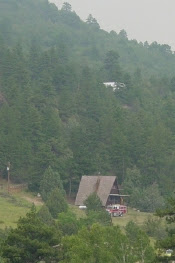 The fire itself grew during the day to something more than 1,500 acres. All the aerial slurry-dropping had not stopped its movement when the winds blew. The steep ridge where it started was hazardous terrain for ground crews, who were just trickling in: an imate crew from the nearby state prison plus elite Hot Shot crews from elsewhere. By Friday evening, the "army" had grown to 350 firefighters, counting managers ("overhead"), public-information officers, engine crews, ground crews, and others.

I had given the sheriff's office the number of the friend's house where we were camped, our trailer set up on a dead-end road next to a cow pasture. That afternoon my friend Hal walked up to the trailer and said he had gotten a recorded telephone message about an "informational meeting" to be held at 7 p.m. at the small Baptist church 2.5 miles from our house. I drove down there, about ten miles from our temporary camp, shooting these pictures on the way.

This is the new Forest Service at work, putting on a good show for local residents and the news media (I actually heard the phrase "your tax dollars at work"). It's a long way from my father's day, when he was a district ranger managing a fire with a rotary-dial telephone and a radio, trying to coordinate everything and take calls from the Rapid City Journal too.

The district ranger and the sheriff orchestrated the show, speaking before the packed pews and TV cameras in front of a blown-up topographic map. It was standing room only--I will bet that church is not so full on Easter Sunday. More evacuees from the east side of the fire, in the next county, were there, along with my neighbors. A lot of bureaucratic syrup was poured, but the essence of the presentation was this: The fire is not under control, and you all can't go home yet.

The management level had outgrown the trailer parked near the church and was moving to the high school in town, 15 miles away. We now had a "Type 2" fire with a name, the Mason [Gulch] Fire, and if kept growing, I suspected that soon the T-shirt vendors would be arriving. Wildland firefighters often go home with commemorative T-shirts produced on the spot.
Posted by Chas S. Clifton at 11:53 AM