The changing language of weather 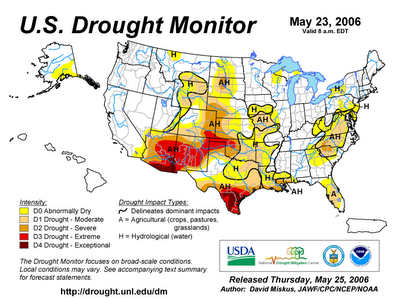 At this time of year, I obssess over the couple of minutes devoted to the evening weather report by local TV stations, as well as over weather graphics like the drought map above. (Click the image for a larger version.)

It shows my home in the tan "moderately dry" belt, whereas the Hansons are in the "extreme," which they well know, and the Bodio+Tazi household likewise.

Listening to TV meteorologists, I am hearing another change in Colorado weather language. Here are three terms that have entered the language since I was a kid:

1. Monsoon. From Arabic via Portuguese and Dutch, it was originally a wind that brought seasonal rains in South Asia. Some time in the 1970s, I would guess, people started referring to the late-summer rains (when we get them) in the American Southwest as the quote-monsoon-unquote. Now the quotation marks are disappearing, you might say.

2. Upslope. Originally an adjective, "upslope conditions," describing the flow of cool moist air up against the Eastern Slope of the Rockies, producing overcast skies and either rain or snow. An ideal April combination for heavy snows involves high pressure over western South Dakota combined with low pressure over the Texas Panhandle.

But now "upslope" has become a noun, as in "I wish this upslope would go away, and we would have some sunny weather."

3. Overnight. This is the new one that they are teaching at TV-meteorologist school, I guess. No longer do we have "night" or "nighttime." In another case of an adjective becoming a noun, we now hear such pronouncements as "Expect clearing skies during the overnight."