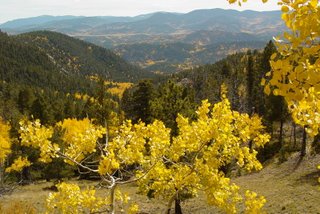 The photo shows aspen trees among the conifers in the Wet Mountains of southern Colorado on Monday, October 2nd. The following day a little squall line of thunderstorms came through and ripped off most of the golden leaves. The same thing happened with the big willows and cottonwoods along our road.

Meanwhile, news reports are full of gloom-and-doom about the decline in aspen groves. (Link may expire.)

One Forest Service ecologist said the causes were drought, increasing grazing by both cattle and elk, disease, and insect infestations.

I am surprised no one has mentioned fire suppression. Around Cripple Creek, for instance, so many aspen groves along Colorado 67 clearly represent little 19th-century forest fires, probably started by sparks from steam locomotives back when today's state highway was a railroad grade.

How many of the aspen groves we are used to seeing resulted from 19th or early 20th-century forest fires, before the era of serious fire suppression started mid-century?

When some acquaintances of ours, who live amid thick firs in the Sangre de Cristo Range near Westcliffe, did a massive tree-thinning to protect their home from wildfire, suddenly they had aspens! The last time I was there, the area around their house was full of knee-high aspen. Will they make it to maturity? That seems to be part of the issue.

Update: I went prowling on LexisNexis and found a trade-journal article that quoted David Skinner, wildlife biologist on the Sawtooth National Forest in Idaho:

Because aspens take advantage of the regenerative opportunities provided by forest fires, Skinner emphasized that the only real solution to their regrowth in the region would be less fire suppression.
Posted by Chas S. Clifton at 8:27 PM