An Impressionist on the Purgatory 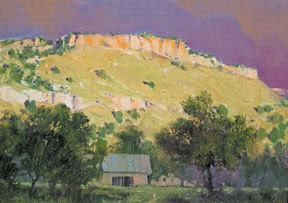 I want to see this exhibit by painter Michael Ome Untiedt of paintings from the Purgatory canyon country, now at the Sangre de Cristo Art Center in Pueblo. (Link from the Pueblo Chieftain may expire.)

Untiedt admits that he broke a social code:

I was kind of raised with the notion that it's a secret place," said Lamar native Michael Ome Untiedt. "You don't talk about it - you don't want to see spandex bicyclists down there. Part of the reason the Army can take over is because it's been kept a secret."

Ironically, the earlier acquisition by the Army of the ranches in the Piñon Canyon Maneuver Site did create more public access to the area, and that access created more awareness of just what lies south of US 50.
Posted by Chas S. Clifton at 12:14 PM