A Walk in the Wet Mountains 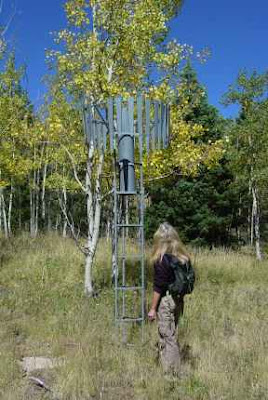 One area of the Wet Mountains--two named peaks and their connected ridges--has fascinated me since the 1980s and could occupy me for the rest of my life.

Although parts have been logged in cycles since the 1880s, much of the logged areas are covered with heavy second-growth timber. Other deep canyons have never been touched by logging, mining, or ranching--or barely touched.

It's indicative that an entire steam-powered sawmill was abandoned in the 1880s and officially forgotten by the Forest Service -- although it's on national forest land -- until about fifteen years ago. (Now there is a hiking trail to it, with appropriate signage.)

Taking one of our cross-country hikes on Monday, M. and I happened across this precipitation gauge. The hanging metal strips break updrafts that might interfere with rain or snowfall measurements.

Next to it was a concrete slab, dated 10/1970, with threaded rods sticking out of it, that might have held a similar little tower.

We should have climbed up to see if there was oil in this one, as this article explains, but we did not, so we are left wondering if anyone reads it, or if it is a relic from some study or project long since completed.

"That's what bothers me about the government," M. said. "They're always leaving stuff in the woods."
Posted by Chas S. Clifton at 9:46 PM

As the sawmill story illustrates, I think there is plenty for contemporary historical archaeologists to do here too.

But as I have written before, the FS is not too good on institutional memory.