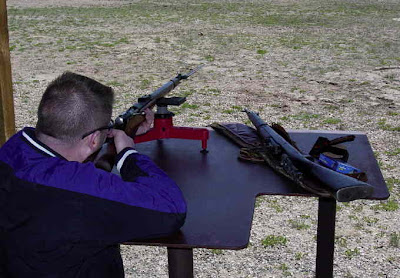 My English department colleague Professor S. has acquired a Mosin-Nagant rifle, one of jillions that came off the Tula assembly line in 1943 during the Great Patriotic War.

They are solid and accurate rifles, still inexpensive in the basic infantry model, and you can buy lots of Warsaw Pact-era cartridges cheaply too.

Prof. S. leaves the bayonet on. It dampens barrel harmonics, he says. And we know that Colonel Mosin, czarist class enemy that he undoubtedly was, intended it that way.

Before long, we were vowing death to Bahktinist deviationists and swearing that we would liberate literary study from criminal left-social constructionists.

Email ThisBlogThis!Share to TwitterShare to FacebookShare to Pinterest
Labels: hunting

If you haven't seen it already, this page comparing AKs, ARs, and Mosins seems once again relevant.

My personal favorite is "Your rifle's accessory is a small tin can with a funny lid, but it's buried under an apartment building somewhere in Budapest."