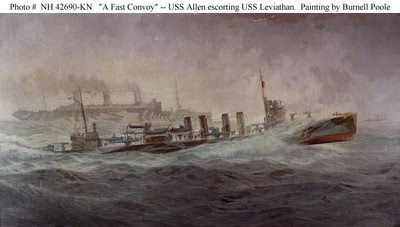 "A Fast Convoy" by war artist Burnell Poole, 1918. (Hat tip to Dan Brock.)
‘I well remember at the beginning of the war,’ Gertrude Stein wrote in 1938, ‘being with Picasso on the Boulevard Raspail when the first camouflaged truck passed. It was at night, we had heard of camouflage but we had not seen it and Picasso, amazed, looked at it and then cried out, yes it is we who made it, that is Cubism.’

It's true. The "dazzle" camouflage patterns of World War I--now the subject of an art exhibit at the Rhode Island School of Design--derived directly from Cubist painting and in many cases were executed (or supervised) by the artists themselves. You can see "dazzle" paint schemes on the World War I destroyer painting and many more patterns on the RISD site.

The Cubists were not the first, however:

The man who is more persuasively claimed as the ‘father of camouflage’ was another successful portraitist and landscape artist. The American Abbott Thayer (1849-1921) was well known for his ‘angel’ paintings, in which he added feathery white wings to portraits of girls and young women. His influence in the early days of strategic camouflage derived from the fact that this New Hampshire conservationist, who admired Thoreau and revered the natural world as ‘God’s studio’, had developed a more scientific interest in plumage and animal coloration. Insisting that this aspect of natural history could be properly understood only by artists and not by zoologists (‘The entire matter has been in the hands of the wrong custodians’) he elaborated in the 1890s his own theory of protective concealment.

Hunters have hidden themselves for a long time, but military camouflage really took off in the 20th century and proliferated in amazing variety, particularly in battle dress. (Russia appears to lead in numbers of patterns.)

Julie Messeloff, a media studies student at Queens College, observes that “cammies” were adopted as hip-hop urban streetwear as early as the mid ’90s. Some wore original surplus and some wore camouflage designed by companies such as FUBU. Anna Sui anticipated the current trend with a sequined camouflage cocktail dress as early as 1996. Now the camouflage/sequin combo has become ubiquitous, along with other creative combinations.

(Of course, the first statement merely shows that Julie Messeloff seems unaware that military surplus cammies have been worn by outdoors types--or those who appreciate sturdy work clothes--for decades before they were "urban streetware." It's sort of like the recent fad for "trucker's hats" on the heads of people who pay $40 apiece for them in hip and ironic shops.)
Posted by Chas S. Clifton at 8:39 PM

Holy cr@P! I've long been a fan of dazzle camo - it just looks so good. RISD is driving distance and - if I play my cards right - I might be able to get down there for the lecture Saturday. Thanks for the tip - J

And think of those other artists, including Eduardo Paolozzi and Ellsworth Kelly who worked on camouflage units during the second war.

A student of mine saw my old cammies in the surplus shop. They do make good hunting wear; however, the material used when i was in wasn't very sturdy and wore out fast with field wear. The new Marpat seems better--i have a set of those.

I do like the 50/50 cotton/nylon blend used in some military cammies, such as my 1980s Woodland set, for its abrasion resistance. But I don't wear them in hot weather either.