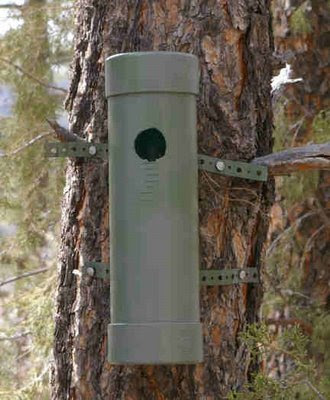 This is a new bird house (nest box, for purists) built more or less according to plans published by the Cornell Lab of Ornithology.

Read about it there or go directly to the plans. Those plans called for 3-inch PVC pipe, and I had some 4-inch PVC lying around, so I used it. A different set of plans in fact calls for the 4-inch.

Not everyone likes the idea of using PVC, but it is pretty much bombproof.

We have several boxes scattered around the property. Generally the birds ignore them. One year some white-breasted nuthatches did raise a brood in one bird house, but then they did not return. Wrens have filled others with little twigs and then ignored them, which I gather is a typical wren thing to do.
Posted by Chas S. Clifton at 4:19 PM

This year our nuthatches (white-breasted and pygmy) are busy trying to poke holes and nest in the west side of the house. Dammit

Bluebirds are coming round now and I just built a house according to the National Bluebird specs. Wow, its big. And today the bluebirds were back checking out new digs for the spring. They didn't check out the perfect house, but liked the old ones that were too small with holes too big according to the specs. The birds figure out what they need and want, not the Bird organizations.

If the inside of this nest-box is smooth, is there not a risk that the young birds will not be able to get out? Experience in the UK shows that boxes like this with smooth interiors can become a death trap. Ideally, the interior needs to be given a rough coating, e.g. a mixture of coarse sand and Sandtex. I have been experimenting with pipes for Common Swifts, see http://www.magikbirds.com/image.asp?title_id=1110 where the problem that I have highlighted is not an issue.

PVC is very smooth. Do fledglings have difficulty clambering up and out of these boxes? Do you roughen the interiors to help them?

You make a good point.

I cross-hatched the inside of the pipe with a knife under the hole. The linked directions also suggest putting a piece of duct tape under the hole, since their claws can dig into it. The tape would have to be renewed annually.