A New Interest in Biathlon

"It’s guns and skis, you know? It’s just a lot of fun," said Bill Weidner of Warrenville, Ill., who has taken up the sport of biathlon in middle age.

He is quoted in a New York Times piece on a small biathlon renaissance. Apparently the fashion section is less like to hyperventilate about guns than the news pages--who knew? 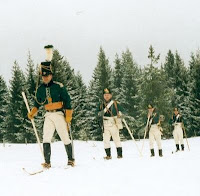 Those are re-enactors in the photo, portraying 19th-century Norwegian ski troops. For more history and images, including this one, go here.

I have always liked the idea of the snowshoes-and-flintlocks "primitive biathlon" too.
Posted by Chas S. Clifton at 1:49 PM

Email ThisBlogThis!Share to TwitterShare to FacebookShare to Pinterest
Labels: skiing